Sabka Saath, Sabka Vikas’, the core idea behind Budget 2020, is the way forward to construct a dynamic economy mobilised by inclusive growth.

The budget has kept its focus on boosting economic growth. Despite significant challenges to revenue mobilisation, the government has increased capital expenditure by 18 per cent in 2020-21.

Developing large solar power capacity alongside railway tracks and letting farmers build solar power generation capacity on unfarmable land is an excellent growth idea. The decision to shut down thermal plants will promote the renewable energy sector and strengthen India’s commitment to abide by international carbon footprint standards. Expanding the national natural gas pipeline network to 27,000km should enhance availability of natural gas across the country, while the proposed investment clearance cell should help in dealing with bottlenecks in the execution of projects. 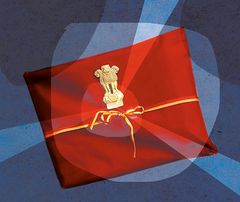 A popular move in the budget was the decision to raise the deposit insurance limit to Rs5 lakh from Rs1 lakh. The decision to cut tax rates for the middle class, with the caveat that lower rates apply only to those who forgo other deductions, and the abolition of the dividend distribution tax at the corporate end were welcomed by the public. This means dividends will be taxed in the hands of the receiver, giving companies the ability to pay higher dividends. It makes manufacturing cheap, providing an incentive to global manufacturers to set up shop in India.

There are about 4,83,000 direct tax cases pending at the income tax appellate tribunal. The announcement of a one-time amnesty for those who are fighting tax demands in various appellate tribunals will put an end to those exercises.

Agriculture has been given a 16-point programme of support. Farm sector budget has been raised by 28 per cent. Agricultural credit target has been raised to 115 lakh crore. Special rail and flight services for the transportation of farm produce will double farmers’ income. A ‘one product one district’ scheme for better marketing and export of horticulture crops has also been announced.

The government proposes to bring out a policy to enable the private sector to build data centre parks throughout the country. Quantum technology is opening up new frontiers in computing, communications and cybersecurity. An outlay of 18,000 crore for the National Mission on Quantum Technologies has been proposed.

A surprise element has been the decision to list the Life Insurance Corporation through an initial public offering. This will facilitate the valuation of the corporation and may fetch the government around Rs80,000 crore, if 10 per cent stakes are released. Social media may frown, but listing on stock exchanges disciplines a company and provides access to financial markets and unlocks its value. It also gives an opportunity for retail investors to participate in the wealth so created.

The debt of the Central government has decreased by 3.5 per cent of the GDP. The World Bank’s ease of doing business index has seen India move up by 79 places. In the global innovation rankings, India has climbed up from 74th position to 52nd position. In the resolving insolvency rankings, India has reached the 52nd position, moving up by 56 places, and in the logistics performance rankings, it has improved by 10 points.

The budget capitalises on this performance by tailoring its initiatives to seek better living standards for all, yield more space to the private sector and draw investments and address climate change. Its success will be seen in the upcoming financial year with improving energy efficiency, growing ease of doing business and great advances in the condition of farmers and the general public.