The US, buoyant over the economic recovery and growth in the first half of this decade, had taken up some reckless policy measures. President Donald Trump took to the populist route after he came to power, following a turbulent political campaign, and unleashed income tax cuts and concessions to the industries. 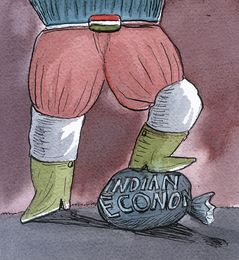 It paid for sometime and industrial growth picked up, but eventually the benefits started bottoming out and a panicked Trump administration had to increase the interest rates. This, naturally, affected demand and growth. Further, Trump’s tariff wars with China led to the opposite of what he originally intended; it led to a slowdown in the industrial production of his own country as the cost of imports, especially steel, rose. The industrial production has now hit the negative side for the first time in the decade. This led to a slowdown in the economy and it would affect the prospects of Trump negatively in the next elections, which in turn would further make him press a series of more panic buttons.

But the problem is that the US is not alone; many global economies are facing the looming clouds of recession over their respective economies. Germany has already admitted the inevitable with finance minister Olaf Scholz pledging €50 billion to ward off recession. However, with China, to whom Germany sells most of its valued merchandise, already facing the heat of a downturn, such cash infusions may not be productive.

China, already reeling under the lowest industrial production in 30 years—at 4.8 per cent—and fighting off a severe domestic debt crisis, is, unlike in 2008, not in a position to play the sheet anchor role to stabilise the global economy.

This leads us to the obvious question. Does India, too, face the danger of recession? With rate of unemployment being high, job losses across many sectors happening fast and slowdown in the demand, as reflected in the layoffs in the automobile sector, many have started voicing the concern. They cite contraction in the quarterly year-on-year GDP growth rate, combined with deceleration in the domestic and foreign institutional investment rates, and sluggish consumer demand as obvious signs of recession.

However, my answer to the question is a big no; India is not likely to slip into recession because most of our macro-economic parameters are currently strong, especially the inflation that is quite under control, giving us enough leeway to play with monetary and fiscal measures. The government is already on warpath to boost the confidence in economy.

Technically, recession is defined as slowdown in the GDP growth in three consecutive quarters. So, even if the April-June (Q1) figures show a negative trend and projection of Q2 happens to be slightly lower, there are strong indicators to support the view that the economy would improve successfully in the quarters ending Q3 and Q4, leading us again to a path of strong growth. Hence, caution would be a better approach to apply in the situation than panic.