The real toll of Kashmiri Pandits

The truth has a curious way of eventually emerging. Since 1990—that is for the last 33 years—the BJP has consistently maintained that the “targeted attacks” on Kashmiri Pandits since militancy began in January 1990 was communal and designed to drive non-Muslims out of the Kashmir valley. The principal proponent of this theory was the governor of J&K, Jagmohan, and his line has since been taken up by the hindutva brigade and peddled without regard for facts or perspective. Indeed, the film, Kashmir Files, was part of this propaganda invective. It focused exclusively on the Kashmiri Pandits. The only Muslims shown were the terrorists. It deliberately ignored the Kashmiri Muslim victims of the terror.

For three decades the saffron forces have been toeing the line that it was Muslim communal terrorism that drove approximately 80,000 Kashmiri Pandits (perhaps more) out of their ancient homeland. The solutions looked for were, therefore, communally coloured. The reading down of Article 370 was similarly motivated by communal considerations. And the numerous arrests that followed—running to thousands—was also communally motivated. All Kashmiri Muslim dissidents were tarred with the same communal brush. Kashmiri Muslims were removed from positions of political power, and from senior police and civil servants’ posts.

The conclusive proof offered by the BJP of normalcy having returned to J&K was the recruitment and posting of several Kashmiri Pandits into the civil services in Kashmir valley. When a few of them were gunned down, many (apparently most) of these freshly recruited cadre went on leave to their families in Jammu and refused to return to their posts in the valley. 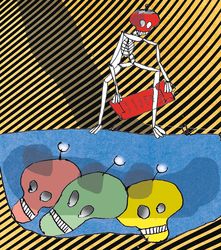 It is in this context that Lieutenant Governor Manoj Sinha confessed, “The country should stop seeing this issue on the basis of religion. A lot of other people have also been killed.”

I have been insistently pointing out since 1990 that the internal evidence generated by the J&K administration itself clearly shows that both communities, and not just Kashmiri Pandits, had suffered at the hands of the terrorists. The principal proof I offered was from page 478 of Jagmohan’s My Frozen Turbulence in Kashmir, his account of his thankfully brief but disastrous governorship (January to May 1990). Jagmohan cites a report from the additional director-general of police, Srinagar, which “asserted that from December 1989 to May 15, 1990, 134 innocent persons had been killed by the militants. The killings of 71 Hindus during this period created fear in the minority community and accelerated the pace of migration of Kashmiri Pandits”.

Jagmohan did not make the obvious calculation that if 134 had been killed, of whom 71 were Hindus, that must mean that the nearly equal number of Muslims killed was 63!

This refusal to acknowledge that the victims of terrorism were almost the same in the two communities continued over the next decades and became acute after 2014. At the height of the communal propaganda unleashed by the hindutva brigade, one P.P. Kapoor, a concerned citizen of Samalkha in Haryana, put in an RTI request to be officially informed of the numbers killed from each community. He received a reply from the deputy superintendent of police, Srinagar. The reply bore no. HQR’s/RTI/S-91/2021/1808-09 and was dated November 27, 2021. It unambiguously stated that the number of Hindus killed “since the inception of militancy 1990” was 89, while “the number of those of other faiths” killed stood at 1,635, more than 16 times that of the Hindus killed!

If even these numbers, generated entirely by the J&K administration, will not persuade the LG’s administration to change course, that will only show that the biased communalism of the saffron forces cannot accommodate itself to the true situation in J&K.