Since September 7, Rahul Gandhi has been on the road. Accompanying him are hundreds of locally drawn Congressmen and women, while thousands line the road. Is this the moment of Congress rejuvenation?

It would certainly seem so from the fright that the Bharat Jodo Yatra is giving the BJP, who are reduced to making cheap cracks about this being a ‘Congress Jodo Yatra’ (of course, it is—and how!) and silly observations on Rahul’s Burberry T-shirt. They are stupefied that even as they launch their own campaign to gain more votes in states they have failed to dominate, Rahul’s yatra passes through precisely those areas to consolidate the Congress vote and, by implication, the solid block of two-thirds voters who did not support the BJP in 2014 and 2019. The BJP possesses its two-thirds majority in the Lok Sabha on the strength of one-third of the vote. The yatra is demonstrating that the denigration of the Congress as rudderless and leaderless is misplaced. After a long spell of political quiescence, the Congress lion is now roaring again. The non-Congress opposition is being signalled that the strength of the Congress remains undiminished in the areas of its strength, without damaging the regional strongholds of potential allies in the coming 2024 general election. 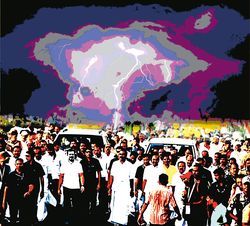 That, perhaps, explains why Rahul is not walking west to east, from Saurashtra to Silchar, to retrieve territory lost to the BJP. Meanwhile, the BJP and its coterie are beginning to learn that India is not the Hindi heartland, that there is much more to India than the slices in which hindutva is dominant. Moreover, by largely avoiding states in which other opposition leaders are at the helm—Bihar, West Bengal, Odisha, Andhra, Telangana—the yatra will certainly—indeed, already has—set the regional opposition parties, starting with Nitish Kumar’s JD(U), on the path to rethinking their strategies for 2024.

The timing is perfect. At some time in the spring of 2023, Rahul will end his yatra in Srinagar, with just about a year to go for the general elections. That leaves plenty of space and time for everyone who has lost out since 2014 to reconsider the path to defeating the BJP in 2024.

What is more, the ongoing shake up of the top echelon of the party, with several aspirants entering or considering entering the election contest for the presidency, without a Nehru-Gandhi on the horizon, throws up the opportunity the party has not had in a quarter century to profile the party’s second-line leadership and the regional standing of those in that second line. For this is in accord with the history of the Congress where “leadership” and “presidency” have for long been in separate hands. Thus, the Mahatma was undoubtedly the “leader” of the Congress for three decades from 1919 to 1948, but was president only once (Belgaum, 1924) and was “leader” even when he was not even a primary member of the Congress. Equally, after the Mahatma, it was Nehru who was clearly the head of the party for 17 long years although lesser celebrities like U.N. Dhebar held the post of president. So, if a distinction is now being made between “leader” (Rahul) and “president” (Gehlot, Tharoor, X, Y, Z) it amounts not to a “puppet president” but a return to an old established practice of the leader and the president being different but working in tandem.

For, if a schism were to develop between the two, as happened in the confrontation between Indira Gandhi (the leader) and the syndicate that provided the president (S. Nijalingappa), it would lead to the kind of internal strife witnessed in 1969-71. Now, with Rahul leading the yatra, while holding no formal office, even while presidential elections are in the offing, the Congress is reverting to type.

This column was written on September 23, 2022, proving that a week is a long time in politics.