When SC contradicts itself, ordinary citizen is left bewildered

Some recent developments have raised questions about Supreme Court's objectivity

Justice is always depicted as a goddess, blindfolded and balancing the scales to show that justice is guaranteed, notwithstanding whoever renders the judgement. Some recent developments have, however, raised questions about the objectivity of even our highest court. Of course, a judgement of the Supreme Court has to be accepted as final. One can understand the judgement of a lower court being reversed by a higher judicial authority. But when the highest court manifestly contradicts itself, the ordinary citizen is left bewildered.

In 2004, Justices Doraiswamy Raju and Arijit Pasayat of the Supreme Court had said of the pogrom in Gujarat: “Modern-day ‘Neros’ were looking somewhere when Best Bakery and innocent children and helpless women were being burnt.” Human rights activist Teesta Setalvad has been playing on the same theme for the past two decades to secure justice for Zakia Jafri, whose husband, Ehsan Jafri, was mercilessly slaughtered in the same pogrom. A highly regarded former MP, Ehsan had spent the entire day of his assassination ringing everyone he knew in besieged Ahmedabad to warn them of the murderous mob that had entered his compound. 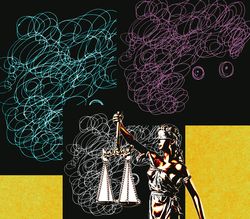 One would have thought that as a deeply concerned and committed citizen, Setalvad was entirely within her rights to do so, and that it was the law’s delays, rather than any negligence or malice on her part, that had led her to fight for 20 years as high as she could get for a cause she regarded as just. But after declaring that Setalvad lacked locus to name herself co-petitioner, the learned judges observed that she had “the audacity to question the integrity of every functionary involved”, and went on to say that all those involved in such an abuse of process needed to be “in the dock”. What is worse, the police took this observation as licence to arrest her. Justice Madan Lokur, a retired judge of the Supreme Court, suggested that the apex court should issue a clarification that it was not its intention that Setalvad should be arrested.

Indeed, courts have no right to order anyone’s arrest. That is the duty of the police. Yet, far from intervening afresh to secure justice for the arrested activist, the court has not sought to follow the injunction laid down earlier by itself that “we are supreme, but that does not mean we are infallible”.

And why is Mohammad Zubair under arrest for a four-year-old tweet after which, as retired justice Deepak Gupta observed, “nothing untoward” has happened. Is it because as Zubair’s lawyer Vrinda Grover pointed out, “the real problem is Zubair’s name, faith and profession”?

Meanwhile, another bench of the Supreme Court comprising Justices Surya Kant and J.B. Pardiwala said of Nupur Sharma, “The way she has ignited emotions across the country... she is single-handedly responsible for what is happening.” Yet, the police have not acted against Sharma the way they have against Setalvad. The reason? The honourable justices hazard an explanation: “She thinks she has backup power”. Of course, the police think she does.

At school we were taught to “pray for justice”. It seems we should teach our children to pray for the right judge.