In 1812, the governor of Massachusetts, Elbridge Gerry, created a new congressional district (assembly segment) called South Essex. This was depicted by a cartoonist as a monster dragon akin to the mythological “salamander”. Thus arose the expression “gerrymandering”, combining the governor’s surname with the monster’s, to denote the manipulation of constituency boundaries to create an undue advantage for one party over others.

“Gerrymandering” perhaps best expresses the consequences of the final report of the Jammu and Kashmir Delimitation Commission. It cannot be challenged in a court of law or any legislature. In effect, this amounts to denying the people of the Union territory their democratic right to equitable representation based on demography. Till now, 56 per cent of the population living in the Kashmir division had enjoyed 55.4 per cent representation (almost but not quite in proportion to their demographic share), and 43.8 per cent living in the Jammu division were represented in 44.5 per cent of seats (marginally more than their demographic share). The new dispensation sharply reduces Kashmir’s share of seats to 52 per cent while increasing Jammu’s share to 47.8 per cent, a full 4 per cent more than their share of the population. The most fundamental principle of electoral democracy—one person, one vote—stands violated.

To achieve this political objective, the provisions of Section 8 and Section 9 of the Delimitation Act have been diluted. Section 8 lays down that the latest census will guide the commission to ensure that, as far as possible, each constituency has about the same number of voters. Section 9 (1)(a) lays down that, in redrawing constituency boundaries, the revised delimitation “shall, as far as practicable, be geographically compact areas” and “regard shall be had to physical features, existing boundaries of administrative units, facilities of communication and public convenience”. 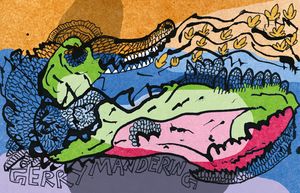 The 2006 Delimitation Commission had proposed that a major part of my Tamil Nadu constituency, Mayiladuturai, be merged with Chidambaram on the other side of the wide Kollidam River. I argued at a public hearing before the commission that their draft proposal violated the principle of “physical features” by linking areas physically divided by the broadest drainage river of the Cauvery delta, besides bypassing the “existing boundaries of administrative units” by needlessly linking separate districts into one assembly segment. Arguments were also raised about how the “facilities of communication” and “economic integrity” would be disrupted because of the delimitation. As for “public convenience”, several hundred of my constituents present signalled retention of Mayiladuturai as their preferred “public convenience”. The commission agreed.

While, however, similar compelling arguments were raised about the absurdity of linking Anantnag in the Kashmir division across the formidable Pir Panjal range to Poonch-Rajouri of the Jammu division, the commission has remained unmoved. The only beneficiary of this strange anomaly might be the BJP candidate pitted against Mehbooba Mufti. Muslim-majority Doda district, too, has been subdivided into three assembly segments to give two of them a Hindu majority. Contortions are also in evidence in Kishtwar, a stronghold of the Lone family—erstwhile strong supporters of the BJP. Kargil, which always returned MLAs of the National Conference, has been merged, much against the people’s will, with Buddhist-majority Ladakh. Thus have politicians been enabled to pick their voters instead of voters picking their politicians.

The only answer would be for the voters of J&K to elect once again, as they have always done, yet another non-BJP government to negate the baleful consequences of the delimitation.