Constitution recognises the profound religiosity of the people of India

A thought-provoking article by a former secretary general of the Lok Sabha, P.D.T. Achary (The Hindu, April 6), is the inspiration for this column. Achary is categoric that secularism, as envisaged in the Constitution, is that “the state has no religion and does not promote any religion”. He describes this as a “foundational principle” of the Constitution and backs it up with the Supreme Court judgement in Indira Gandhi vs Raj Narain & Anr. He might also have added that it is a polity in which the state does not stand in the way of the “propagation” of any religion.

That quibble apart, Achary regrets that owing to there being “too much religiosity” in public life in India, we have “conveniently” changed the meaning of secularism into “sarva dharma samabhaava (all faiths are equal)”. He fears this will “only lead to majoritarianism and, ultimately, to the establishment of a theocratic state”. Is this apprehension justified? 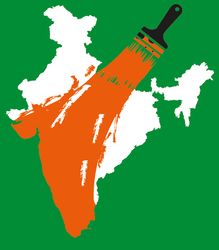 There is no denying that at least since the Modi Raj was established, the state has shown, indeed boasted, that the state does have a religion—Hinduism—and there is no question of keeping the state away from promoting the majority religion. In fact, no quarter is being given to the right to “propagate” any religion apart from the Hindu religion, whose patron is the state. How strangely sits Prime Minister Narendra Modi’s interpretation of constitutional secularism against Nehru’s strictly constitutional stand in not allowing Rajendra Prasad, as president, to attend the inauguration of the restored Somnath Mandir precisely because the state must not, and must not be seen to be, having any religion.

Achary is right in saying Nehru’s argument has had less and less purchase since his early years as prime minister and has virtually disappeared from our political vocabulary in recent times. But is this because in practice we have tended to equate secularism with equality of treatment of all religions or because the state under Modi has been pushing Hinduism to the forefront?

The Constitution defines the desired relationship of the state to religion, and, separately, the citizen to religion. The relationship of the state to religion is as explicitly underlined by Achary. The relationship of the citizen to religion—what I call “societal secularism”—recognises the profound “religiosity” of the people of India, whether they espouse the majority religion or adhere to one of our many minority religions (or to no religion at all). Otherwise, Articles 25-28 relating to freedom of religion, as well as Articles 29-30 relating to the cultural and educational rights of religious, linguistic and ethnic minorities, would have been superfluous. It is because of widespread and deeply embedded “religiosity” that while the state is separated from all religions, an individual and society are given civilisational recognition in the precept: “sarva dharma samabhaava”.

Hindutva has come upon our benighted land not because of society interpreting secularism to mean the equality of different faiths but because of the blatant violation of the constitutional imperative for the state to keep itself out of religion and to not identify itself with any religion. This was exhibited when Modi had been projected as the principal worshipper during the foundation-stone laying ceremony of the Ram Mandir at the site of the barbaric destruction of the Babri Masjid; there is no indication that he will visit the site of the alternative masjid being built 5km away at Dhanipur. There is no adherence to sarva dharma samabhaava in such behaviour on the part of the head of government nor, indeed, to “raj dharma”, as advocated by a former BJP prime minister, Atal Bihari Vajpayee.