Elections have a way of “concentrating the mind wonderfully”. With setbacks in Uttar Pradesh in prospect and the certainty of defeat in Punjab looming large, Prime Minister Narendra Modi has withdrawn the very farm laws he was claiming till just the other day as the greatest gift he had bequeathed to the farming community. Now he is apologising for his “gift” saying he should not have bestowed it without consulting the intended beneficiaries.

So, will he, by the same logic, withdraw his legislation on Articles 370/35A? No, there are no elections in the offing in Jammu and Kashmir. Moreover, the former state sends only a handful of members to the Lok Sabha compared with the decisive 80 from UP. Thus, electoral opportunism is the only sustainable explanation for this sudden—if welcome—about-turn. This is why the agitating farmers remain sceptical of the eventual outcome once the votes are in. 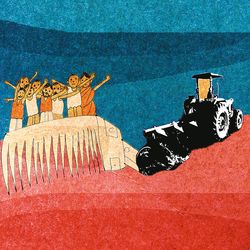 The enduring lesson to be learned is that if the protest is sufficiently prolonged and sustained, Modi bends at the knees. His “strong man” image is an illusion fostered by a string of successes at the polls. It was not Modi but Covid that closed down Shaheen Bagh. Now that normalcy is returning on the public health front, all the discontented in our society will inevitably discover that courageous and nonviolent persistence is the democratic way of resisting injustice. Satyagraha remains, 75 years after Independence, the most viable tool of securing justice.

One hopes for a resumption of judicial activism to ensure protection for the constitutional right of dissidents to disagree. In Jammu and Kashmir, the citizens—we must never forget that barring a handful of Pakistani infiltrators, there are only Indian citizens living there—should be guaranteed the rights and privileges to which all Indian citizens are entitled. This has been denied to them since that infamous day of August 5, 2019. The persistence of the Intifada spirit in Palestine, despite brutal Israeli repression, should be the lesson learned to prevent Jammu and Kashmir from falling into that condition.

The other cautionary tale to be noted is that in our democracy, state assembly elections are an excellent method of keeping in check the excesses of a too-powerful Union government. The first warning came from West Bengal. The second was the threat of the farmers’ agitation acquiring new momentum on November 26, the anniversary of the launch of the agitation. The third was the necessity of pacifying (appeasing?) infuriated opinion in Punjab, another state going to the polls early next year.

If Modi is discovering that the “light” he sought to “shine” has not dispersed the gathering darkness, it is not because any new wisdom has dawned on him but because elections in several states are around the corner. That is why it is essential to resist the Union government’s slogan of “one nation, one election”. That would only strengthen the authoritarian trends that are subverting our constitutional democracy.

Only time will tell whether Modi’s ploy will work, but it is already abundantly clear that it is not conviction or change of heart that is responsible for the announcement but sheer fright at what might happen at the hustings if he did not back off now.

And that explains why the farmers are not calling off their year-long agitation. They are looking for solid proof that Modi means what he says, and to push for the fulfilment of the rest of their agenda—principally the incorporation in the Constitution of minimum support prices for some 23 items of farm produce. Watch this space!