For a historian of some repute, Ramachandra Guha abandons academic restraint for vicious polemics when it comes to the Gandhis. He claims that his is not “a personal vendetta”, yet revels in recalling that immediately after Rahul Gandhi was finally persuaded to take office in the party, he divined that Rahul was a “well-intentioned dilettante”, “completely mediocre” and with “no original ideas”.

If this is the conclusion he had arrived at even before Rahul could prove himself or fall flat on his face, surely that shows that Guha started out totally prejudiced against Rahul (and the rest of the Gandhi family). And perhaps that is why he makes a mistake, unforgivable in a “distinguished historian”, of saying RG “lost in Raebareli, a family borough” when a little diligence would have shown him that RG actually lost in Amethi (while Sonia won in the “family borough”).

So, he goes on laying it with a trowel: the “common ideological thread uniting the political careers of Gandhi, Gandhi and Gandhi” is “their shared belief that they have a divine right to run the Congress (and India)” despite their “incompetence and nepotism”. The solution recommended is for Sonia “to retreat from politics and take her children with her”. Is this language reeking of objectivity and the national interest? Or, is it a “personal vendetta” for Guha not having been made director of the Nehru Memorial Museum and Library on which he had set his heart?

No, no, this is not “vendetta” at all, and “is not out of any issue with the Gandhis per se”, but out of Guha’s aching patriotic “concern for the country”. For he has no doubt that Narendra Modi-Amit Shah must be outed to save the soul of our nation. But first and foremost, must come the outing of the Gandhis. For “so long as the Gandhis are there, they are impeding other leaders within the party…. The path to political advancement is blocked by Rahul Gandhi.” Really? 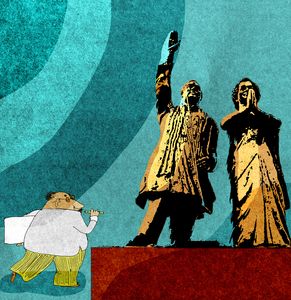 I seem to remember the little factoid that Rahul, having quit the presidency of the party of his own volition, and ruling out any Gandhi succeeding him, invited these “other leaders” to choose from among themselves whom they would like to see leading the party. And, it was only months after they failed to do so that Sonia stepped in—as an “interim president”. No “other leader”, not even anyone from the G-23 “dissenters” pressing for party elections, is prepared to put down his name for president. At the time of going to press, Rahul maintains he is not in the running. No other Gandhi has inquired, “Why not me?” Yet, says Guha, “Sonia Gandhi thinks that they are like the Mughals”. It would be nice to know which Mughal refused the throne and which Mughal said he would be only an “interim emperor” and which Mughal refrained from slaying his brothers to reach the ‘takht’?

Guha’s main point is that “the Gandhis not going anywhere” enables the “consolidation” and “perpetuation” of the present regime. So, will the Gandhis going result in Modi-Shah’s fall? Umm, no, says our historian, “removing the Gandhis will not lead to a revival of the Congress automatically” and “is not a one-stop solution”, but does not consider the possibility of their departure leading to the fragmentation and eventual ruin of the party. Removing the Gandhis from the top echelons of the party is easy enough, for Rahul, on behalf of his family, has offered to do so themselves. The problem is in replacing them, for there is no one who enjoys a tithe of the support they do—in the party and the country. So, we prefer to swim with them. Otherwise, we sink.