Insensitive diplomacy at its peak

The current stand-off between India and Nepal is over an isosceles triangle-shaped area covering a mere 32sqkm—its base line running eastwards from the town of Kalapani on the main Kali River to the Lipulekh Pass. At the apex of the triangle lies another pass, Limpiyadhura.

The India-Nepal border was demarcated not by any domestic Indian ruler but by the colonial East India Company which concluded its aggression on Nepal in 1815 with the Treaty of Sugauli. Under this treaty, the Company filched Kumaon and Garhwal from Nepal. Article 5 of the treaty compelled “the Rajah of Nepal” to “renounce for himself, his heirs, and successors, all claims to or connection with all countries lying to the west of the Kali River”. 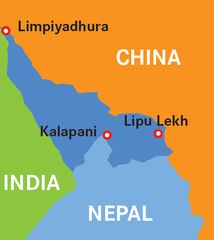 Since this was an Anglo-Nepal Treaty, its presiding deity was not Mother India but Mother Victoria; it should be dealt in such a way that Nepali sovereignty is respected even as India’s security interests are safeguarded. This is the way in which previous governments have dealt with this tiny wedge of territory since the 1950 Indo-Nepal Treaty of Peace and Friendship. Thus, 78 joint posts were created after China entered Tibet in 1951, and 18 Indian military posts, including Kalapani, were established after the India-China war of 1962. All except Kalapani were withdrawn by 1969 under an India-Nepal agreement.

Then, a 1997 India-China accord on pilgrimage to Lake Manasarovar stipulated the Lipulekh Pass as a principal entry point into Tibet. Nepal objected that it had not been consulted by either India or China, although the pass fell in Nepalese territory. There were huge demonstrations. The crisis was defused when prime minister I.K. Gujral accepted in 1998 that all boundary disputes with Nepal, including Kalapani, would be settled through bilateral talks. To this end, a joint technical-level working group was constituted and later, under A.B. Vajpayee, a Joint Boundary Commission.

However, in two decades, it has not proved possible to resolve the key issue of whether the headwaters of the Kali River lie in the rivulet called the Pankha Gad, that descends from the Lipulekh Pass and joins the main Kali River at Kalapani (as India contends), or the Kuti Yangti, that descends from the Limpiyadhura Pass and takes the name of Kali from Kalapani onwards (as Nepal contends).

In August 2019, External Affairs Minister S. Jaishankar visited Kathmandu, and it was agreed that a “joint mechanism” would be established at foreign secretary level to resolve matters. But the issue was aggravated by the publication of Narendra Modi’s “new map” of India in November 2019, which showed the disputed triangle in India, as our government has been dragging its feet about talks with Nepal. So, Nepal retaliated with a map of its own in January 2020 that showed the triangle in Nepal. When India still prevaricated, Nepal threatened to incorporate their “new map” in their constitution.

So, we thundered through our spokesman that Nepal’s new map, was “not based on historical facts and evidence”, and asked Nepal to “refrain from such cartographic aggression”. The chief of army staff was then unleashed. He began by claiming that he did not know “what exactly they were agitating about”. In the face of 22 years of intense disputation on this issue, he said: “There has never been a problem in the past.” Moving to his punch line, he claimed there were “reasons to believe that they might have raised these problems, issues at the behest of someone else”. Hint, hint, China!

Is this any way to conduct sensitive diplomatic relations with a small neighbour? Even if it is Covid time, why cannot the two foreign secretaries take to Skype or Zoom?