Breaking point? Not yet

Does JEXIT—the rather witty term for Jyotiraditya Scindia’s exit—really matter? The Scindia family were among the most avid loyalists of the British Raj and most of them—J’s grandmother and two aunts—have been with the BJP since its very founding.

In any case, the electorate of his constituency had defeated him last year, ending a long run of the family’s unbeaten record at the polls. Moreover, his influence had never extended beyond the Gwalior-Chambal area—which is why he had not been able to cobble together the majority in the Congress legislature party that would have got him the chief ministership of Madhya Pradesh. Indeed, beyond endeavouring to topple Chief Minister Kamal Nath by wooing away just about enough MLAs to give the BJP in the state assembly an edge, his departure changes few equations within the Congress; and, sadly for him, none within the party to which he has defected. He departs to join the long list of ex-Congressmen whose descent from Congress to obscurity was swift. 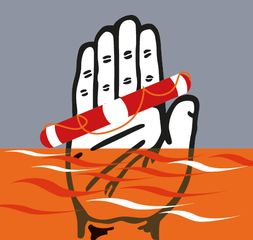 More to the point, however, is the question of whether JEXIT represents the incurable, irreversible, inexorable descent of the Indian National Congress to obscurity—a hundred years after Motilal Nehru became the Congress president and bequeathed a line of succession with virtually no parallel in modern world history.

There are those who would say that with the party having won only 44 seats in the Lok Sabha in 2014 and a mere 52 in 2019, the end is in any case nigh. So, is J being treacherous or prescient? Has he found that the Congress has tested positive for political coronavirus and, since it is 135 years old, is vulnerable to sudden choking death?

Almost anyone in the Congress will tell you—of course, after looking over his shoulder to see whether anyone is listening—that most of the evidence points to a party in terminal decline. There is a huge disconnect between the party and its workers, between the party and the people. It is not possible for the party to have gone from 414 seats in Rajiv Gandhi’s time to just about half of a hundred in his son’s without something gumming up the party’s works. Nor could the party’s slim majorities in many of the states it still rules(d) be so vulnerable to defection and downfall, if the high command’s hold over its satraps had not slipped so badly.

Yet, at 50 seats in the Lok Sabha, it is well ahead of any other party for the claim to be leader of the opposition. While there are many regional outfits that can, and have, outperformed both the BJP and the Congress, even on its worst day—today—there can be no conceivable challenge to the Congress as the only credible nationwide opponent of the BJP. All the seats in the Lok Sabha of the Dravida Munnetra Kazhagam, the Aam Aadmi Party, the Biju Janata Dal, Farooq Abdullah, H.D. Deve Gowda, K. Chandrashekar Rao, Y.S. Jagan Mohan Reddy, Akhilesh Yadav, Hemant Soren, Mamata Banerjee or even Sharad Pawar are from one single state. Mayawati and Asaduddin Owaisi can claim representation from more than one state but the total can be counted on the fingers of one’s hands. The two communist parties cannot even claim that.

The Congress can still attract the iron shavings of our myriad parties, to together translate their over 60 per cent majority in the country into a coalition government in 2024, to end this nightmare of saffron dominance.

That is why the many voices—Abhishek Singhvi, Shashi Tharoor, Manish Tewari, Sandeep Dikshit, Ashwani Kumar et al. (even mine)—being raised within the party need to be listened to, not only to save the Congress but, more importantly, to save the idea of India.