I was at the Afkar-e-Taza (innovative thinking) ThinkFest in Lahore, held on January 11 and 12. For me, the most rewarding session was on ‘The Future of Pakistan over the Next Decade’, a panel discussion between three senior parliamentarians, drawn from the three principal parties: the ruling Pakistan Tehreek-e-Insaf (PTI); the principal opposition party, the Pakistan Muslim League (Nawaz) (PML-N); and the veteran, once-dominant Pakistan Peoples Party (PPP).

The discussion was kicked off by Mustafa Nawaz Khokhar of the PPP. He chose to interpret the question before the house to mean what were the principal challenges the nation would have to face and overcome over the next ten years. The others followed suit. Khokhar said the three principal challenges were those over which Pakistan, as a nation, had little control but would have to hurdle the consequences: one, climate change; two, the possibly horrendous consequences of the US-Iran confrontation in the immediate neighbourhood of Pakistan; and, third, the fallout on the Pakistan economy of the trade war between the US and China. 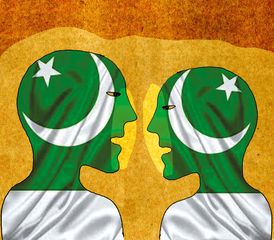 He was followed by Fawad Chaudhry of Imran Khan’s PTI; he is also the federal minister of science and technology. He identified Pakistan’s single biggest challenge as “religious bigotry” and “terrorism”. Unless these were wiped out, and that too in the immediate future, Pakistan could not hope to progress because, he emphasised, no country anywhere that had sunk into religious fundamentalism had ever progressed. The 400-strong audience, largely composed of youth and students, applauded. As the only Indian present, I could not but sit up and take note, wishing only that someone from our saffron gang was listening in. The minister then went on to say that the two principal requirements for progress were “akal (brain)” and “ilm (education)”. He rued that Pakistan had let down the largest segment of its population, the youth, by failing to provide them with first-rate, modern, scientific education that would enable the nation’s abundant brainpower to shoot Pakistan to the upper echelons of artificial intelligence and information technology, now in its 5G phase. To this end, he announced, his government was establishing the second biggest bio-technology park in south Asia. But, he added, this was not enough. Unless Pakistan secured social justice for all sections of its population, especially by ensuring the “protection” of its minorities, the nation could not go forward.

The PML-N leader, senator Musadik Malik, took this up and said it was not enough for the minorities to be assured of their “protection”; they must be guaranteed their constitutional rights. Invoking Jinnah’s inaugural address to the Constituent assembly of August 11, 1947, in which the Quaid-e-Azam stressed the secular nature of the about-to-be-born Pakistan wherein Hindus, Sikhs, Christians and Parsis would be free to go to their places of worship and all would be treated equally as citizens, irrespective of their faith, as also another speech by a non-Muslim tribal leader of East Pakistan on the occasion of the adoption of Pakistan’s first constitution in 1956, the senator stressed that without assuring the human and civic rights of the minorities, Pakistan would be unable to fulfil the fundamental requirement of democracy: human and civic rights for all. He sought harmony through dialogue between the institutions of democracy—judiciary, legislatures and executive—in place of the raging tensions and the narrow pursuit of institutional, not national, interest, which characterises Pakistan now.

Astonishingly, not a word about India. India and the security threat it allegedly poses were not even mentioned, not even in passing. That bears afkar-e-taza on our part, don’t you think?