Mahanayak’ Narendra Modi has succeeded spectacularly where Muhammad Ali Jinnah failed so miserably in driving droves of Kashmiris into Pakistan’s arms. For, after spending two months in Kashmir in the summer of 1944, when Jinnah departed claiming that the Kashmiris wanted to follow the Muslim Conference rather than the National Conference, Sheikh Abdullah retaliated by proclaiming his Naya Kashmir programme. The programme was drafted by a group of Jammu & Kashmir’s leading intellectuals drawn from virtually all the numerous ethnic, linguistic and religious communities that comprised the composite civilisational heritage of the Riyasat (princely state). It hotly rejected the narrow theological construct of nationhood that underlay the conception of Pakistan and sought instead a secular future in India for all the diverse peoples of the state.

The Sheikh could not see his multi-faith followers in a monolithic Muslim Pakistan; he could, however, see the Riyasat’s many faiths accommodated in a plural India, a secular India. Hindutva rule has changed that choice to one between a Muslim Pakistan and a Hindu India. Never was the choice made starker than on August 5. No wonder there is now a palpable drift towards Pakistan. 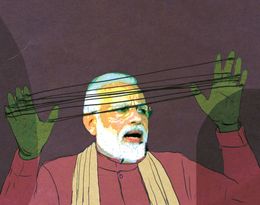 That was certainly in evidence when Imran Khan spoke at the United Nations General Assembly on September 27. Thousands of Kashmiris, from either side of the Line of Control gathered at the square outside the UN building under the banner ‘Stand with Kashmir’. They were joined by a large numbers of Pakistanis and by a motley crowd of others. Demonstrations are par for the course at UN General Assembly sessions, but these numbers— estimates ranging from 5,000 to 16,000—were unprecedented. There was a counter-demonstration by Modi bhakts, but they numbered no more than a few hundred and packed up in a couple of hours. On the other side of the barricade, the ‘Stand with Kashmir’ demonstrators remained in full voice till Imran Khan spoke in the afternoon, a speech heard and retransmitted on WhatsApp, to wild applause and repeated cheering.

For those Indians like me who believe we must win the hearts and minds of the Kashmiris and not just their land, it was even more distressing to learn, particularly from the report filed to The Telegraph of Kolkata by their correspondent in Srinagar, that Imran’s speech also received a thunderous response in the valley, with large gatherings and fireworks lighting up the night sky in defiance of the blackout and clampdown imposed by Home Minister Amit Shah and National Security Adviser Ajit Doval. Never before has any Pakistani intervention in the UN—neither those by Sir Muhammad Zafrulla Khan nor Zulfiqar Ali Bhutto nor any other military or civil leader of Pakistan—been feted by Kashmiris in this manner.

These were the Kashmiris who foiled Operation Gibraltar in August 1965 by capturing and handing over to the authorities every single Pakistani infiltrator, spy and saboteur. That is when we had the voluntary loyalty of the Kashmiri, the biggest prize of our secularism and the biggest blow to Pakistani bigotry. Now, what no Pakistani leader could ever achieve— wresting from us the fidelity of the Kashmiri—has been gifted to Pakistan by Modi and his men. Article 370 was the one hope that Kashmir had of being constitutionally empowered to negotiate a special relationship within the Indian Union on the basis of prime minister P.V. Narasimha Rao’s pledge of “the sky” as the “limit” for Kashmiri autonomy. It brought Jammu & Kashmir back from insurgency to democracy. That one hope has now been extinguished. “Cry, my beloved country”.