Why is the prime minister—yes, indeed, he of the 56 inch chest and the “surgical strikes”—so cowed down by the US President Donald Trump’s threat to impose sanctions on India, if it continues to import crude oil from Iran? Who is Trump to determine from where and on what terms India is to import oil? Who is he to aggravate our fiscal and current account deficits, and fuel inflation, especially in petroleum products that affect the livelihood of every Indian?

India imports about 12 per cent of its crude oil from Iran—some 23 to 24 million tonnes in 2018-2019. Not only is Iranian official pricing of crude the lowest of all oil majors, it is also paid for in Indian rupees, not US dollars. Geographically, Iran is the closest oil supplier to India. So, transport costs are also the lowest. Moreover, Iranian oil comes free on board, so we are able to make our own arrangements at the most economical cost to transport Iranian oil to Indian ports. Also, insurance is free. Plus, we get 60 days credit (double what other suppliers provide) and have been negotiating with Iran to raise this to 90. Hence, our sovereign decision to source a little over a tenth of our imports of crude oil from Iran. 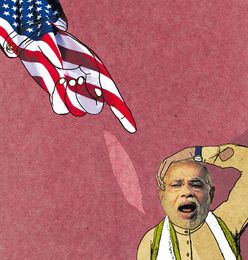 Of course, the quantity now being denied to us can be more than made up by sourcing our requirements from elsewhere, but surely this should be decided by India, not imposed on us by a foreign power. The foreign power that is now threatening us is the state that has unilaterally withdrawn from a multilateral nuclear agreement with Iran. The European parties to the agreement have not followed suit. The agreement still stands. And, the sanctions have been imposed on Iran by the US without the authority of the United Nations.

The fact is that the US lacks the guts to take its grievances against Iran to the United Nations. They know that in that forum of global democracy it will be isolated and shown up for what it is—a bully who cares not a fig for international law and the comity of nations. Let alone the UN General Assembly, it will not find even a single supporter in the UN Security Council. Only weeks ago, External Affairs Minister Sushma Swaraj had assured the nation that her government would comply only with UN-sanctioned prohibitions. And, yet, however harmful to vital Indian interests such unilateralism is causing, this government that claims to be “nationalist” and “India first” just keeps its mouth tightly shut.

Two other major importers of Iranian crude, China and Turkey, have, in contrast, spoken up. The Chinese official spokesman, Geng Shuang, has urged the US “to seriously respect China’s interest and concerns”. Could the Modi government not have said the same? Indeed, if this had been Nehru’s India, Turkey would not have been the first to ask, as Turkey’s foreign minister, Mevlut Cavusoglu, has: “Why are you putting pressure on other countries? Take your own measures. Why do other countries have to obey your unilateral decisions?”

In the heyday of Nonalignment, that is the language that Indian prime ministers from Jawaharlal Nehru to Indira Gandhi to Rajiv Gandhi used to bring to heel “the arrogance of power”. Now, under Modi, we cringe and cave in.

As my fellow columnist, former ambassador M.K. Bhadrakumar, has remarked, “Trump apparently thinks Modi is a man of straw, prostrating before the superior power and kicking the lowly underdog”. Come May 23, this nation must rid itself of such cowardice.