Sogam is an obscure village in the remote Lolab Valley of Kupwara district in north Kashmir. It had a brief brush with history when the threat of a rocket attack prevented defence minister George Fernandes’s helicopter from landing there. It then went back to quiet isolation, until a young man, Shah Faesal, burst into national prominence by standing first in the 2009 civil services exam—the first Kashmiri ever to do so. Faesal himself described the achievement as “a punch on all those stereotypical notions that Kashmir can only produce terrorists”.

He came from a family of teachers—his father, mother and grandfather all being scholars in a bewildering profusion of languages: Persian, Arabic, English, Urdu and Kashmiri. At the instance of his father, he immersed himself in Shakespeare, Wordsworth and Thomas Hardy, but was most influenced by Mark Twain and Oscar Wilde in English, Allama Iqbal in Urdu and Rumi in Persian. He also read widely in world history taking in Arnold Toynbee and Will Durant. Above all, it was Jawaharlal Nehru’s Glimpses of World History and The Discovery of India that shaped his value system and worldview. He is also a staunch believer in Gandhian non-violence. 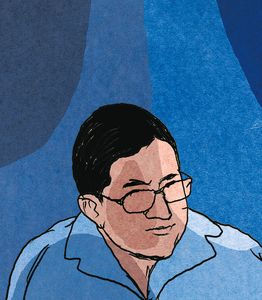 He had actually trained to be a doctor. Then why the switch from medicine to administration? Because, “being a technocrat you can only talk about things, but being a bureaucrat you can actually change things.” It was a sad illusion that many of us in the civil services had shared at the start of our careers. As a bureaucrat, you are an integral part of the system you had hoped to change. Faesal found himself as assistant commissioner, Pulwama (the very site of last week’s terror attack), jailing people with just grievances and unfairly imposing counter-productive curfews. As the district election officer, Bandipura, he had seen democracy being subverted. Yet, as an IAS officer, he could do precious little. Afzal Guru’s hanging (to satisfy the “collective conscience of society”) proved the “turning point”. “By hanging one alleged terrorist, the Union government sparked an entire terrorist movement,” he says.

During a year’s sabbatical in 2018, reading for a Master’s at the Kennedy School of Governance, Harvard, on a Fulbright scholarship, he decided to take the plunge into politics, even if it attracted the charge that he was “a career chameleon”. He returned to India in January and put in his papers.

But, which party to join? The National Conference was the “easy way”, but public outrage at the prospect and protesting mobs outside his home deterred him. Not the Congress either, because no Congressman can talk freely about the situation in the valley. “Obviously not” the PDP, because it comes with “a lot of baggage”. Nor the Hurriyat, because “I believe in electoral politics, in democracy.” And, of course, no truck with the BJP. Then what? Take the plunge on his own. He already has thousands of followers and a rudimentary organisation in 57 of 85 assembly constituencies in the state. He demurs when I suggest that he is trying to do an Arvind Kejriwal in his state, but the parallel is obvious.

He describes Kashmir as “a high altitude graveyard” in which “there is a Karbala every day”. Yet, “nothing seems to be pricking the conscience of these powers who can stop this kind of bloodshed.” His objective is to end the “culture of violence” in the riyasat (state), and go back to the period 2002-2007 when A.B. Vajpayee and Manmohan Singh brought a ray of hope to the valley.

Are we seeing Kashmir’s 21st century man of destiny?