Eight seats for BJP in UP

The outcome of the current round of state assembly elections clearly points to the Narendra Modi dispensation ending before the next summer solstice in the bin of the bhule bisre—the forgotten and abandoned—to which Modi had consigned me on the floor of the House as my term in the Rajya Sabha drew to a close in March 2016. Revenge is sweet. For wherever on Tumultuous Tuesday, December 11, the BJP was thrammed, Modi will obviously be wiped out, and even where the BJP won, their margin has been so dramatically reduced as to render Modi’s alleged “magic” quite as illusory as the Rs15 lakh he promised for every bank account.

The writing appeared on the wall soon after his lunatic move on demonetisation. I refer to the assembly polls in Uttar Pradesh in the spring of 2017. Apparently, the outcome in terms of seats was a massive endorsement for Modi’s “magic”. In fact, a closer look at the vote shares confirmed that it was only the divide between Akhilesh and Mayawati that had enabled Modi to turn disaster into triumph. Between them, Mayawati and the coalition led by Akhilesh garnered 52.2 per cent of the vote as against the BJP’s 39.7 per cent. Yet, because they were not united, the opposition gifted 312 seats to the BJP and secured a mere 74 for themselves, collectively. 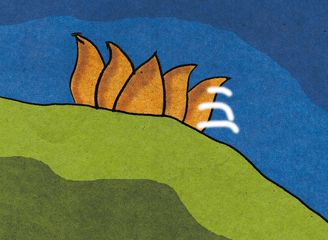 Once they got together, as they soon did, Modi’s end was in the offing. Nothing more clearly established this than the massive wins the Akhilesh-Mayawati duo scored in parliamentary by-elections both in Yogi Adityanath’s home turf of Gorakhpur and his deputy chief minister’s seat of Phulpur earlier this year. This was followed a few months later by the decisive victory of the third element of the trio, Ajit Singh’s RLD, in Kairana over the daughter of the late Hukum Singh of the BJP, who had coasted to an easy win in 2014.

The axis on which opposition prospects turn lies in Lucknow. Whatever Mayawati’s differences with the Congress in states like Madhya Pradesh and Chhattisgarh, if the alliance that won Kairana holds till the Lok Sabha polls, I predict, based of information imparted to me by a close friend who runs a successful survey company, that Modi’s share of 71 out of 80 UP seats in 2014 will be slashed to just eight. Yes, you read that right; just eight. That seems more than likely.

Further, the continuing relevance of the Congress in states characterised by the Congress-BJP binary was reconfirmed when the parliamentary by-polls in Alwar and Ajmer in February 2018 completely reversed the Congress defeat in 2014.

Consider also that even in seats where the BJP has managed a sneak win in the latest round of assembly elections, their vote share has collapsed compared with 2014. That, in addition to the earlier parliamentary by-polls in Rajasthan, is tolling the bell for the BJP come the 2019 general elections.

My mind goes back to March 2017. The Shah-Modi bulldozer was rolling over UP while I was incarcerated in a daylong TV session, in which the anchor seemed more excited than his saffron guests at seeing the BJP streak ahead. It was then that I stressed that the defeat would galvanise the disparate opposition to unite and block a second term for Modi in 2019. The anchor, Bhupendra Chaubey, sneered. I am delighted to sneer back at him now as the saffron bullet train derails.