What “feminisation of men” trend is all about

For most women, having a child is economic equivalent of being hit by a meteorite

The millennia old spectacle of alpha males beating their chests continues. Swaggering out of jungles, these macho men now roar on social media and strut in unlikely places, from cyberspace to the crypts that hold cryptocurrencies. Strongmen dominate countries and companies. Some equate Elon Musk’s Twitter-grab with Vladimir Putin’s hostile takeover bid of eastern Ukraine.

But there is also a trend of rising yin in men, a phenomenon called the “feminisation of men”, noticeable in the west and in countries like Japan and Korea. Scandinavia was once fabled for fearsome, one-eyed, red-bearded, sword-wielding, plundering and pillaging swarthy Vikings. Now it is common to see men being stay-at-home dads, gaggles of hubbies taking their babies in prams for park walks, working as caregivers or tutors in kindergartens. Advanced Scandinavia has robust policies like papa leave and a cultural milieu that promotes gender equality. But new research highlights the unintended consequences of setting right historical wrongs. In Of Boys and Men, scholar Richard V. Reeves explores the pressures faced by males in schoolyards and workplaces, academically outcompeted and losing blue collar jobs to women. 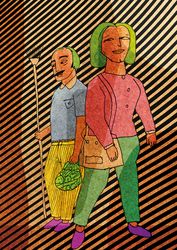 Problems arise from success—girls outperform boys in school. Finland’s educational system is internationally renowned because schoolchildren score high in reading, writing, math and science. Finnish girls drive that ranking. They outrank the boys among the topscorers, by far. When wealthy donors paid for college tuition in Michigan, the number of women—especially African Americans—graduating from college jumped by 45 per cent, increasing the pool of graduates. But the intervention did not improve the boys’ performance.

This has personal and political consequences. Evidently, dispossessed male voters are among the backers of Brexit, Donald Trump and other nationalists, populists and social conservatives. Progressives may find these issues unfashionable, but researchers say if they are ignored, men will be lured by the false promises of ultraconservatives to squash women’s rights and restore “lost glory” to men and nation. Female-dominated classes are as much a harbinger of crises as male-dominated classes were.

Both men and women are victims of their biology. Reeves notes “for most women, having a child is the economic equivalent of being hit by a meteorite”. But the root cause of men’s advantages and disadvantages is also physical. Men lag because social and technological revolutions have removed many barriers faced by women, enabling them to compete on a more level-playing field. Earlier, testosterone was an economically invaluable hormone when well-paid work involved physical labour. In the 21st century, multi-tasking, risk management and resilience are important.

In her book The End of Men, American writer Hanna Rosin asserted a decade ago that men “will learn to expand the range of options of what it means to be a man”. Now she rejects her earlier “optimism,” “smugness” and “tragic naïveté.” Those options failed to materialise. But a solution is observable in Scandinavia. More and more men are doing what was once dismissed as “ladies labour”—whether as stay-at-home parent or employed in social care. Reeves suggests one way to solve the problem is to give recognition, better pay and social respect for “women’s work”—something that was denied to women.