For Russia, rise of a strong state has been a historical necessity

There is an old Russian saying: The future is certain; it is the past that is unpredictable. Successive autocrats have rewritten or airbrushed the past to borrow grandeur—and legitimacy. Vladimir Putin has deep-dived into Russia’s 1,000-year-old history to justify his vision of greatness, authority and religious consecration. In The Story of Russia, renowned British author-historian Orlando Figes asks: “How does the story of Russia end? How will the country’s future be shaped by its past?”

Figes answers this intriguing question by examining the geography of the world’s largest country, its centuries-old systems of rule, religious structures, social norms and myths. Putin evoked mythology in 2016 by erecting near the Kremlin, the statue of the 10th-century ruler-saint, Vladimir the Great. He was resurrecting “Ruskii mir” (Russian world), an ideology rooted in the past when Russians, Ukrainians and Belarusians were one nation. “Putin’s obsession with Russia’s imperial past runs deep,” says American foreign affairs expert Fiona Hill. “He wants Russia to be the one exception to the inexorable rise and fall of imperial states.” 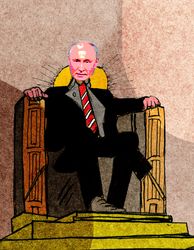 Now, Putin’s imperial vision lies in ruins. So too his repeated attempts to build bridges with the west. Figes believes Russia’s isolation is mainly due to the west’s lack of understanding and goodwill. “Russia wanted to be part of Europe, to be treated with respect,” he says, adding that western leaders spurned and took advantage of Russia’s weakness to diminish it. An opportunity to end a historical cycle of antagonisms was missed.

To predict Russia’s future, Figes studies the historical evolution of a Russian paradox—strong state and a weak civil society. The Mongols established strong statehood. Peter the Great’s 17-18th century reforms entrenched the military and the bureaucracy but eroded civil society’s development. For Russia, the rise of a strong state has been a historical necessity. When central governance weakened, foreign invaders attacked and captured territory—the Mongols, Napoleon and Hitler. Lost territories were regained when central authority became powerful. Patriotism is another hallmark of the Russian psyche. Stalin’s totalitarian regime was formidable, but people lived in fear and want.

Yet, he succeeded in consolidating public patriotism, an invaluable tool, especially in times of crises.

From Tsars and Khans, Byzantine emperors and Soviet dictators, arose the mythology of the personality cult of a strong leader who worked tirelessly for the glory, unity and protection of the nation. This resulted in the ruling apparatus becoming the sole centre of power—the all-important state juxtaposed with an impotent society. Says Figes, “This powerful tradition seems to condemn Russia to an eternal return of the past.”

For all the peasant rebellions, revolutions or occasional reforms, power has reconsolidated. From the collapse of the tsarist empire arose the USSR. From the collapse of the Soviet Union arose Putin’s Russia. Following the collapse of an authoritarian state, democratic forces were too weak and disorganised to strike roots. Chaos, shame and humiliation followed, only to give birth to a new autocratic state. Post-Putin, this phenomenon is likely to repeat. Explains Figes, “Fundamentally little has changed in the systemic asymmetry in the relationship between autocratic rule and society.”

The past is unpredictable. It is also a burden.