The US today is an anocracy

American historian Jared Diamond theorised that “guns, germs and steel” determine the fate of human societies. Today, the 3G—“guns, god and grievance” are poised to determine the fate of the United States, and whether it will even remain united. Two-thirds of Americans oppose the Republican-dominated Supreme Court rulings upholding gun ownership and repealing abortion rights. The “3G world” is not only outdated, but ominous. Historian and author of How Civil Wars Start, Barbara F. Walter says, “An institutional meltdown is distressingly plausible. One need not be a pessimist to worry about the coming years in the US.”

The loss of independence and fairness in institutions is a barometer of erosion of democracy in a country. Walter notes the US is an “anocracy,” in the twilight phase susceptible to civil wars. Anocracy is when a country transitions from democracy to autocracy or vice versa. Democracies slide into anocracy when governance weakens, and grievances are not remedied. Autocracies unravel when the power to repress fails. 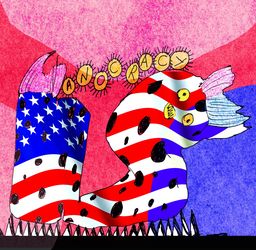 The US Supreme Court—an American’s last resort—is partisan. It leans towards Christian fundamentalism on the ongoing culture wars over gay rights, black affirmative action, feminism, integration in schools and poverty relief. And the 50-50 split gridlocks the US Congress because filibustering rules require 60 per cent majority to enact laws.

Several leading American historians agree that the signs of a civil war are flashing red. The rise of factions and force multipliers are two powerful signs. The US is cleaved politically into the urban, multi-ethnic Democrats and the white, rural Republican factions, just as the Catholics and Protestants or Muslims and Christians were in Europe in the past. Walter blames the Republican Party for its “predatory factionalism”, relegating ideology to favour race, religion, ethnicity and identity to harvest votes—“caring for the group, not for the good of the nation.”

From the earlier word of mouth, printing presses, toxic television shows, the force multiplier now is social media. It unites extremists and divide societies. Culture warriors are usually the “sons of the soil” who resent immigrants and the impacts of foreign influences—religion, technology or globalisation. Experiencing a “status reversal,” the locals feel “downgraded” in their own land. God and gun offer solace for grievances. America has more guns than people—400 million to 330 million. Grievance grows and grinds in societies, sometimes for decades. Then along comes a populist rabble-rouser who lights the match.

As historian Jessie Childs observes in her book A New History of the English Civil War, “polarisation and propaganda have always dehumanised the “other”, pushed disagreement into bloodshed and fake news and hate speech have culminated in atrocities.” The American liberal establishment fully grasps the threat, the biggest since the nation’s 1861 civil war. Two New York Times reporters quote President Joe Biden telling a senior Democrat, “I certainly hope my presidency works out. If it doesn’t, I’m not sure we’re going to have a country.”

Research shows that politics is more important than economics in starting or preventing civil wars. More than a third of Republicans and Democrats today believe secession and violence are justified to achieve their political ends, a 200 per cent increase in five years. Right-wing militias have exploded, outnumbering and outgunning left wing insurgents. White supremacy infiltrates US law enforcement agencies. Through history, armed conflict stifles empathy and hardens hearts. As Thomas Fuller, a 17th century English clergyman, wrote, “War makes a land more wicked.” The solution to avert tragedy is as simple as it is hard. Think America’s good first.