The mills of Brexit grind slowly, but they grind small. Reality is crushing the grandiose ambitions of “Global Britain”, slowly but surely. When people mortgage their house, you know their house is not in order. Fire sales of Britain’s crown jewels, its magnificent real estate acquired during its glorious empire days, tell a sad story of a financially squeezed nation, shrinking not surging.

The 150-year-old British embassy set in sprawling grounds in Tokyo is second in grandeur only to Imperial Palace across the winding river. Now half its grounds have been sold to the Mitsubishi Corporation. “This is a huge mistake,” admits foreign secretary Liz Truss. Britain also sold the majestic, century-old embassy located in a 10-acre sanctuary in Bangkok’s heart. Employees now work in a concrete tower. Disgruntled British officials say this downscaling is like going from a Prada showroom to a discount store. 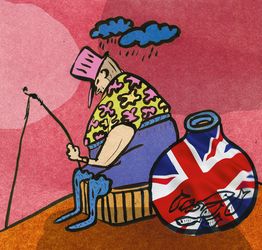 For most foreigners, the first contact with Britain is its impressive embassies, projecting the nation’s power and prestige. Now heirlooms are being sold to buy solar panels and maintain property. Loss of grandeur is like bankruptcy—“It happens gradually, then suddenly.” Britain’s financial crunch was a train wreck in slow motion but accelerated after Brexit and the pandemic. It damages post-Brexit vision of “Global Britain”—enhancing “Britain’s influence abroad and prosperity at home”.

At home, Brexit has brought more disruption than prosperity. The disappearance of European truck drivers and workers to harvest fruits and vegetables have caused shortages. The gaps in supermarket shelves symbolise the gaps between Brexit ambition and reality. International projection shrivels in the face of cost-cutting measures like merging ministries and slashing foreign aid. The British Council is cutting jobs and infrastructure in 20 countries. The backbone of the British Empire was its civil service. Now, 90,000 civil servants are to be sacked. Who will run Global Britain? Algorithms?

Britain’s notion of special relationship with the United States is a nostalgic illusion. The US ignored Britain in the Afghanistan pullout and warned it against reneging the Northern Ireland agreement with the European Union. Asks Carnegie Europe’s Peter Kellner, “Now that Washington has turned its back on London, and London has turned its back on Brussels: what should be Britain’s place in the world?”

British historian and author Ian Morris explains: “Britain enjoyed outsized power during colonialism, which made its post-war decline all the harder to accept.” To understand the Brexit decision, scholars go back to the 2016 referendum campaign, to Britain’s 1973 accession to European Communities, to World War II, to the arrival of the Romans 2,000 years ago. Morris goes back 10,000 years.

Among other factors, he attributes Brexit to the “psychology” of maps. The 800-year-old Hereford Map virtually conjoins Britain to Europe, hanging on precariously at the edge of the world. Subsequent explorations disproved this geography. In 1902, Halford Mackinder’s map placed Britain at the centre of the world, radiating European maritime power. Morris writes, “But this represented only three per cent of the island’s history in which it took centre stage. Rest of the time it was merely Europe’s poor cousin.“

Still, despite the sun setting on the empire, Britain was a global force, in big ways and small. A decade ago, piracy endangered shipping in the Indian Ocean. It was quelled by Operation Atalanta, an international military force headquartered in Britain and coordinated with African countries. But the successful Operation Atalanta was established by the European Union. After Britain’s divorce, the operational base shifted to Spain. Brexit grinds slowly, but it grinds small.