It is hard to understand Putin’s calculus. But he is fighting his war, his way

What will Russian President Vladimir Putin do next? Even the Americans who predicted the Ukrainian war, know not. Will he escalate or de-escalate, will he turn to Ukraine’s east or spread all over, will he secure supply routes or will he bomb cities? Global leaders and analysts agree: “Only Putin knows.”

Confucius says: To predict what a person does next, study his past. Putin’s self-proclaimed mantra is, “If you are going to get into a fight, then you punch first.” That explains his first move in Ukraine, while claiming that he will not invade. His past shows he punches hard—Chechnya, Syria, and now Ukrainian neighbourhoods, reduced to rubble. 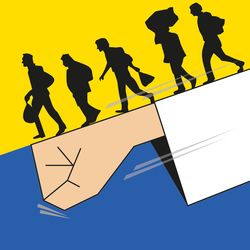 Putin took up boxing, but then switched to martial arts. He said, “Judo is philosophy, not sport.” Judo uses the enemy’s strength against him, identifies the foe’s weakness and then penetrates the chinks. In Europe’s armour, the chink is its borders. A Putin “invasion” that has received less attention is his deployment of “weapons of mass migration.” Monika Sie, director of Dutch thinktank, Clingendael Institute, says, “Putin weaponises refugees to destabilise Europe.”

Apart from war refugees escaping into Europe, there is the “orchestrated” migration of asylum-seekers to pressure the EU. Last winter, Putin ally, Belarus President Aleksander Lukashenko stockpiled asylum-seekers on his border with Poland and the Baltic states, which then amassed troops to block entry. The EU and even NATO now define mass migration as a “security threat”. Europe’s refugee crises can worsen as the aftershocks of the Ukraine war lead to food shortages. Hunger, violence, inflation and climate change can aggravate mass migrations, especially from Africa, in summer when the perilous sea crossings resume.

An important judo concept is “maximum efficiency with minimum effort”. This principle explains Russia’s cyberattacks, but not its war in Ukraine, where it seems to be “maximum force with minimum conquest”. It is hard to understand Putin’s calculus. But he is fighting his war, his way. Given Ukrainian resistance, it is doubtful he can hold territory as western analysts claim. That is a quagmire he avoided in Syria.

Putin is a Cold War warrior fighting a 20th century war. But his hybrid and cyberwarfare reveal his 21st century mindset. Is the destruction aimed to force submission? Perhaps one must dig into his KGB past in East Germany on the eve of Soviet Union’s collapse. Screaming protesters besieged the KGB’s Dresden headquarters. Putin scrambled to save classified documents. Frantic calls to “mother ship” went unanswered. Subsequently, Putin famously recalled, “Moscow was silent.”

So, Putin spoke up. He went out to the protesters and declared, “There is a tank behind, and I am here to tell you if you don’t disperse there will be an order to shoot.” Protesters dispersed. His show of force was a bluff. There was no tank and no one to give that order. He learnt two lessons: Threats work, but if your bluff is called, you must have and use firepower. Is his nuclear threat a bluff? Only Putin knows.