History was made. This country got its first woman prime minister. That is ho-hum news everywhere, except if it had happened in the US, Russia or China. Sri Lanka elected the world’s first woman PM in 1960, then came Indira Gandhi, Golda Meir, Benazir Bhutto, Khaleda Zia, Sheikh Hasina….

But it is shocking that progressive Sweden has never had a woman prime minister until now. Even more shocking is that history was unmade in seven hours. Sweden’s first woman PM, centre-left social democrat Magdalena Andersson, was forced to resign on the day she was appointed. “This political circus is very bad for Sweden,” declared Ulf Kristersson, leader of her ally, the Moderates. “People are wondering what the hell is happening in Swedish politics right now,” said Ebba Busch, leader of the centre-right Christian Democrats. 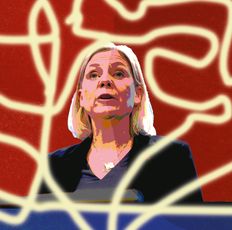 The mess comes from Sweden’s complex governing system. Andersson did not win a parliamentary majority for her appointment. But the opposition lacked the votes to stop her from taking office. Then, parliament rejected her budget, but adopted the opposition’s, drafted by the anti-immigration Sweden Democrats. History was made—for the first time, a far-right budget was passed in Sweden. Infuriated by the opposition budget’s reversal of environmental measures, the Greens pulled out of Andersson’s governing coalition, toppling her government.

So, while the world danced to ABBA, watched Ingmar Bergman movies and enjoyed Björn Borg’s tennis skills, whatever happened to women politicians in Sweden? This liberal Scandinavian country introduced women’s voting rights a century ago, is path-breakingly advanced with social welfare and gender equality. Yet, neighbouring Norway had its first woman PM in 1981. Denmark, Iceland and Finland followed.

Tragedy, scandal and prejudice have stymied prime ministerial ambitions of Swedish women. The first serious contender Anna Lindh was knifed to death. Mona Sahlin’s bid to become PM was derailed by the “Toblerone Affair”. She had used her government credit card to buy $4 lakh worth of private goods, including nappies and Toblerone chocolate. “These are all things that male politicians have wives to do,” said political scientist Drude Dahlerup.

Unconscious bias works against women. Södertörn University’s political expert Jenny Madestam says previous women PM contenders “battled the unconscious beliefs that the party leader should be a man”. Top women political leaders have also paid the price for being ahead of their time, advocating talks with the Greens or the far right. Madestam believes it is easier for men to make these strategic leaps. Instead of becoming PMs, prominent female Swedish politicians chose international careers in the UN or the EU.

There are unconscious expectations from men and women politicians, in substance and in style. In her 2018 biography, Inifrån, conservative PM contender Anna Kinberg Batra writes, “When a woman scores points against her opponents, stands up for herself or is challenging, she’s neither strong nor sexy, but ‘sharp’, or even ‘a bitch’.” It’s perfectly normal for a man to look grave when discussing serious issues, but when she handled serious matters, top colleagues advised her to “look more cheerful”.

Andersson now has reasons to look cheerful. History was made yet again on November 29 when she was reappointed first woman PM—for the second time. But the fragmented political landscape makes her position precarious. Parties are jockeying for next year’s parliamentary elections. Her party drones on about rent control, while the far-right rants against crime, shootings, bombings and gang violence in immigrant ghettos that blight big cities. This resonates powerfully with the voters.

All the problems that made Andersson’s first stint as PM a “seven-hour wonder” remain.