Anita Pratap: Trees are social creatures that come to each other’s aid in times of danger

This is a true story. My uncle, a surgeon, loved trees and every day he communed with them in his garden in Kottayam in Kerala, examining them from root flare to crown.

His favourite was the luxuriant Malgoa tree that bore hundreds of sweet, juicy mangoes. Uncle would distribute them to family, friends and everybody in the hospital where he worked. He died in 1998. That year, for the first time, the tree did not bear fruit. Nor the year after. Eventually it restarted, but it was never the same. Gone was the joyful abundance. The tree was grieving.

As someone who loved my uncle and trees, I found it perfectly normal that trees had feelings. Experiments that showed plants scream when cut indicated this, but that trees could behave like pets was considered absurd. This is why science is exciting, but can sometimes be a double-edged sword. Your thoughts are dismissed until proven right… sometimes. Ecologist Suzanne Simard, who grew up in the Canadian forests, has done pathbreaking research that proves trees communicate. She discovered that forests are like the neural networks in the brain or a living internet. Instead of computers linked by wires and radio waves, the trees are connected by threadlike fungi, which also help them extract water and nutrients from the soil. There are several satellites, with the oldest trees functioning as the biggest communication hubs. Scientists call this vast underground network, the “Wood Wide Web”. 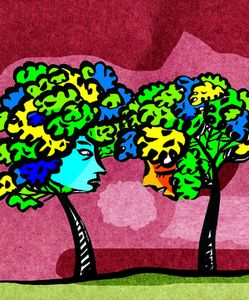 Trees work together in good times and bad. Like a well-knit human community, trees are social creatures that come to each other’s aid in times of danger like drought, disease or pests. Simard found trees infected by insects send chemical signals to nearby trees which produce defence enzymes against the insect. Trees communicate needs and cooperate to send supplies. It is the opposite of the Darwinian principle of the selfish gene asserting itself to survive. Instead of the strongest tree grabbing the dwindling nutrients, they share, sending it on to the neediest. Much like the Japanese villagers, who, after the devastating 2011 tsunami, forwarded precious supplies to the people on the frontlines who needed them more.

Forests, like humans, are an ancient, caring, complex society. That’s how and why they survive. Cut them down, especially near human habitations, and diseases like Covid-19 spread. Scientists have discovered that the secret of healthy trees is diversity.

Natural forests that survive millions of years are a profusion of biodiversity, with different species of trees, bushes and moss. Trees sicken when stuck in monoculture plantations. Fertilisers and pesticides become their life-support. Commissioned by the British government, The Dasgupta Review (an independent review led by eminent researcher Sir Partha Dasgupta) explores the catastrophically non-existent relationship between biodiversity and economics, which has “enabled the destruction of natural resources on a monumental scale”.

Estimates suggest 1.6 earths are required to maintain the world’s current living standards. Simard has proved that trees talk to each other. Whether trees can talk to humans remains unproven, though there are people who experience profound communication, calming and age-old wisdom from the whispering boughs of ancient trees. That might be considered a sign of insanity now, but then science is a work in progress. It may catch up. Like societies, Simard says, healthy forests are “built on relationships. The stronger those are, the more resilient the system.” The bond between nature and humans is the magic key. Trees and forests are as important to our well-being as uncles and societies. This is a message Covid-19 has reinforced around the world.