In black dystopia, people need protection from the police and the police need protection from the people. The dystopian capital is “Murderapolis”, also known as Minneapolis in the US. In this scary world, routine activities—like going to a shop or a gas station—can turn lethal. Says author Van Jones, “For blacks, driving a car is a death sentence.”

Black motorists are disproportionately pulled over by white police officers, usually for minor traffic violations, but too often ending in homicide. Police shootouts have cursed black communities for generations. Says former police chief Charles Wilson, “The institution of policing in the US is inherently biased against people of colour and low income. It’s been designed that way for over 400 years.”

That bias was horrifyingly on display when George Floyd died in Minneapolis after a white police officer, Derek Chauvin, pressed his knee down on his neck for nine minutes and 29 seconds. But even as Chauvin’s trial was climaxing, 16kms away a young bi-racial man, Daunte Wright, 20, was shot dead by police. Enraged demonstrators marched to the heavily guarded police headquarters, barricaded by high metal fences and concrete barriers. Soldiers and policemen in riot gear hurled gas grenades as protestors threw rocks and cans.

Systemic racism propagates police excesses. Says black activist Kamau Bell, “It’s not just about a few bad apples. The whole system of policing is a rotten tree of white supremacy.” Whites feel superior to blacks, but racial profiling also embeds fear as whites see young black men as criminal and violent. Wright was killed by a policewoman, Kim Potter, with 26 years of experience. But her body camera video shows an officer in fright. 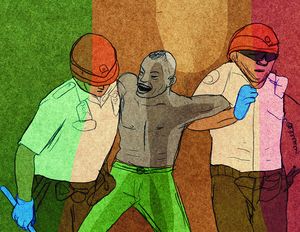 Fear impairs judgment. Potter, 48, was field-training the officers who pulled Wright over for expired license plates. They then discovered an outstanding warrant—he had failed to appear in court last June for charges of possessing an unlicensed gun and fleeing from the police. This inflamed the stereotyping of blacks with guns and crime. As a frightened Wright scrambles into his car, Potter repeatedly shouts she will Taser (stun gun) him. And she does, except she fires her pistol.

Caught on bodycam, Potter exclaims, “Oh shit, I shot him.” How an experienced police officer mistakes her loaded handgun for her bright yellow, lightweight stun gun is baffling. Potter’s senses may have scattered, but her aim was dead accurate. She fired one shot, got him in the chest. She is in jail, charged with second degree manslaughter. In Chicago, a policeman shot dead an allegedly armed 13-year-old boy—again, with one bullet in the chest.

Stereotyping begets suspicion and prejudice. When white officers see fancy cars driven by blacks, do they assume they are stolen? Wright had a shiny white car. In Virginia, policemen pulled over Caron Nazario, an Afro-Latino who was driving an expensive SUV, almost straight from the showroom. It had temporary licence plates.

A serving lieutenant, Nazario was wearing his army uniform. But that made no difference. Says Wilson, “Being in the uniform of the service of this country doesn’t protect you from nothing. Not if you get stopped by one of the idiots.” Nazario was pushed to the ground, hands forced back in a position frighteningly similar to Floyd’s. But unlike Floyd, Nazario walked out alive and is now suing the police. No longer are African Americans prepared to wait for another 400 years to end this black dystopia.