Words matter. At his inauguration four years ago, President Donald Trump spoke about “carnage on the streets of America”. That was crazy talk because there was no carnage on the streets. The power of words is that they may not reflect reality. But they can change it. And that is what happened in the waning days of Trump’s presidency.

In the waxing days of Trump’s reign in 2017, latent concern about the president soon became patent among non-partisan commentators. To assuage this, the stock answer of Trump’s apologists was: “Judge Trump by his actions, not by his words.” Trump’s words did not always metastasise into action, but it was not for the lack of trying.

Analysts who worried about Trump’s disdain for ethics and rule of law consoled themselves that he would be stopped by America’s fabled checks and balances. This expectation was proven both right and wrong. The system buckled under Trump’s assault mainly because his loyal appointees implemented his questionable orders. But the system also bucked. Several government officials refused to do his bidding. Trump publicly branded them “enemies of the people.” These officers lived under police protection because pro-Trump-trolls threatened to kill and rape, and vandalise their homes. Republican state officials and even Trump-appointed judges quashed his election fraud allegations, undaunted by the president’s inducements, threats and coercion. Men and women of honour who became heroes for simply doing their job. 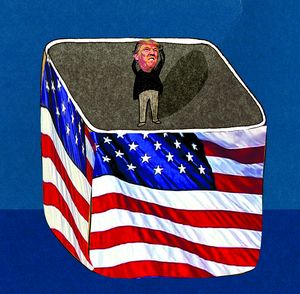 It is appropriate―or perhaps ironical―that character assassination is waged through “characters”. After Twitter doubled text length from 140 to 280 characters early in the Trump presidency, only 12 per cent of its users exceeded the original limit. One of them was tweet-addict Trump, Twitter’s best brand ambassador with 88 million followers. Now he had 55 words to weaponise. And he did, tweeting praise and poison, punishment and policy. He tweeted constantly, conceitedly and compulsively, to spread lies, polarise society, build his fanbase, shame his opponents, bamboozle his critics, argue his case and even fire his defence secretary.

Finally, Twitter fired Trump for his inflammatory words, banning him forever. It is easier to take tough action during the last gasps of a presidency. Still, corporate America realised that words matter. As do historians who have studied leaders through centuries. American historian Doris Kearns Goodwin reiterated the obvious: “Rhetoric leads to violence.”

This is recognised by all cultures, the power of words to destroy and inspire, debase and uplift, hurt and heal. Words are impactful because they spring from the speaker’s mind and strike the listener’s heart, stirring lasting feelings, ranging from joy to hatred. For all his faults, Donald Trump has always been transparent with his words. His tweets consistently reflected his thoughts, feelings and intentions. American Jewish theologian Abraham Joshua Heschel warned: “What starts out as a sound, ends in a deed.” The problem was that the “guard rails” of democracy in the US government and the Republican Party did not, or could not, take this danger seriously. And, America paid the price.

About an hour before the storming of the Capitol, Trump’s cue words at a rally―“stolen election”, “take our country back”, “walk to the Capitol”, “fight like hell”―goaded his assembled legion. His surreal Sancho Panza lawyer, Rudy Giuliani, instigated them to wage “trial by combat”, a medieval practice popularised by Game of Thrones, to settle disputes with a single attack. They did. And undid Trump’s presidency.

The word-deed correlation could not be starker. It all began with words of carnage. It ended with deeds of carnage.