Opium of the bigots

American analysts compare Donald Trump’s refusal to concede defeat to a child’s tantrum. This insults children and trivialises dangerous behaviour. This is not a fit of temper. It should be called out for what it is: a wannabe autocrat’s power grab. Some day we will discover Operation Cling—alleging voter fraud, bombarding courts, pressuring election officials, legitimising conspiracies—came from some tyrant’s playbook ferreted to Trump, probably by Rudy Giuliani, his fixer side-kick of many scandalous escapades.

Trump’s flaws are widely publicised. Books, documentaries and investigative reports reveal he is venal, vain, vulgar and vindictive, a liar on steroids, cruel and incompetent. He mauled America’s moral authority. He replaced ethical experts with fawning flunkies. He preyed on social divisions. His handling of Covid-19 brought America to its knees.

Despite these wrongdoings, 72 million Americans voted for Trump, higher than any presidential candidate thus far—except for President-elect Joe Biden. This massive vote bank is why the Republican Party is in Trump’s thrall, appeasing him instead of nipping his immoral power grab. Ignoring Trump’s misdeeds, the rich, who gained enormously from his tax cuts, the farmers and others who benefitted from some of his policies, voted for Trump. They can be fickle. But not his estimated 35-million strong “base”, many of whom are white, gun-owning rural residents without a college education, the so-called “left-behinds of globalisation”. No matter what Trump does, that base stays loyal. 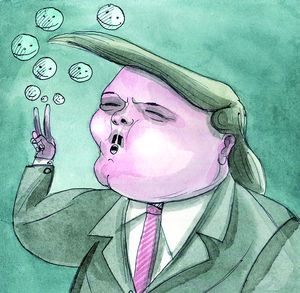 This defies understanding until one delves into the political psychology of autocrats and their supporters. In Escape from Freedom (written 1941), German psychoanalyst-philosopher Erich Fromm explores how the masses—not just willingly, but enthusiastically—allowed Hitler to grab power. The German lower middle classes, he observed, “had become especially isolated from their work and their society, owing to the rise of capitalism. One way of coping was becoming dependent on a ‘great’ leader.”

The autocrat and his followers are symbiotically bound together because they need each other, writes Fromm. The autocrat needs the adoring masses “because he cannot endure his aloneness and fear”. So the Covid-afflicted Trump bolts from the empty White House to address his cheering crowds.

Likewise, supporters ignore the pandemic to attend rallies because they reinforce their importance by being part of a “great” person or idea. Fromm says the supporter is “frightened—often only subconsciously—[and] has a feeling of inferiority, powerlessness and aloneness. Because of this, he depends on the leader, the great power, to feel safe. He escapes into idolatry.”

Alienation and powerlessness are aggravated during times of economic stress and upheaval, during war, pandemic, uprooting from villages, mass unemployment, cultural dislocation, loss of life and livelihoods, and a familiar way of life. White supremacism and scapegoating—Muslims, Mexicans, Jews—make supporters feel powerful.

Many wonder how Trump’s base can ignore science, evidence, visual proof, and shared experiences of their leader’s incompetence and callous disregard in handling the pandemic. Rational arguments do not work, Fromm says, because the supporters’ relationship “is based on emotional submission” to the leader. This is a political religion. Trump often calls himself “the chosen one”.

How does all this end? Fromm noted prophetically: “As long as he holds power, the leader appears—to himself and others—strong and powerful. His powerlessness becomes only apparent when he has lost this power, when he is on his own.” This insight is one reason why Trump does not want to concede and why the next phase will not be pretty.