An image sometimes captures an empire’s decline. The iconic photograph of nurses wearing garbage bags as protection against Covid-19 illustrates America’s waning. Decay is invisible in real time. Yet, the world watched as an unprepared and ill-equipped superpower was humbled by a tiny, invisible virus.

But the virus, like Donald Trump, is not the cause but the catalyst that accelerates existing problems. Trump shredded the US-led international order single-handedly, resulting in a disgraceful free-for-all. Instead of championing global efforts, the US became a Covid-19 medicine-grabbing buccaneer. When an imperium is no longer admired, respected or feared, it begins to unravel. Like a supernova, a superpower collapses when it runs out of fuel, when contradictory forces within collide.

Delusions of American exceptionalism is pervasive. Polls show 90 per cent of Americans believe egalitarianism is the top national ideal. Yet, studies confirm that the US is one of the most unequal societies in the world—stratified by racial injustice, rising poverty, declining mortality rate, plummeting industrial employment spanning five decades, collapsing infrastructure, failing schools, soaring deficits, staggering debt, unsafe cities, deteriorating health systems, outdated gun laws and popular pandemic beliefs that facemasks violate civil liberties and “Jesus is my vaccine”.  America still has the world’s richest people, best universities, companies, entertainment and is the hub of excellence and innovation. But the cracks caused by these contradictory forces have widened to chasms, deep and structural. Is this damage repairable? Is there a moral or economic glue to fix this polarised nation? 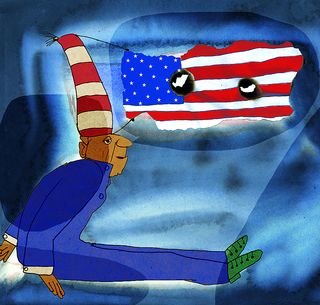 It is difficult because ideology fails the US exactly as it did the Soviet Union. Once “sacred”, capitalism has evidently gone rogue. It has spawned plutocrats who get richer by stymying scrutiny, blocking regulation and rigging democracy by engineering favourable laws. Communism had its proletariat, capitalism has its “precariat”—an underclass of the exploited—as described by author Martin Sandbu. Inhabiting this parallel universe are essential workers like drivers, cleaners and care workers who live precariously on temporary jobs, low wages and erratic shifts. The poor live on prayer. As Bulgarian political scientist Ivan Krastev says, “The poor do not fear the end of time, they fear the end of the month.” Even US allies agree that the “idea” of America as prosperous, powerful, free and fair has run out of fuel. Disillusioned with toxic American capitalism, they turn to Scandinavian socialism or as economist Thomas Piketty labels “participatory socialism”.

Like massive stars, empires self-destruct, with peripheries breaking away, leaving behind a contracting core, what astronomers call “the white dwarf”. The earlier empires have left behind their geographical dwarfs—Britain, Russia, Turkey, Italy and Austria. Pax Americana will end, but the United States will survive. But will it remain united or will it fragment like all previous empires? Liberal California on the periphery is the world’s fifth biggest economy; already there is talk of “Calexit”.

A supernova is a dying star’s “last hurrah”. But an empire’s collapse is rarely marked by a thunderous explosion. The end meanders in drips and drabs, in everyday failures, in sad whimpers and pathetic sights, unheard, unnoticed, unremembered. Like bankruptcy, the decline of an empire happens gradually, then suddenly.