I really screwed up.” It is a startling confession from any official, but astonishing when it comes from the CEO of the world’s largest sovereign wealth fund, popularly known as Norway’s Oil Fund. Abjectly apologising to his staff for returning from a $3 million luxury seminar in Philadelphia in a private jet, the fund’s contrite CEO Yngve Slyngstad messaged: “This was not in line with the modest profile of our brand. It was a lack of good judgment. I am truly sorry for letting our organisational culture down.” That culture forbids accepting even a free cup of coffee.

The bigger problem is that the “dream” seminar and jet were arranged by Slyngstad’s selected successor, Nicolai Tangen, a London-based hedge fund billionaire, who takes over as the fund’s CEO in September. The Oil Fund is a global gold standard for its prudent and ethical investments. It invests revenues from Norway’s huge oil and gas resources to benefit current and future generations of Norwegians. The $1 trillion fund owns 1.3 per cent of all listed shares in the world. It takes moderate risks—serving its higher purpose is more important than maximising returns. 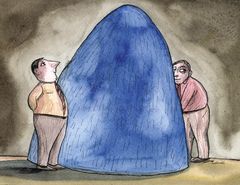 Experts say Tangen, 54, is unsuitable for the job. He is accused of seducing officials, ministers, diplomats and cultural czars with his wealth. Comments Norwegian parliamentarian Kari Elisabeth Kaski: “This is how economic elites try to buy power.” Famous anti-corruption campaigner Eva Joly warns: “The whole recruitment process is corrupted.”

Tangen was not on the published list of candidates, but he sprung upon the public at the height of the Covid-19 lockdown. Analysts say the fund should not be headed by a successful, risk-taking hedge fund manager, that too one with assets in tax havens—in Jersey, British Virgin and Cayman Islands. They say Tangen’s use of tax havens and trusts to avoid taxes has “an unfortunate signal effect”. Criticises Joly: “His appointment is catastrophic for the fund’s credibility in the international fight against tax havens.”

Anti-corruption activists have been crusading for years to shut down tax havens—those “sunny places for shady people” as author Nicholas Shaxson describes. They are primary conduits for money laundering, smuggling, parking ill-gotten wealth and tax evasion. If tax havens are eradicated, governments could invest the recovered tax revenue to create jobs and infrastructure. But the global elite ensures lawmakers keep tax havens legal to draw distinctions between tax avoidance (legal) and tax evasion (illegal). Says Kaski: “Tax havens are legal. But that does not make them moral. They are a problem for the global economy. The Oil Fund is needed to lead the fight against tax havens.” Laws and loopholes enrich the wealthy. As a foreign resident in London, Tangen does not pay taxes either to Norway or Britain, proving US President Donald Trump’s dictum: Only idiots pay taxes.

But when he moves to Oslo, Tangen will have to pay a yearly property tax of about $7 million. His annual salary is $1 million, meaning he would pay more in taxes in a year than he would earn during a six-year tenure. “I am not doing it for the money,” he says, stating the obvious. The prestige of having been the boss of the world’s biggest fund will be major capital for his post-CEO investments.

After 12 years of faultless stewardship, outgoing CEO Slyngstad muses: “This is like mountain climbing. It is while climbing down, when you are tired and think that you have made it, that you fall.” Tangen falls even before he begins his climb, as the Oil Fund, Norway’s pride and glory, faces the biggest test in its 22-year history.