It was a “political earthquake”, no less. The incident in the east German state of Thuringia created shockwaves. People, politicians and pundits denounced it as “unforgivable”, “inexcusable” and a “lust for power that trumps moral responsibility”.

So what happened? Thomas Kemmerich was elected premier of Thuringia with the support of the far right Alternative for Deutschland (AfD)—a first in post-war Germany. Inclusion of far right parties in coalition governments is increasingly common in Europe, but because of Germany’s Nazi past, mainstream political parties shun the far right. Said leftist parliamentarian Martin Schirdewan, “This breach of taboo shows how weak resistance to the rise of the right in Germany is.” Kemmerich belongs to the pro-business Free Democratic Party, an ally of Chancellor Angela Merkel’s Christian Democratic Union (CDU). Censured Merkel: “This broke with a core conviction, that no majorities should be won with the help of AfD.” 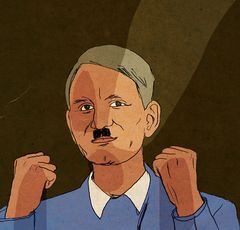 The AfD’s kingmaker role in Thuringia sent shivers down Germany’s spine because it was an eerie repetition of history. Exactly 90 years ago, Adolf Hitler triumphantly proclaimed: “We achieved the greatest success in Thuringia. Today we really are the crucial party there. The parties in Thuringia cannot get a majority without our assistance.”

It is the same situation now. Kemmerich rationalised: “There is no choice but to get AfD help to govern.” Thuringia, in former East Germany, is a far right stronghold. In the recent election, the left party won 31 per cent of the votes and the AfD 23 per cent. Kemmerich’s party won only 5 per cent, so its ally CDU’s 21 per cent vote was insufficient for premiership. Thus, the pariah AfD became the kingmaker. In 1930, the Nazi debut in the Thuringia government was its first major breakthrough in the Weimar Republic, culminating with Hitler’s ascension as chancellor in 1933.

The AfD leader in Thuringia, Björn Höcke, apparently aims to follow Hitler’s rise. Last September, a court ruled that the anti-semitic and racist Höcke could be legally termed a “fascist” as the description “rests on verifiable fact”. German media accuses Höcke of using Kemmerich as his “tool”.

Post-war Germany vows never to forget the past, including the Nazi persecution of Jews. Höcke trashes this resolve, claiming that Germany is “crippled” by its “stupid” politics of atonement and describes the Berlin Holocaust memorial as a “monument of shame in the heart of the capital”. He leads an extremist faction in the AfD, ominously called “The Wing”.

Many neo-Nazis seek refuge in the AfD, which began as a Eurosceptic party and floundered until 2015 when Merkel’s welcome of over a million, mostly Muslim, migrants provoked a fierce public backlash. The AfD transformed into an anti-immigration, anti-Islam, anti-mainstream media, xenophobic party. It scored spectacular successes. For the first time, the AfD entered the German parliament, becoming the main opposition party with 89 members. It won seats in all 16 state parliaments and in the European Parliament. The party’s moderate faction is led by Alice Weidel, 38, a lesbian economist who lives in Switzerland with a Sri Lankan partner and its extremist faction is led by lawyer Alexander Gauland, 76. Like Höcke, Siegbert Droese, head of the AfD in Leipzig, is a Hitler fan. One of the cars in his convoy had the licence plate AH1818, a neo-Nazi code for Hitler.

The AfD-backed Kemmerich faced a firing squad of abuse: “hypocrite”, “traitor” “charlatan”. He resigned and Merkel’s party leader and potential successor Annegret Kramp-Karrenbauer stepped down for failing to control her regional partymen. Having caused a seismic episode, kingmaker Höcke retreated. In 24 hours, public outrage clipped the wings of the wannabe Hitler. But he lies in wait.