She is being compared with history’s enduring icons, from Mother Teresa to Martin Luther King. The transformation of 16-year-old Greta Thunberg from a lone Swedish schoolgirl to the world’s biggest climate leader is remarkable. Inspired by her, schoolchildren and adults have spilled into the streets in 185 countries, demanding their politicians save the planet. Greta proclaimed: “I have a dream that the powerful take the climate crisis seriously. The time for their fairy tales is over.”

Greta’s activism began with skipping class and holding a placard stating: “school strike for climate”. Within a year, schoolchildren around the world left their classrooms to hold protest posters, screaming together outside parliaments to force politicians to “listen” to climate science. Greta is now a global celebrity, featuring in Time’s 100 influential people, met the Pope who told her “keep doing what you are doing” and has addressed parliaments, congresses and the World Economic Forum where she told global leaders: “I want you to panic. I want you to feel the fear I feel every day.” 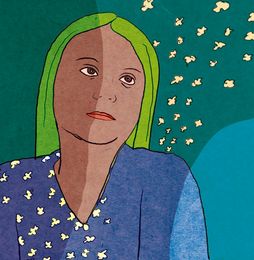 It is her inner demons that make Greta’s meteoric rise especially remarkable. When she was 11 years old, she stopped talking and eating for two months. After battling depression, eating disorders and anxiety attacks, she was eventually diagnosed with Asperger’s syndrome, which falls in the autism spectrum. She has difficulties with social interaction, displays repetitive patterns of behaviour and obsessive compulsive behaviour.

In her Swedish book, Scenes from the Heart, Greta’s mother Malena Ernman presents her family’s crisis as a metaphor for a planet in crisis. When she finally starts eating again, Greta chews only pancakes filled with rice. Her lunch box must be kept in the school refrigerator, but it cannot have a sticker with her name on it. Stickers and newspapers trigger Greta’s OCD against eating.

A well known opera singer in Europe, Malena struggles with both her daughters. Greta’s younger sister Beata suffers from Asperger’s, OCD and attention deficit hyperactivity disorder. Malena’s heart-wrenching anecdotes include Beata’s sudden outbursts of anger, during which she screams obscenities at her mother. What is normally a 10-minute walk to dance class takes an hour because Beata insists on walking only with her left foot forward and demands that her mother walk the same way. She insists Malena wait outside during class, forbidding her to move or even go to the bathroom. Malena obeys, but the child invariably collapses weeping in her mother’s arms.

People with Asperger’s “view the word in stark terms”, says Tony Attwood, British psychologist and leading expert on Asperger’s syndrome. “They are known for speaking their mind, being honest, determined and have a strong sense of social justice.” Greta’s achievement is also a tragic reminder of the unfulfilled potential of millions of autistic children.

But Greta is trolled. Climate sceptics tell her to attend school instead of lecturing adults. Parents worry about the consequences of Greta’s fears that touch a chord in youngsters everywhere. A child protestor in New York said, “Our teachers say we must study for a good future. But if we do not protect the planet, we will not have a future.”

Some are uncomfortable about a teenager at the helm, wondering who is pulling the strings. For instance, a US-based foundation manages Nobel laureate Malala Yousafzai. Greta, the freckled, awkward girl with her two plaits, simple dress and plain speak is an international sensation—because she is authentic. But now she also uses adult jargon like “scaleable action” and “social tipping points”. Still, her fans expect her to fulfil an icon’s destiny and win this year’s Nobel peace prize.