So, the real estate tycoon-turned-United States President, Donald Trump, offers to buy remote Greenland, the world’s biggest and most sparsely populated island. That Greenland is not for sale and is an autonomous region of a close American ally, Denmark, is a minor detail, not a deterrent, on Trump’s radar. He declared: “Essentially, it is a large real estate deal.”

Danish Prime Minister Mette Frederiksen’s dismissal of Trump’s offer as “absurd” so infuriated him that he shockingly cancelled his early September state visit to Denmark. German political scientist Josef Braml analysed Trump’s behaviour: “He sees himself as a boss, articulates clear goals and demands and rewards or punishes subordinates with advantages or disadvantages if they fail to meet his requirements.” Soren Espersen of the Danish People’s Party said bluntly: “Here stands final proof that Trump has gone mad.” 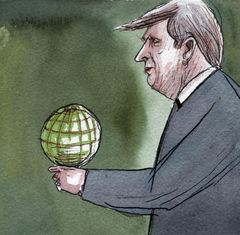 Trump’s behaviour is often erratic, unpredictable, insulting and unreasonable, but grabbing Greenland is neither absurd nor unprecedented. Records show that American attempts to acquire Greenland go back 150 years. Resource-rich buffer zones are honeypots. In 1867, the US bought Alaska from Russia for $7 million. A year later, American officials coveted Greenland—a quarter of America and half of Europe in size, with a longer coastline. They believed summer navigation through the shorter northern polar route would connect east and west, shrinking shipping time between the US and Japan-China. Besides, fish and minerals were “inexhaustible”. Though the Congress vetoed the purchase of Greenland then, American commerce exhausted Greenland’s aluminium ore deposits by 1987.

When Nazi Germany occupied Denmark in 1940, the US established a military base in Greenland. After World War II ended, the US offered in vain $100 million in gold bars to buy Greenland. During the Cold War, the United States launched a secret project to build nuclear missile launch sites under Greenland’s icecap to strike targets in the Soviet Union. The camp was abandoned in 1966 due to the ice sheet moving. A complete icecap melt—perhaps within a century—would release tons of buried radioactive waste into the ocean.

Strategic and commercial reasons to gobble Greenland are even more compelling today. It is a bulwark against Russian military ambitions. China is now prowling for minerals and strategic footholds in the Arctic. Greenland is a goldmine for rare-earth metals required to manufacture mobile phones, computers and electric cars. Buckling under American pressure, Denmark finally blocked Chinese projects in Greenland.

Under the Arctic lies 13 per cent of the world’s potential remaining oil and 30 per cent of gas reserves. The Arctic is the new “Great Game” hunting grounds for the “Big Five” North Pole powers—the US, Canada, Russia, Norway and Denmark—thanks to Greenland. Compared with 67 million people who live in Britain, Greenland, which is nine times bigger, is home to 56,500 Inuits—fiercely independent, but few.

Trump, the Artful Dealer, targets the opponent’s weak flank, claiming his offer is a favour to Denmark, because they can save their annual $650 million subsidy to Greenland. Says Morten Ostergaard, Danish Social Liberal Party leader: “The man is unpredictable. It shows why we, now more than ever, should consider European Union countries as our closest allies.”

But this is not the end of the Greenland saga, especially if Trump continues in office after the 2020 elections. After all, Greenland is almost as close to Washington as to Copenhagen. In real estate as in geopolitics, it is location, location, location.