The similarities between the two “blond bombshells” are uncanny. In appearance and temperament, US President Donald Trump and Britain’s prime minister aspirant Boris Johnson could be... related. In Manhattan, the public mistook Johnson for Trump on three occasions. The Independent columnist Matthew Norman satirises, “There is the same penchant for comically deranged hair, along with the outlandish narcissism, vulgar populist grandstanding, bone idle refusal to read a brief and limitless capacity for blurting out the crazily offensive.”

Johnson’s tactics are Trumpian, too. Leading the Tory pack to replace the outgoing prime minister, Theresa May, Johnson threatens to withhold the €44 billion Brexit divorce bill that Britain must pay the European Union for leaving. Johnson abhors alimony. Like Trump, he has a history of multiple marriages, philandering and adultery. Seeking to use the payment as a bargaining chip to extract a “better deal” from the EU, Johnson proclaimed, “In getting a good deal, money is a great solvent and a great lubricant.” Such populist claims may grease his way to 10 Downing Street, but are unlikely to soften the EU to renegotiate. 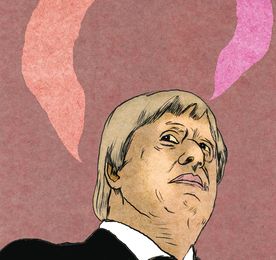 Both Trump and Johnson are anti-establishment disrupters, politically incorrect, self-promoting, publicity-loving provocateurs, uninterested in detail and policy. Both use politics as theatre. Both have a history of lying. Johnson was sacked twice—by The Times newspaper for inventing a quote as a journalist and by Tory leader Michael Howard for lying about an adulterous affair.

But none of this matters as Johnson emerges the clear front runner in the peculiar Tory leadership race. Several candidates fended off scandals involving drug abuse. Johnson admitted to having snorted cocaine (but it did not go up his nostrils, he claims); foreign minister Jeremy Hunt admitted to drinking cannabis lassi in India. Another admitted to using opium, and several others to smoking cannabis. First Minister of Scotland Nicola Sturgeon observed: “What a horror show the Tory leadership election is. Tax cuts for the richest, attacks on abortion rights, hypocrisy on drugs, continued Brexit delusion.”

Johnson would like to handle Brexit, Trump style. Said he: “Imagine Trump doing Brexit.... He would go in bloody hard. There would be all sorts of breakdowns, all sorts of chaos. Everyone would think he had gone mad. But actually you might get somewhere... there is method in his madness.” Perhaps. But there is one big difference. Britain is not America.

Biographers say there is method in Johnson’s madness, too. He has spent years carefully crafting his public persona as a bumbling bloke prone to rambling speeches, risqué jokes and racy rhetoric. Noted biographer Sonia Purnell: “He is a great actor, he is a showman. The whole ruffling-the-hair thing was about making sure he did not seem too ambitious. The ‘gaffes’ were not really gaffes, they were scripted.” His biographers say Johnson is “ferociously ambitious and competitive”.

There are significant differences between Trump and Johnson, notably Johnson’s intellect. Educated in Eton and Oxford, Johnson can sing in German, joke in French and debate with scholars on Greek vs Latin literature. A gifted writer, he has authored a biography of Winston Churchill. Said American political scientist Geoffrey Vaughan, “Trump is ostentatiously rich and Johnson ostentatiously educated.”

But for all his erudition, critics say Johnson lacks focus and preparation. “It scares the living daylights out of me to think of him forming a cabinet, because he is not good at selecting people,” said Purnell. Here, too, Johnson could borrow from Trump’s playbook—the blond leading the blond.