The princess of Norway and her shaman lover

The daughter of the current King of Norway, Princess Märtha Louise, had to renounce ‘Her Royal Highness’ title a decade ago after she started her ‘Angels’ school to train people “to get in touch with their angels”. Now the 47-year-old divorced mother of three girls risks losing her ‘Princess’ title, too. People gasped at the identity of her new lover, Durek Verrett. He is a shaman, a self-proclaimed third generation “psychic, clairvoyant, risen-from-the-dead spiritual guide and gifted healer”. Durek, 44, is American, black and bisexual. About a former male lover, Durek explained: “It is not about gender, boxes and labels. It is about love. I am an interesting person.” With such details surfacing, people are yet to exhale. 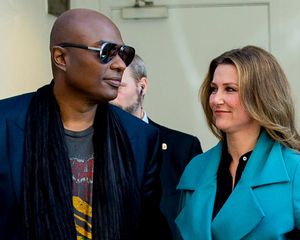 Social media is a parallel universe, but mainstream media and the general public studiously shun disparaging comments about Durek’s race and nationality to avoid sounding racist and xenophobic. But they satirise his voodoo witchcraft. Durek claims he was drawn into shamanism by his grandmother and Croatian princess Suzanna von Radic. In an article titled The shaman’s scam, the Icelandic website Vantrú revealed Durek’s grandmother died two years before he was born and she was not a princess, but a fraud. Polls show 92 per cent of Norwegians believe the princess brought home a charlatan. Durek was miffed by the negative barrage. Mocked journalist Gunnar Stavrun: “As a clairvoyant, didn’t he see it coming?”

Durek seems a marketing genius, boasting of celebrity clients like “soul sister” Gwyneth Paltrow. The Hollywood star’s company Goop was fined $145,000 for falsely claiming fertility benefits for its jade “vaginal eggs”. But Princess Märtha Louise is besotted, declaring on Instagram: “He has made me realise that unconditional love actually exists here on this planet.” Apparently Durek was conditioned. He claims his mother predicted when he was a teenager that he would marry a Norwegian princess. Märtha Louise gushed, “I love you from this eternity to the next.” Leading daily Aftenposten wisecracked: “Last time, her eternal love lasted 15 years.”

It is not goofy romance but crass commerce that experts object to. Märtha Louise announced her relationship on the eve of their Scandinavian ‘The Princess and the Shaman’ tour that promised to take attendees “on a magical journey that opens up your unique truth”. Ticket sales from the five events can rake in Rs 12 crore.

Public outrage exploded. Said social commentator Vebjørn Selbekk, “She can fall in love with whomever she pleases. But milking her ‘Princess’ title for commercial purposes is wrong. It drags down the monarchy.” Historians say there is no such precedent in any European royal family. The church withdrew permission to host an event. As pressure mounted, the Royal Palace announced it is in “dialogue” with Märtha Louise about using her Princess title.

In egalitarian Norway, media scrutiny is intense on questionable behaviour by people in high places. Forget golden carriage, there was not even a chauffeured limousine to fetch Durek from the airport. The princess chauffeured the shaman. The marketing genie cannot fly on a magic carpet with his Viking princess in her Arctic homeland. But America worships movie stars and royalty. This shaman is onto a good thing.