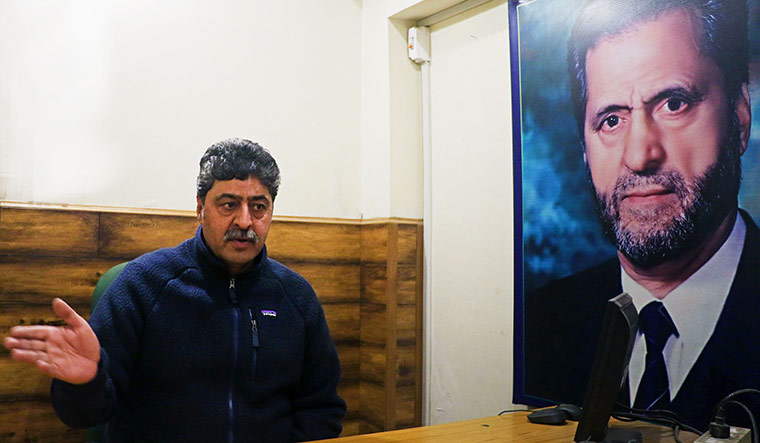 KASHMIR’S POLITICS IS likely to witness a major change, as separatist leader Bilal Gani Lone is preparing to bid farewell to separatism and enter the mainstream. Bilal is the elder son of Abdul Gani Lone, the Hurriyat Conference leader who founded the People’s Conference. Considered a moderate who had wide support across north Kashmir, Abdul Lone was thrice elected from Handwara in Kupwara district before militancy erupted in Kashmir. He was assassinated on May 21, 2002, during a rally at the Srinagar Eidgah.

Sources told THE WEEK that Bilal would soon tour Kupwara and other districts in north Kashmir to reach out to his father’s loyalists and shore up support for his electoral plunge. The Centre has promised to hold the assembly polls early next year, after the electoral rolls are revised by the end of November.

Bilal joined the Hurriyat Conference after hardliner Syed Ali Shah Geelani and his supporters demanded that the People’s Conference be expelled from the separatist grouping for fielding proxy candidates in the 2002 polls. Sajad Lone, Bilal’s younger brother, had by then become the head of the People’s Conference. When Hurriyat chairman Molvi Abbas Ansari rejected Geelani’s demand, the Hurriyat split into moderate and hardliner factions. Bilal joined the moderate camp while Sajad quit separatist politics and contested the 2009 Lok Sabha polls from north Kashmir. In 2014, Sajad won from Handwara and his People’s Conference bagged a second seat in Kupwara. He later joined the PDP-BJP coalition and became a minister.

Apparently, Sajad had already picked the candidate for Trehgam, Handwara and Kupwara, where he believes his party’s chances are strong. If the People’s Conference can win three seats in the district, it would be able to bargain hard in a coalition government.

But opponents can paint the People’s Conference as a BJP ally. It would harm the party’s prospects, given the anger and frustration among the people over the Union government’s August 2019 decision to take away Jammu and Kashmir’s special status and reduce it to a Union territory.

Sources close to Bilal said he would seek votes in the name of his father. Addressing a gathering in Kupwara on October 25, he said he considers himself a political worker, not a leader. “Any political worker who leaves people to their fate in the present circumstances is not fair,” he said. “I have some plans that will move forward, only if you support me.”

Bilal said “some difficult decisions” would have to be considered. “There are a lot of issues, but the question is: Are you going to walk along with me?” he asked. “Inshallah,” responded the crowd. “I will give you a call,” said Bilal, “and if your response is good, then we would walk together from one village to another.”

Unlike Sajad, Bilal is known for keeping a low profile and not courting controversies. A pacifist, he has supported all peace initiatives in Kashmir. He was part of the Hurriyat Conference delegation that met deputy prime minister L.K. Advani in Delhi in 2004.

Bilal’s decision to enter mainstream politics has surprised the government and security authorities. Sources said the security agencies were convinced that his decision to bid farewell to separatist politics was his own, and not taken at the behest of anyone. Sources said Bilal had informed Hurriyat leaders that he would not be part of the group anymore.

Bilal’s decision to enter the mainstream has implications for separatist politics. Other separatists might take their cue from him and follow suit. Also, Bilal’s campaign will have a direct bearing on the People’s Conference chances in Kupwara district.

The Hurriyat had started to lose popular support long before Kashmir’s special status was withdrawn. The Union government has nevertheless has gone hard on separatists and their supporters. In September 2021, separatism took a hit when Geelani, considered the face of hardline separatist politics, died. Leaders like Yasin Malik have since been sentenced to death for “seditious activities”. Malik is also facing trial in cases related to his alleged involvement in terror funding, the kidnapping of Union home minister Mufti Mohammad Sayeed’s daughter Rubaiya in 1989, and the killing of IAF personnel in Srinagar in 1990.

That leaves Mirwaiz Umar Farooq, the leader of the moderate faction to which Bilal belonged, to shoulder the burden of separatist politics. But, since August 2019, Mirwaiz has been under house arrest and has not led prayers at the Jamia Masjid in Srinagar, Kashmir’s most influential mosque.

Bilal’s move is significant in this background. “I have to discuss many things with you, but I first wanted to see whether the decision I am going to take has your support,” he told the crowd in Kupwara on October 25. “Now I have realised that we can go down this route.”