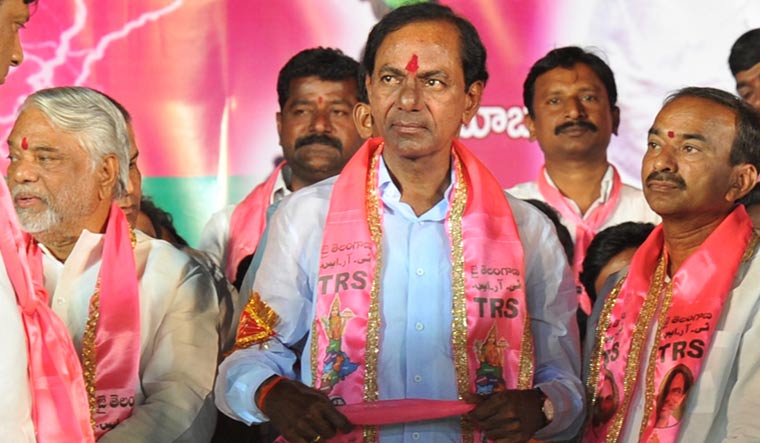 THE PANDEMIC HAS not halted politics in Telangana. On April 30, Chief Minister and Telangana Rashtra Samithi president K. Chandrashekar Rao was being treated for Covid-19 at his farmhouse, about an hour from Hyderabad. The next in command, Information Technology Minister and TRS working president K.T. Rama Rao, also had the virus and was admitted in one of Hyderabad’s top corporate hospitals. The state had, that day, seen a high number of single-day cases and deaths, and Health Minister Eatala Rajender had his hands full. Everyone had their eyes on the virus, and had missed the brewing political storm.

In the evening, an hour after the municipal elections, a regional news channel—managed by the chief minister’s relatives and followers—broke news of alleged land grab by Rajender on the outskirts of Hyderabad. Two other channels, also known to toe the TRS line, followed suit. The chief minister ordered an inquiry by late evening, and revenue officials started their investigations the following day. Less than 24 hours later, Rajender was dropped from the cabinet.

Rajender had been one of Rao’s closest associates, standing by him since the days of the Telangana agitation. A businessman and four-time MLA, he was the party’s floor leader in the assembly before he became the state’s first finance minister. In his second term, he was given the health portfolio.

Now, the powerful figure has been reduced to an outsider facing the full might of the government. As per the official version, some villagers in Achampet and Hakimpet, on Hyderabad’s outskirts, have alleged that Jamuna Hatcheries, a poultry firm managed by Rajender’s family, encroached upon their assigned land. Based on their complaints and the chief minister’s order, the district collector prepared and submitted a preliminary report within a day. It said that the company had not only illegally occupied 66 acres of assigned land, but also used the land for non-agricultural purposes.

Rajender denied any wrongdoing and dared the government to initiate an inquiry by a sitting judge. He also subtly conveyed that he was a victim of a political ‘witch-hunt’. “I am ready to face anything. Let them do whatever they want, I will not be scared,” he told THE WEEK.

As soon as he was sacked, Rajender got support from not just his followers, but also his opponents. The Congress and the BJP asked the state government why similar allegations against other TRS ministers and MLAs were not investigated with the same enthusiasm. In his constituency of Huzurabad, Rajender got a grand welcome by hundreds of his followers.

“Irrespective of age and caste, there is a feeling among everyone that injustice has been done,”he said. “Some of my well-wishers became so emotional that they cried. But many of them also feel that whatever has happened will be good for Telangana as things will be different from now.”

Rajender is yet to announce his next move, but he will most likely quit the party, contest the byelection on a different symbol, float a new party with likeminded leaders and intellectuals, and undertake a padyatra. His immediate concern, however, is to resist systematic attempts to cut his clout. In the past 10 days, the Telangana government has transferred a number of police officers and revenue officials posted in and around Huzurabad who were apparently friendly with Rajender. Putta Madhu, a zilla parishad chairman known to be close to him, was arrested in an old criminal case. “These are cheap tactics,” said Rajender. “If they had confidence in people, they would not lure my people with money or blackmail them with cases. I never expected this level of attack on me.”

Though he did not name him, Rajender’s ire was directed against the chief minister. As per those close to him and a few senior journalists working for the channels that broke the news, a plan was hatched a few days back to highlight the alleged land encroachment. Having got wind of it, Rajender had tried to meet the chief minister several times, but failed.

“This was expected. KCR was looking for an opportunity to sideline him for a long time,” said a TRS leader who did not want to be named. What exactly created this rift between the two is being debated. Sources associated with TRS affairs said Rajender, being a tall leader within the party, was feeling suffocated over the way the chief minister treated him and was frustrated that he did not get enough freedom in his work. Moreover, the chief minister was always inaccessible. Rajender was not submissive like other leaders, which made him a sound like a rebel. “I am also the rightful owner of the pink flag (TRS party),” he had said as early as 2019. More such rebellious comments followed.

“If you look at KCR’s history, he never tolerates dissenting voices,”said a senior Telugu journalist and political observer. “Rajender was in the firing line. What seems to have forced KCR to go after Rajender was the latter’s meetings with a few opposition party leaders and powerful representatives of different communities at the start of this year.”

Said political analyst and former member of legislative council K. Nageswara Rao: “[It was] no doubt a political operation, but I cannot say if the allegations against him are true or false. Now, we have to wait and see what he does. If his agenda is to just float an anti-KCR front with other opposition members, it may not work as every political party has its own shop and customers.”

Many leaders have left the chief minister and ventured out on their own. Almost none of them have made an impact. For the TRS camp, Rajender would be just another name on that list. But, for his supporters, he has a credible image and the money power to form a new political front in Telangana.