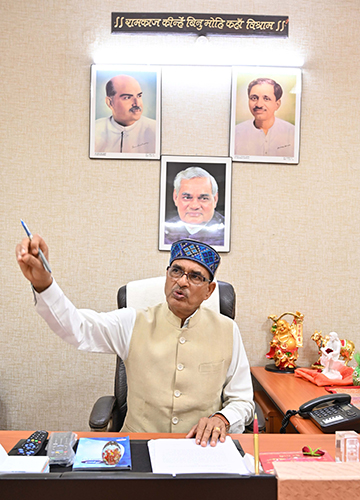 WHILE THE ENTIRE nation waited expectantly for the assembly election results from West Bengal, Assam, Tamil Nadu, Kerala and Puducherry on May 2, it was business as usual for Madhya Pradesh Chief Minister Shivraj Singh Chouhan. He chaired a Covid-19 review meeting with senior ministers and officers, underlining the importance of “breaking the infection chain”. Finally, when the results came, there was no immediate reaction from Chouhan—despite the BJP’s poor performance.

The loss in West Bengal turned out to be particularly devastating for the BJP, as it had invested a great deal of effort and money in the state. Although the party improved its tally significantly compared with the 2016 elections, it still lost to the Trinamool Congress by a huge margin. In Madhya Pradesh, too, the BJP performed poorly; the Congress’s Ajay Tandon won the Damoh assembly byelection by a margin of around 17,000 votes.

Chouhan’s first reaction came almost 24 hours after the results were announced. He applauded the BJP wins in Assam and Puducherry, hailed the “miraculous growth” of the party in West Bengal and praised the leadership of Prime Minister Narendra Modi, Union Home Minister Amit Shah and party president J.P. Nadda. But there was not a word about the comprehensive defeat in Damoh.

Even a week later, Chouhan has not spoken, despite the BJP serving a show-cause notice to former minister Jayant Malaiya and expelling his son and four others for “anti-party activities” in the context of the Damoh defeat. The district collector and the superintendent of police of Damoh were, meanwhile, shunted out.

This is in stark contrast with Chouhan’s high-decibel campaign in Damoh and also in West Bengal and Assam in the first half of April, when Covid-19 cases were rising fast. Today, he quietly and diligently goes about reviewing the pandemic situation in Madhya Pradesh.

Predictably, he reacted to the post-poll violence in West Bengal and to Jharkhand Chief Minister Hemant Soren’s unflattering tweet about Modi. Otherwise, Chouhan has kept his public statements strictly confined to pandemic-related issues.

While this uncharacteristic silence from the usually vocal Chouhan could be because of the stress of combating the pandemic, political observers say it could well be an expression of the relief that the mixed results for his party might have brought him. 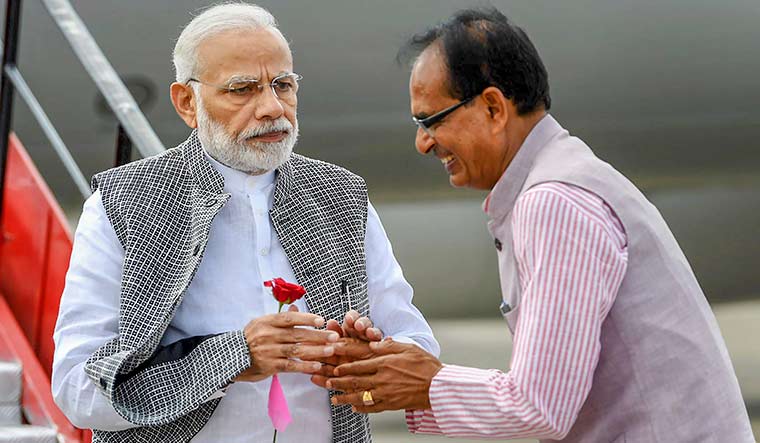 Ahead of the assembly polls, there were whispers in Bhopal’s political corridors about the possibility of Chouhan being replaced, despite the fact that six months ago he had led a successful bypoll campaign and engineered a majority for the BJP. Leaders from Madhya Pradesh, who were playing key roles in the campaign in West Bengal and Assam, were said to be frontrunners for his post.

“It could be called speculative, but had the BJP won West Bengal, Vijayvargiya and Mishra would have emerged far stronger and there could have been the possibility of a leadership reshuffle,” said political writer Rasheed Kidwai. “But the results put the central leadership in check and brought down the graph of Shah to whom Vijayvargiya and Mishra are close. So, in that way, Chouhan has got his breathing space despite the big loss in Damoh.”

Political analyst Manish Dixit said the BJP’s loss in West Bengal and the prevailing Covid situation might help Chouhan thwart any likely political challenge. “Last year, while Vijayvargiya was quite engaged in West Bengal, Tomar and Mishra were favourites for the post of chief minister,” he said. “Yet, Chouhan was the choice of the party leadership because of his popularity among the masses and his administrative experience in the face of the first wave of Covid-19. So, it does not seem that in the current situation, the party will think of any changes.” Although Assam under Tomar brought good news for the BJP, the Bengal result and the public backlash against the pandemic management eclipsed the achievement, said Dixit.

Chouhan remains a target for the opposition Congress, nevertheless. “The BJP central leadership has never really favoured Chouhan and it is not happy with his performance even now. We have a feeling that once the present Covid-19 crisis blows over, internal attacks on Chouhan will increase at the state level and the leadership might go in for a political change,” said K.K. Mishra, state Congress general secretary in charge of the media cell. “For us, it would be quite beneficial if Chouhan continues as chief minister, because his popularity among voters and local BJP leaders is waning, and that will help the Congress in the next polls in a big way.”

Political observers say that in the past Chouhan had benefited from image building exercises led by senior bureaucrats close to him, which helped him emerge as a figure bigger than the party. But many of those officers are now retired, making things difficult for Chouhan.

Deepak Vijayvargiya, the BJP’s chief spokesperson for Madhya Pradesh, said the state government was doing very well under Chouhan, especially in dealing with the pandemic, and that the party was completely behind him. “The gossip the Congress and others are indulging in does not matter. It is the nature of the Congress to engage in such speculative talk simply because its leaders have nothing else to do, having been rejected by the people completely,” he said. “It is a war-like situation with the pandemic and there is no question of any political activity.”