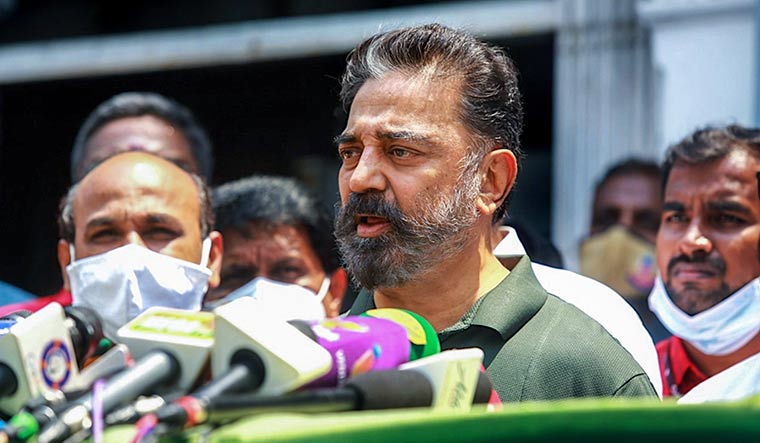 ON MAY 2, A VIDEO of filmmaker-turned politician Kamal Haasan walking out of a counting centre in Coimbatore with a torch—his election symbol—in hand and a sombre look on his face, went viral. Kamal lost in the Coimbatore South constituency to the BJP’s Vanathi Srinivasan, after leading the race for most part of the day. The man who claimed the legacy of former chief minister M.G. Ramachandran and pitched himself as an alternative to Tamil Nadu’s established Dravidian parties fared disastrously in the assembly elections, with the remaining 153 candidates from his Makkal Needhi Maiam (MNM) losing their deposits. The MNM polled just 2.5 per cent of the votes compared with the 3.7 per cent it got in the 2019 Lok Sabha elections, finishing behind parties like the Naam Tamilar Katchi and the Amma Makkal Munnetra Kazhagam.

Apart from the drubbing it received in the elections, the MNM is also facing a major internal revolt. Businessman R. Mahendran, who was the MNM vice president and candidate from Singanallur, quit, saying there was “no democracy in the party”. In an emotionally charged letter running into several pages, Mahendran, who was Kamal’s right-hand man, listed what he felt were Kamal’s failures and criticised him for relying entirely on the advice of an election management company called Sankhya Solutions. “I resign... because in the last one month after the assembly elections, I had lost all hope for any semblance of change in how the party is being run…. I am sad to say that there is a decline in your tenacity of purpose, which lies buried under a style of operation that reeks of a non-democratic manner of running a political party. I will leave you to decipher who your true loyalists are,” wrote Mahendran. Other senior leaders, including V. Ponraj, M. Muruganandam, A.G. Maurya, R. Thangavel, Umadevi, C.K. Kumaravel, Sekar and Suresh Iyer (the head of Sankhya Solutions), resigned from their party positions.

“The debacle was caused by the wrong strategies suggested by Sankhya Solutions. It ensured that people like me who were with our leader since the party was launched no longer remained in the inner circle,” said Mahendran. He revealed that Kamal initially had talks with poll strategist Prashant Kishor’s Indian Political Action Committee (I-PAC), but later hired Sankhya Solutions.

Mahendran had suggested that Kamal should contest from Velachery, a constituency in Chennai with a significant vote bank of IT professionals. But his strategy team chose Coimbatore South, where Mahendran had polled the highest number of votes for the party in the 2019 Lok Sabha elections. “This was a wrong choice as Lok Sabha and assembly elections are viewed differently by the people,” said Mahendran. M. Tholkappiyan, vice president of the MNM’s media wing, too, blamed Sankhya Solutions and Iyer for the mess in the party. He said Iyer directed every move in the party and even spoke on Kamal’s behalf.

Within a few hours of Mahendran’s resignation, Kamal released an emotional statement, calling his former colleague a “betrayer”. “He claims there is no democracy in the party. He is the biggest example of the fact that democracy sometimes fails. He has lied to the faces of the people who gave him identity. ‘Remove the betrayers’, resonated the unanimous voice of the party. Mahendran was on top of that list. Happy that a weed had removed itself,” said Kamal. Sankhya Solutions, too, released a statement, saying Kamal hired it as per party protocols and that the team only advised the MNM leadership without meddling in its internal affairs.

Mahendran’s long letter threw some light into the functioning of the MNM and of Kamal. MNM sources told THE WEEK that Kamal relished a demigod status and wanted to be like former chief minister J. Jayalalithaa. An office-bearer said Kamal would not even roll down his car windows while campaigning. “He would not shake hands with voters, saying he was a celebrity and people should not be able to reach him that easily.” Once when too many people surrounded his campaign vehicle, Kamal threw down the torch in anger. He was also frustrated that the microphone was not working properly. “Kamal has always come across as an angry, melancholic figure who would question every wrong in society. But he suffers from a big boss psyche, which will not help him shine in politics,” said Ramu Manivannan, head of the department of politics and public administration, University of Madras.

In the last few months, whenever he attended a meeting, Kamal would allow a chair on the dais only for himself, while others had to stand or were given seats a few metres away. This was the style followed by Jayalalithaa during the 2016 elections because of her poor health. But when Kamal, whose biggest strength was his public visibility as an intellectual star, chose to emulate her, the voters overwhelmingly rejected him.

Another issue which led to the tussle within the party was a meeting organised by Sankhya Solutions at a luxury hotel in Chennai to celebrate the MNM’s performance in the polls. Sources said the meeting was scheduled even before the results were declared. “It was the money of our party members which was spent for the meeting,” said an office-bearer.

Despite all the confusion, Kamal has chosen to remain silent. “For him, it is like yet another movie bombing in the box office. He would now go and act in movies. Only our future is at stake,” said a party member, who is a businessman. Many of the senior leaders of the MNM, however, are still hopeful that Kamal will do the required course correction after finding out the reasons for the debacle.

Yet, the complete reliance on personal popularity, the absence of an ideology and the lack of clarity in key policy issues seem to be hurting Kamal and the MNM. “Kamal is a politician without an ideology and a clear roadmap,” said G. Gladston Xavier, who teaches at Loyola College in Chennai. “He has no political vision.”