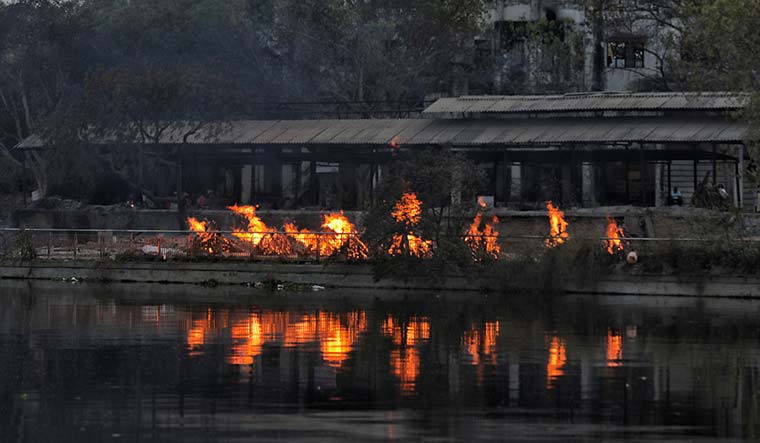 Reign of death: Pyres burn continuously at the Baikunth Dham in Lucknow as the city faces an alarmingly growing number of Covid-19 deaths | Pawan Kumar

A Covid wave of monstrous proportions is sweeping through Uttar Pradesh, which had done a relatively sound job of managing the pandemic’s first onslaught. On April 1, the total number of Covid cases in the state was 6,19,783. The number rose to 6,76,739 on April 10, and to 9,42,511 on April 21. More alarming is the rise in the number of deaths per day—from 48 in the preceding 24 hours on April 10 to 187 on April 21. The districts bearing the greatest burden of these numbers are Lucknow, Prayagraj, Kanpur and Varanasi.

Stories of unbelievable suffering and neglect tumble out every day. One of them is from Dinesh Mehra, a garment exporter who had admitted his mother, Kiran, to T.S. Misra Medical College and Hospital in Lucknow on April 13. Kiran, 76, had tested positive on April 5 and the family had been treating her at home. On April 9, her blood sugar began to shoot up, while the sodium fell. She began hallucinating, prompting the family to admit her to the hospital.

At 4am on April 13, an ambulance picked her up. When the family called her at 10:30am, she said she still had not received breakfast—a dangerous delay for a diabetic.

The well-connected Mehra then made multiple calls, including to the sub-divisional magistrate of the area who personally went to check the situation in the hospital. At 1:38pm, Mehra received a picture of his mother with her first meal of the day.

The next day, there were no calls from the hospital and the family was unable to call her cell phone. Persistent inquiries revealed that the phone and its charger had been stolen. Mehra immediately arranged for a replacement phone to be sent in. Yet, for the next two days, there was again silence.

“It took me 250-300 calls to be told that she had gone missing from the hospital,” said Mehra. “A constable from the Sarojini Nagar police station went to check on her whereabouts and found her. One version was that she had shifted to bed number 77 from her allotted bed number 76. Another was that she had been found locked in a room. She had not received any medication in the meantime. She was then shifted to the intensive care unit as the doctors said she was unconscious. A few hours later, she was put on a ventilator, and at 1:30am on April 19, we got a call saying she was no more. We had sent her to the hospital only because we could not manage her sugar levels. Had we had any inkling of what would happen, we never would have.”

Mehra is thinking of lodging a complaint against the hospital. He also alleges that his mother’s clothes and the ring and earrings she was wearing were stolen, as were the clothes the family had packed for her. After the cremation, when he went to collect the remains, he found that her lower denture was missing. “They even took away her gold tooth,” Mehra said. 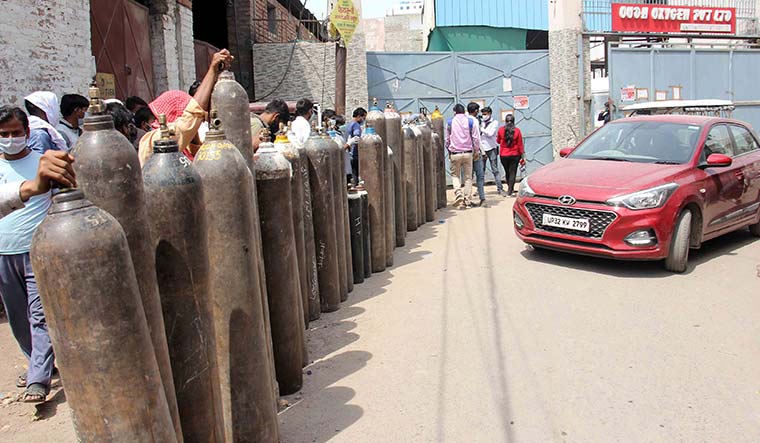 Fighting for life: People waiting for refills outside an oxygen plant in Lucknow | Pawan Kumar

The hospital did not respond to queries, but one of the many social media posts complaining about gross negligence on its part elicited this response: “Our hospital is currently overwhelmed with the number of patients the government is sending. More than 40 per cent of the staff... have fallen ill; some have absconded; because of which there is an extreme shortage of manpower.... We have asked the government to provide help with this, as we were not given any time for preparation.” The hospital was a designated Covid facility even during the first wave of the pandemic.

The list of Covid care institutions in Lucknow has been growing, but patients are still struggling to find hospital beds. Pharmacies have run out of basic pills like paracetamol. Oxygen concentrators, which one could buy for less than Rs40,000 earlier, now cost Rs90,000. Hospitals have started to request patients to leave as oxygen supplies run low.

Shuchin Bajaj, founder director of Ujala Cygnus hospitals, three of which are located in UP, said, “In the first wave, because of the lockdown, transmission slowed down and hospitals were not under so much pressure. The pressure was on the supply of masks and personal protective equipment. This time, the manufacturing aspect is well taken care of, but there is shortage of medicines and plasma. Treatment protocols are also not clear.”

An oft-repeated complaint is about the centralised allocation of beds through the integrated ‘Covid control and command centre’. In September 2020, the ministry of health and family welfare recognised the centre’s functioning as part of Covid-19 best practices. One of the centre’s tasks is to facilitate prompt referral of patients to the appropriate level of dedicated Covid facilities. This means that patients cannot go to any hospital that has available beds; they have to wait for the centre to allocate beds.

Another step (now done away with) added to the process was getting a letter from the chief medical officer before an admission. But even after a letter was obtained and an allocation made, the actual wait for a hospital bed could stretch for days. On April 20, the state’s Human Rights Commission directed the state government to do away with the requirement of letters and permit hospital admissions through the simple process of having every hospital display a real time list of available beds.

No number of ‘connections’ can be of help in the prevailing situation. Veteran journalist Tavishi Srivastava started experiencing severe breathing difficulties after four days of being ill. She made desperate phone calls to other senior mediapersons, telling them in laboured breath: “Save me. I will die if I don’t get to a hospital.” It took more than six hours to get her to a hospital. Four hours later, on April 19, she died. Chief Minister Yogi Adityanath, who had also tested positive and was in isolation, issued a note of condolence a day later.

“The system has crashed,” said Sunit Kumar Saxena, a doctor who retired from the state’s health services in 2019. “It was known that cases would increase after Holi. The infrastructure that was created for the first wave should have been enhanced, but it was dismantled. IAS officers in UP believe that they know everything and routinely disrespect doctors. And no one blames them. Even the people blame doctors if beds are not available. But it is not the doctors who create beds, or ensure oxygen supply or ventilators.”

Sometime around Holi (March 29), private labs in Lucknow stopped Covid tests. Several labs confirmed this to THE WEEK, even though the government said that there were no such orders. Low testing could have masked the number of new infections in the immediate follow-up to the festival.

“[Private labs] were handling a chunk of the samples, but for some reason they stopped testing and this added to our load,” said Jyotsna Agarwal, head of the department of microbiology at Ram Manohar Lohia Institute of Medical Sciences in Lucknow. “From January to March, we would test between 1,000 and 2,500 samples a day. Now we deal with 9,000 to 10,000 samples from Lucknow and eight other districts. Positivity rates have increased by 30-40 per cent. So, we cannot do pooled testing any more. One cycle of testing of around 100 samples takes anywhere between four to six hours. And the number of samples that keep coming in never seems to stop.”

‘Unbearable’ was the word used by a nodal officer at a Covid care facility in Lucknow to describe the work pressure. “There is no planning and execution for a triage area; key medicines like Remdesivir are unavailable; and facilities for disposal of biomedical waste are dismal,” he said. “We have to report bed availability, staff information, oxygen status and admitted/discharged/death status through various forms at different intervals during the day. For every death, forms have to be filled and submitted to the authorities concerned within two to six hours. We also need to attend meetings in person or through videoconferencing. We cannot switch off our phones; VIPs make calls throughout the day. With no time for rest or sleep, stress levels are high.”

Dr Girija Shankar Bajpai, an additional director of the state’s health department who oversees Covid-19 management in Lucknow, said the challenges were changing by the day. “But the biggest challenge remains the availability of ICU beds and the associated logistics. To increase capacity is another challenge and even the private sector is struggling.” Bajpai was in charge of the health facilities during the Prayagraj Kumbh in 2019 and was assigned the new role on April 18 as the situation in Lucknow began to worsen.

Sidharth Nath Singh, who was minister of health before he was given other portfolios, said the chief minister was monitoring and “elevating” the state’s health infrastructure. “The second wave’s impact is quite serious and unprecedented,” he said. “But our government is committed to securing the lives and livelihoods of the 24 crore people of UP, and is tirelessly working for them.”

The effectiveness of the government’s work will only be clear once this second wave recedes, revealing the true magnitude of the havoc it has caused. For now, UP has no time to lose if it wants to save itself from being swept away by this surge.