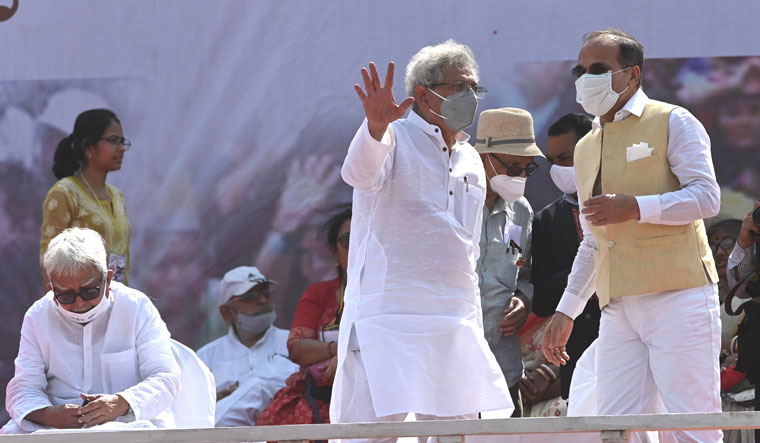 If the first few phases are any indication, the West Bengal elections are fast becoming a two-horse race. The finish line might be weeks away, but the manner in which the BJP has matched the Trinamool’s cadre strength on the ground—especially in Nandigram—has sowed seeds of doubt in the minds of some leaders of the ruling party. In fact, Mamata’s strategists had to take to social media to quell rumours that she would be contesting from another seat in the later phases. They assured voters that Mamata would win Nandigram. “We had anticipated that (rumours),” said a senior Trinamool MP. “They would play psychological games during the elections. It was done to hit the morale of our workers.”

BJP insiders said that the Nandigram model—fighting fire with fire—would be followed across the state in the next phases. Said state BJP vice president Biswapriya Roychowdhury: “This model is nothing but a method of resistance. We will not let the TMC rig the elections. In every booth, our men and women would guard the voters and keep an eye on the TMC polling agents.”

The next two phases would see polling in two districts of North Bengal, and Hooghly, Howrah and South 24 Parganas in South Bengal. While the BJP has done well in the north, it will be looking to breach Mamata’s bastion in the south. The party has lined up a series of rallies by Prime Minister Narendra Modi and roadshows by Home Minister Amit Shah.

Curiously, the third horse in the race—the united front of the left, the Congress and the Indian Secular Front—seems to be glancing at another race on another track: The Kerala elections. While the ISF is a new entrant and is contesting in only 31 seats, the two established parties have been defensive in their approach. There has been a sudden inertness in the campaign. Except for former state minister Sushanta Ghosh, in West Midnapore, no left or Congress candidate was on the ground against the Trinamool.

That senior Congress leaders Rahul Gandhi and Priyanka Gandhi Vadra have not visited Bengal has led to speculation that the party high command wants to avoid taking on Mamata as there could be a larger coalition against Modi at the Centre.

“It is well known that if the Congress and the left campaign extensively, the anti-BJP vote would be divided,” said a senior BJP leader. “They can eat into the Muslim votes as a key Muslim cleric (Abbas Siddiqui) is with them. Maybe that is why none of the Congress leaders came. However, it is unfortunate for a party that always took elections seriously. Regardless of what Congress leaders in Bengal say, their high command is [not as against] Mamata.”

The left, on the other hand, has never relied on outside leaders to campaign in state elections. However, many of its experienced leaders are old and ailing, and have been limited by the pandemic. The central leaders, meanwhile, have focused on fighting the Congress in Kerala; the Communist Party of India (Marxist) is in power there.

There is also a crack in the broad leftist alliance as the Communist Party of India (Marxist-Leninist), which was part of the left front in the recent Bihar elections, opposed the idea of going up against Mamata to “help the BJP”. Apparently, the CPI(ML) refused to buy the argument that Mamata had reached a compromise with the BJP in Delhi.

The Congress and the left seem to have accepted that Mamata is a key leader in the fight against Modi in the 2024 Lok Sabha elections, and against numerous controversial legislations such as the citizenship act and the farm laws. The Trinamool chief had supported the Congress and the left during the farmers’ protests, and had even sent her party leaders to the Haryana-Delhi border.

Given this, it was difficult for the central leaders of both the Congress and the left to campaign against Mamata wholeheartedly.

Both parties have, however, played down the soft division between their state and central committees. “When the united front was formed, comrade (CPI(M) general secretary) Sitaram Yechury was present at the Brigade Parade Ground in Kolkata,” said a CPI(M) state committee leader. “If needed, he would obviously come.”

As for the Congress, the only tall non-Bengali leader at the Brigade Parade Ground was Chhattisgrah Chief Minister Bhupesh Baghel.

However, Congress MP Pradip Bhattacharya said that, given the allocation of seats within the alliance, his party was not a big force in the first three phases. “We are strong contenders in Murshidabad, Malda and Dinajpur. They will go to the polls later,” Bhattacharya told THE WEEK. “Perhaps that is why the central leadership has stayed away so far.”

When asked whether the Gandhis would campaign, he said, “We have received no news so far. If they decide to come, we would obviously be informed.”

In 2016, when the BJP was not a force in Bengal, left leaders from Kerala and Delhi had been part of rallies against Mamata despite concurrent elections in Kerala. Rahul had shared a dais with senior left leader and former chief minister Buddhadeb Bhattacharya in Kolkata.

Much water has flowed under the Howrah Bridge since. In the past few years, Mamata has made attempts to mend her relationship with central CPI(M) leaders. She even held meetings with senior left leader and Kerala Chief Minister Pinarayi Vijayan in Delhi, and invited him to join her fight against the BJP.

The gesture seems to have paid off, but at the cost of a third front, said observers. Though some supporters are holding out hope that senior communist leaders will join the campaign now that the Kerala elections are over (April 6), some others said that it would be too late; the electorate would be completely polarised between the Trinamool and the BJP.

Bhattacharya disagreed. He said there was an undercurrent in favour of the united front alliance. “People are underestimating our alliance,” he said. “I think we will be a factor in many seats, primarily in north Bengal.”

He did not comment whether the central leadership had felt the same undercurrent.