In his fourth term as CM, Chouhan has turned aggressive—in governance and politics 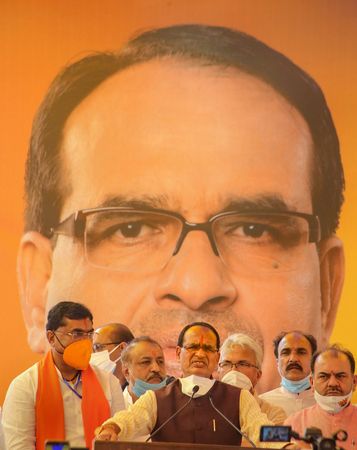 Films have great recall value, and politicians of all hues are well-aware of that.

Madhya Pradesh Chief Minister Shivraj Singh Chouhan’s favourite punch line is a take on the 2017 Salman Khan-starrer Tiger Zinda Hai: “Tiger abhi zinda hai (Tiger is still alive)”. The first time he used it was in December 2018 to reassure supporters while moving out of the Chief Minister’s House, after a defeat in the assembly polls had ended his 13-year rule. In an interesting turn of events, the line was repeated by Rajya Sabha member Jyotiraditya Scindia, whose switch to the BJP from the Congress along with a clutch of MLAs in March 2020 paved way for Chouhan’s return as chief minister.

Chouhan’s most recent use of the punch line, accompanied by animated gestures and expression, happened at a public meeting in Bhopal on March 9, a fortnight before he completed one year in his new term as chief minister. “Tiger abhi zinda hai aur shikaar pe nikla hai (Tiger is still alive and is out on a hunt now),” he said, in an apparent warning to the mafia and antisocial elements.

Whether it had the desired effect on criminals is not known, but it did burnish the new avatar that Chouhan had been painstakingly constructing for the past year. Political analysts, adversaries and a growing section of common people agree that Chouhan, in his fourth term, is a changed chief minister. Moving away from his moderate and conciliatory image, he has become aggressive in both governance and attitude.

Chouhan’s oratory and people skills are well-known, and the BJP’s thumping victory in the bypolls in November 2020 highlighted his continuing popularity. But during the past year, especially after the bypolls, Chouhan’s public speeches have become fiery—he has often threatened the mafia and antisocial elements, saying he would hang them upside down, destroy them and bury them.

In an exclusive interview with THE WEEK, Chouhan said that his attitude towards the mafia had been the same in his previous tenures, too, but agreed that he had become stricter because “middlemen and mafia were nurtured during the short Congress tenure. They have to be discouraged for the betterment of the state”.

On the other hand, his apparent hurry to pass the anti-love jihad law, his alleged bias against minorities during incidents of communal tensions, initiatives like changing Islamic names of cities and constituting a cow cabinet and getting an openly majoritarian MLA Rameshwar Sharma to become pro tem speaker are being cited as examples of his hardline tilt.

So much so that many people said that Chouhan was trying to emulate Uttar Pradesh Chief Minister Yogi Adityanath, a hindutva hardliner, in some ways. Chouhan, however, dismissed it saying that he had a working style of his own.

Political commentator Manish Dixit said that Chouhan might be aware that this could be his last term as chief minister. He is, therefore, trying to pitch himself as a probable prime ministerial candidate, though publicly he asserts that he will not move out of state politics. “That is perhaps why he hastens to implement the pet schemes and themes of the Union government and the party high command,” said Dixit, “and is showing this hardline tilt in keeping with the current political demand.” He, however, adds that his public posturing has had little impact on governance, be it reining in the liquor and sand mafia, or tackling crimes against women.

Analyst Girija Shanker, however, said that Chouhan’s changed attitude had more to do with his need to ensure that there is no repeat of the 2018 defeat in 2023. “His personal ideology has always been clear as a typical BJP leader, but he kept governance separate from his ideology earlier,” said Shanker. The trigger for the change, he added, could be the national endorsement of the BJP’s right-wing politics in the 2019 Lok Sabha elections.

Also, his current tenure as chief minister is more of a gift, said senior political writer Rasheed Kidwai, rather than something he had earned, as in 2008 and 2013. “Naturally his choices are now curtailed. His dependency has increased owing to Scindia and related factors,” said Kidwai. “There are too many competitors with direct link to party bosses. Therefore, he is not as sure-footed as earlier.” Also, as the BJP has a long list of second-rung contenders for the prime minister’s post, Chouhan is no longer sure of what the future holds for him, added Kidwai.

Moreover, the RSS does not count him in the same league as Yogi Adityanath, said Kidwai. “His earlier image of a moderate leader, like Atal Bihari Vajpayee’s, is doing him no good as far as his future in politics goes,” he said. “So his aggressive public posturing and actions might be emerging out of these dilemmas.”

Entrepreneur Pawan Chhajed from Bhopal said that Chouhan is going with the current flow of politics to reinforce his party’s and his own support base as he is aware of its success. He is also aggressively pushing the development agenda, he said, which would be noticed by the common people.

Congress Rajya Sabha member Digvijaya Singh, however, said that Chouhan was always a hardliner. “You are mistaken if you say it is a new thing,” the former chief minister said. The only big change in Chouhan, he added, was that he had become very vindictive. Singh, however, did not elaborate on that point.

Congress media cell general secretary K.K. Mishra is clear that insecurity is driving Chouhan’s aggressiveness. “His old image of being a moderate leader has been demolished as he does not have a majority government now,” he said. “His opponents in the party are very active and that has put a lot of pressure on him. There are rumours that he might be replaced after the assembly polls in West Bengal and other states. The Uttarakhand instance (where the chief minister was changed over infighting) further gives credence to the theory.” Mishra, too, said that Chouhan’s dialogues have failed to make any impact on the mafia or governance. “Thus he goes on with this show of aggression,” he added, “but is hollow inside.”