With Mamata injured, her 5 trusted men will have a bigger role to play in campaigning 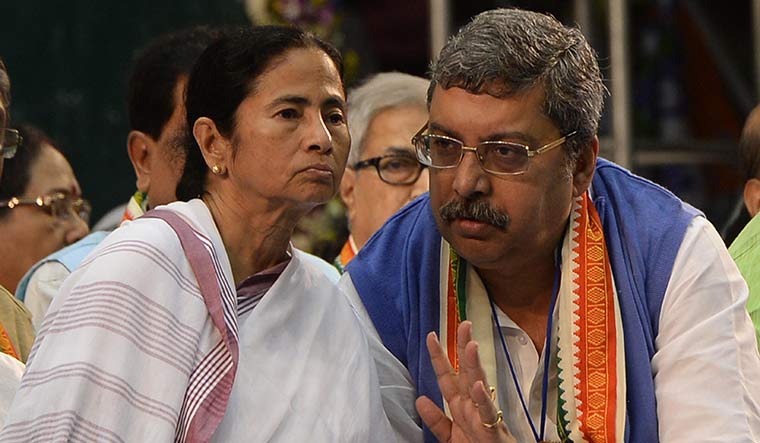 Mamata Banerjee was itching to head back into battle, but doctors at the state-run SSKM Hospital in Kolkata asked her to stay put for at least two more days. The chief minister had hurt her left leg and hip during her campaign in Nandigram on March 10.

Though there has been speculation on whether she fell or was pushed, the doctors were more concerned about Mamata’s low sodium levels. “For a diabetic and senior citizen, lowering of sodium in the blood is dangerous,” said a doctor at the hospital. “It might cause heart or kidney disease. If not treated, it might lead to heart failure.”

Mamata, however, soon hit the streets in a wheelchair.

Some senior Trinamool leaders had linked the Election Commission’s removal/transfer of senior police officers in the state to the “attack” on Mamata. Miffed, the commission asked poll observers to investigate. On March 14, based on their report, the commission pronounced it an accident and removed the district magistrate of East Midnapore. It also suspended some senior officials.

Mamata’s leg will need time to heal, which means that senior party leaders would have to take on additional responsibilities. While many veteran leaders have defected to the BJP, and more are expected to do so, the following five have stood by her and would be crucial to Mamata’s chances of re-election.

THE CALCUTTA High Court lawyer, who has advised Mamata on legal matters since 1984, has been entrusted with saving the party in Hooghly, Howrah and Bankura. If needed, he could also be used in his hometown of Asansol.

Kalyan is one of the few Trinamool leaders hyping Mamata’s Covid-19 response. “Look at other states and then see Bengal. We are safe because of Mamata Banerjee,” he said.

The Serampore MP has bitterly criticised those who have left his party for the BJP, including former cabinet minister Rajib Banerjee and former Mamata confidant Suvendu Adhikari. He said that these leaders used Mamata’s image to make their own political fortunes.

When the party’s internal study showed that it would fare poorly in western Bengal, especially in Bankura, Mamata gave him the responsibility of regaining lost ground. On his advice, the party changed most of its candidates in Bankura, Howrah and Hooghly.

For instance, Singur movement leader Rabindranath Bhattacharjee was denied a ticket this time. He promptly joined the BJP and got a ticket. “The BJP has taken all the dirt from our party,” said Kalyan. “In a sense, they have cleaned our party. We thank them.” He said he would ensure that the party wins in the seats (around 50) that he is in-charge of.

Kalyan has been a major player in the Trinamool’s court battles, including those linked to the Nandigram and Singur movements. About the cases he said he had always challenged the government of the day. “If needed, I will challenge this government as well,” he said. “I am happy that Mamata Banerjee has never done anything anti-people.”

He alleged that the BJP government had systematically destroyed the autonomy of the country’s institutions. “The most recent casualty is the Election Commission,” he said. 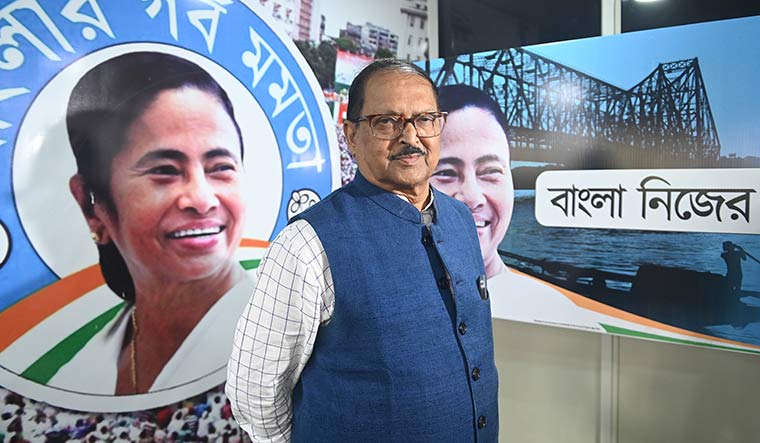 AFTER DECIDING to contest from Nandigram, the first person Mamata turned to was Subrata Mukherjee. She sent her political mentor to the constituency to assess the ground situation. Mamata’s historic win in 2011 had its origins in Singur, Nandigram and Junglemahal. In the 2019 Lok Sabha elections, though, the BJP gained massively in Singur and Junglemahal. Even in East Midnapore, where Nandigram lies, the BJP’s rise has been sharp.

Mamata would need Mukherjee’s experience to offset any saffron momentum. The 75-year-old, who will contest from Kolkata’s posh Ballygunge, will campaign in the 11 seats in Kolkata and 31 seats in South 24 Parganas. He will also monitor the party’s organisation in Nandigram and devise ways to checkmate BJP candidate Suvendu Adhikari.

The former Kolkata mayor said this could be the first Bengal elections where a section of the people might vote for religion. “I have been participating in elections since 1971, but I have never seen such a situation,” he said. “Today, the politics of hindutva is at its peak in Bengal. Religious sentiment is overriding the model of development.”

But did the Trinamool not polarise Muslim votes in the past? Mukherjee disagreed. “Muslims are coming to us in large numbers because of Hindu polarisation. We need to give them political shelter,” he said.

Mukherjee had lost the 2019 Lok Sabha election from Bankura, and has decided to return to his old Ballygunge seat. “If I remain fit, I will never quit politics. I will continuously work for the people,” he said.

In 1972, as a 27 year old, Mukherjee had become information and broadcasting minister in Siddhartha Shankar Ray’s government (the youngest cabinet minister in Bengal history) and was also an aide of Congress stalwart Priya Ranjan Dasmunsi. It was Mukherjee who told Dasmunsi about a young firebrand named Mamata. Dasmunsi then helped her get a ticket in the 1984 state elections, in which she beat the Communist Party of India (Marxist) veteran Somnath Chatterjee.

Once, as a Congress leader, Mukherjee used to bring prime ministers to campaign in Bengal. “But today, we have to face the prime minister (Narendra Modi) and home minister (Amit Shah) as challengers,” he said. “Many other Central ministers, along with big leaders of other regions, are flocking the state. [It is a] very tough situation this time, but we hope to emerge victorious.” 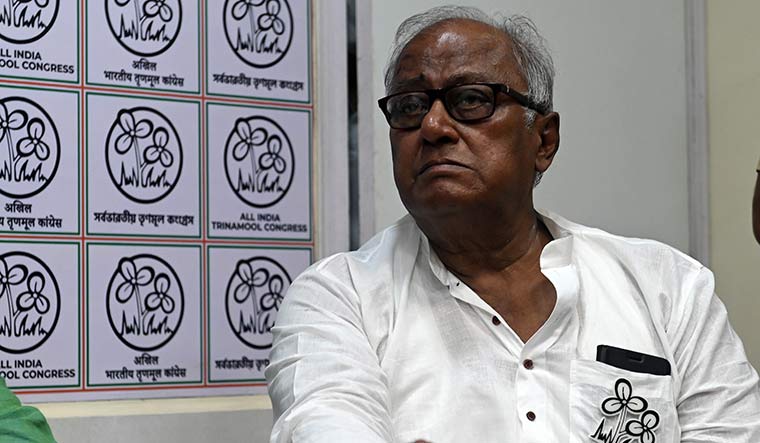 PARLIAMENTARIAN of the year in 2019, Saugata Roy has been a tough critic of the Modi government in the Lok Sabha. Regardless, his peers respect him for his argument, and his knowledge of the law and the Constitution. Many in the Trinamool privately say that only Roy should lead the party in Parliament.

But Roy is a powerful man in Bengal, too, and Mamata knows that. He is her crisis manager. He was the one tasked with placating Adhikari before he quit following a tussle with her nephew Abhishek. Though Roy failed to stop him, he did prevent a few others from jumping ship.

The Dum Dum MP will play a crucial role in North 24 Parganas, the state’s biggest district with 33 seats. The political winds in three subdivisions—Barrackpore, Bangaon and Bidhannagar—favour the BJP. While the Barrackpore subdivision is populated by many non-Bengalis, the Bangaon constituency has a large number of refugees known as Matuas. The BJP is eyeing this community; the party had won the Bangaon seat in 2019. In Barrackpore, too, Trinamool defector Arjun Singh had swung the votes in the BJP’s favour. In Bidhannagar, some Trinamool defectors have been extolling Modi’s successes. Roy, who will also handle his party’s publicity drive in Kolkata, would have to play a crucial role in these areas. “I know there is a polarisation attempt by Modi and Amit Shah. But that would not work in Bengal,” he said. 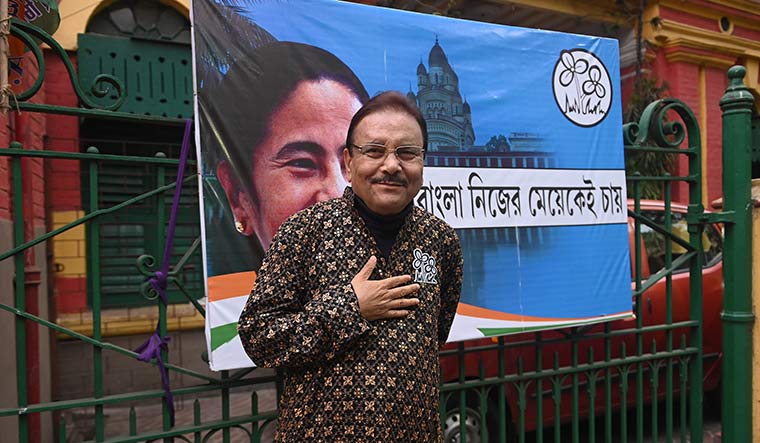 HE IS CONTROVERSIAL, colourful and tough, and has remained by Mamata’s side during troubling times. Many rated him highly as state transport minister, before he got embroiled in the Saradha chit fund scam in 2014.

This time, Mitra will contest from Kamarhati, near Kolkata, but he will also be used in places where the BJP is strong, like Barrackpore, Bangaon and Salt Lake. Given his influence in Kolkata, Mitra is going to play a major role in the city’s 11 seats. The Trinamool is banking on him to regain lost ground in Bhabanipur, Tollyganj and Rashbehari.

Even as he tries to do that, he also has to contend with the Enforcement Directorate; the agency recently called him in for the chit fund case. “I will find time to meet them even during this busy time,” he said. “I have always helped them [with] the case in the past.”

Mitra was in jail for two years, but continued as minister during that time. He also contested elections from jail in 2016, but lost. Out on bail, he contested the 2019 byelection from Bhatpara, which he again lost. But wins and losses are part of life, he said, adding that Mamata will remain invincible despite the BJP’s best efforts. “I will only tell the BJP that it should not overlook us. We are connected to the people, and that would always remain our plus [point],” he said.

After Mamata, he is the party’s most popular face on social media, and he has already sung a theme song for his party. He has also claimed that he will work to defeat Singh in Barrackpore, and deny the BJP a single seat in Kolkata. 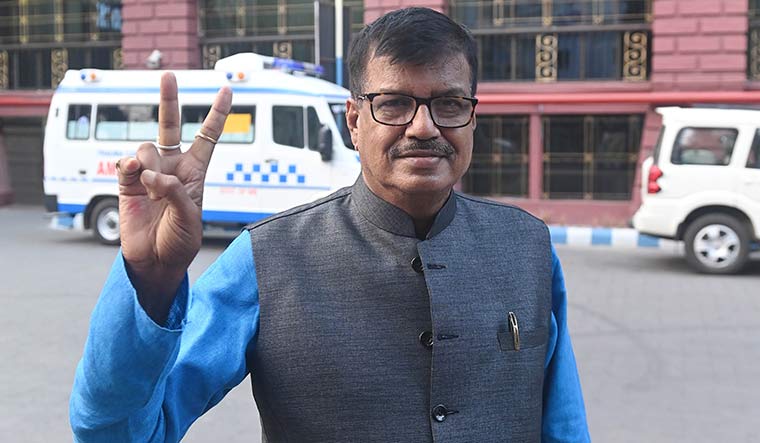 FIVE YEARS AGO, Ghosh had delivered north Bengal to Mamata. The party won close to 30 of 54 seats there; the region had been the stronghold of the left and the Congress. In return, she had made him north Bengal development minister.

In the 2019 Lok Sabha elections, however, the Trinamool faltered. The BJP won seven of the eight seats in north Bengal; the Trinamool got none.

Ghosh, however, remains positive. “The BJP has collapsed in the past two years,” he said. “Price rise, [especially of] gas cylinders, would go against them.”

He added that, organisationally, his party had regained lost ground. It could regain the support of the Gorkhas with both Bimal Gurung and his rivals supporting Mamata. “Also, in the plains, the people have understood the BJP’s game,” he said. “The seven MPs are of no use. They have not been able to bring any project to north Bengal.”

Ghosh, who will contest from Natabari in Cooch Behar, said he was travelling extensively in north Bengal. “If needed I will go to all eight districts. We will get a different result this time,” he said.

Ghosh said that the BJP had won north Bengal because the left’s votes had moved to the right. “The left had a vote share of 38 per cent in north Bengal, which completely went to the BJP during the Lok Sabha elections,” he said. “They are returning to the left and to our party as well.”

Calling this election a battle of survival for everyone, Ghosh said that the left’s revival would ensure Trinamool’s victory in north Bengal. “The left would completely cease to exist [if it does not win], and so it is trying to regain its votes. Our old votes have also come back thanks to the inefficiency of BJP MPs.”