My biggest mistake was bringing Mamata to Nandigram 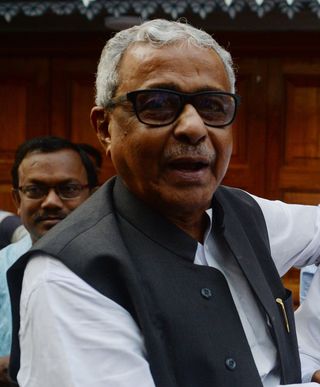 Sisir Adhikari, who led Nandigram movement against the left front government in West Bengal, has been the undisputed leader of the Trinamool Congress in East Midnapore district. In the past few months, two of his three sons have left the party. Suvendu, who had played a key role in the grassroots agitation in Nandigram, joined the BJP last December, and his brother Soumendu followed suit early this year. Suvendu will contest against Chief Minister Mamata Banerjee in the assembly polls.

Dibyendu, the third son and MP from Haldia, remains in the Trinamool with his father. A three-time MP and former Union minister, Sisir Adhikari spoke to THE WEEK about how the changes have affected him and his party. Excerpts from the exclusive interview:

Q/ How will the Trinamool fare in your district this time?

A/ The BJP will do splendidly. My party will not do well.

Q/ Can you cite the reasons, since you are the party’s founder in East Midnapore?

A/ Yes, I was the founder. But my party leaders pretend that there are people more senior than me.

A/ My two sons went to the BJP because they were forced to. They would not have gone otherwise. I have not spoken about why they had to leave the party. The way they attacked me and my family is beyond comprehension. I cannot accept that.

Q/ Mamata is going to fight
Suvendu in Nandigram.

A/ It’s better to not talk about her. She would get an answer for what she has done. Suvendu will win.

A/ Of course. And mark my words: his victory margin would be beyond your imagination.

Q/ What are the Trinamool’s prospects outside Midnapore?

A/ The picture is clear everywhere. People don’t trust this party any more. Its policies have failed. I never thought it would happen.

Q/ Has there been any development in Nandigram in the past 10 years?

A/ Whatever development happened in Nandigram is because of Suvendu. Roads have improved, and new schools and colleges have been set up. Electricity has come to villages. Suvendu did all that.

Q/ But the place deserves much more.

A/ We need better connectivity and good education infrastructure. Being close to sea, we demanded a port, which we have not got.

Q/ But you have for long been fighting for a port at Tajpur?

A/ Since April 2010. All these years, I repeatedly asked Mamata to lobby with the Centre for the port.

Q/ Do you feel the state has had to pay a heavy price because it has been on collision course with the Centre?

A/ Every educated person will say that, yes. Just a month ago, the prime minister inaugurated a project here in Haldia. Around 15,000 people would get jobs because of that. The [Tajpur] port would have also generated many jobs.

Q/ So you feel the port project did not materialise because of the chief minister.

A/ Of course. It was her biggest blunder. In fact, I apologise to my voters for not keeping the promise I had made.

Q/ In this context, do you feel that the Nandigram movement was a mistake?

A/ The biggest mistake in the Nandigram movement was that I brought Mamata into it. She reaped the rewards and then abandoned the people here. I had to pay a heavy price for that. My sons are also answerable to the people. Even if she had not come, I would have won the battle in Nandigram against the left front. I gave her an opportunity then, and today she and her partymen badmouth me and my family.