Tiger in a tight spot 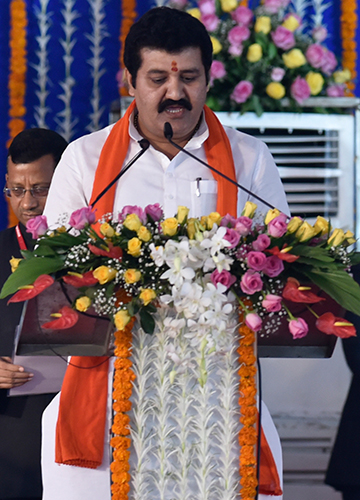 TOWARDS THE END of November 2019, as he was finalising the names for his cabinet, Maharashtra Chief Minister Uddhav Thackeray received a letter from senior Shiv Sena leaders from Vidarbha. They urged him not to pick Sanjay Rathod, a leader from the region’s Banjara community. Rathod had been minister of state in the Devendra Fadnavis government, and his performance was nothing to boast about, they wrote. Had Thackeray honoured the letter, signed by two MPs and three legislators, he would not have had to force Sanjay Rathod to resign as forest minister. Rathod, whose name has been linked to the death of 22-year-old Pooja Chavan, resigned on February 28, a day before the state legislature’s budget session began. The opposition, led by the BJP, had threatened to disrupt the session if Rathod did not resign.

Chavan is also from the Banjara community and hails from Parli Vaijnath in Beed district; she died after she reportedly fell from the balcony of her Pune apartment at around midnight on February 7. She had shifted to Pune to learn “English speaking”, and was active on social media. The police have registered an accidental death report. Initially, it was suggested that she had died by suicide as she was suffering from psoriasis. Later though, nearly a dozen audio clips of telephone conversations between a person named Arun and an unidentified man surfaced. The unidentified man’s voice is allegedly similar to that of Rathod.

The first to take up Chavan’s case was state BJP vice president Chitra Wagh. She briefed the media almost every alternate day about the various audio clips that were doing the rounds, even as Rathod went into hiding. She also claimed that one Pooja Arun Rathod had undergone abortion at a hospital in Yavatmal district, and that Pooja Chavan and Pooja Arun Rathod were the same person. She said that the procedure was done by a doctor who was not on duty that day. This doctor has gone on leave. And, Arun Rathod, who is said to be Chavan’s friend, has gone missing. “Minister Sanjay Rathod is a murderer,” said Wagh, who left the NCP for the BJP ahead of the 2019 assembly elections. “On the day of Pooja’s death, there had been 45 missed calls from Sanjay Rathod to Pooja on her Samsung Galaxy S10 Lite. He should be booked for culpable homicide.”

Even as the BJP was gunning for Rathod’s resignation, the former minister was “unreachable” even to his party colleagues. He surfaced 16 days later, on February 23, at the temple of Goddess Poharadevi in Washim district. Poharadevi is the most revered goddess of the Banjara community. Rathod and his wife offered prayers at the temple. They were accompanied by thousands of supporters, defying the orders of the chief minister who had urged people to strictly maintain social distancing in view of the second wave of Covid-19. At the temple, Rathod told the media that he was a victim of dirty politics and media trial and that he had nothing to do with Chavan’s death. He was later told to meet the chief minister at his official residence—Varsha—in Mumbai. It was at this meeting on February 24 that Rathod was asked to resign.

The Shiv Sena was divided over seeking his resignation. While a section of Sena leaders who backed Rathod thought that asking him to resign would amount to admission of guilt, some senior party leaders thought that the controversy had caused immense damage to the party’s image, and that the chief minister should immediately ask for his resignation. Senior leaders were of the view that if the police gave a clean chit to Rathod, he could be re-inducted into the cabinet.

Rathod, however, had hoped that he would not be asked to resign, as had happened in the case of Social Justice Minister Dhananjay Munde. A few weeks ago, Munde had been accused of sexual exploitation and harassment by a woman. However, he had written a detailed Facebook post explaining his stand on the very day the allegations were made, and the woman later withdrew her complaint. In Rathod’s case, Chavan died under mysterious circumstances, and Rathod went incommunicado for more than two weeks. He is yet to offer a detailed explanation.

Politically, Rathod’s resignation is a major win for the BJP. Party legislator Atul Bhatkhalkar said Rathod’s resignation was “too little, too late”. “The crucial evidence in the case has been destroyed,” said Bhatkhalkar, who is in charge of the Mumbai BJP. “The chief minister, who claims to be cultured, should ideally have asked Rathod to resign immediately and asked the police to register an FIR and start the inquiry.”

Wagh, however, thanked the chief minister for asking Rathod to resign. “Resignation is the first step,” she said. “Charges of culpable homicide have to be pressed (against Rathod). The challenge ahead is to take the case to its logical end in the court of law, and we will do it.”

The budget session will most likely be stormy, and Shiv Sena’s allies in the government—the Congress and the NCP—are unlikely to come to its aid. The Shiv Sena, therefore, has decided to deal with the controversy head-on. It is circulating a letter written by Chavan’s parents to Thackeray, wherein they urge the chief minister to bring an end to their daughter’s defamation. “We have lost our daughter, but do not make anyone a scapegoat just because of suspicion,” read the letter. “We never demanded Rathod’s resignation. There should be a complete inquiry, and if Rathod or anyone is found guilty then strict action should be taken.”

Will it be enough to quieten the clamour though?