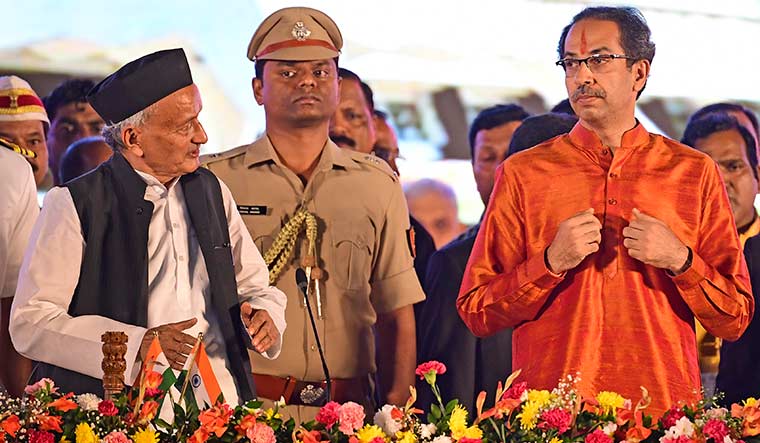 ON FEBRUARY 11, Maharashtra Governor B.S. Koshyari was forced to deboard the official aircraft after the state government refused to grant him permission to use it. He then took a commercial flight. The governor was bound for Dehradun and then on to Mussoorie to preside over the valedictory function of the 122nd induction training programme for promotee IAS officers at the Lal Bahadur Shastri National Academy of Administration.

The latest episode in the ongoing feud between the Maha Vikas Aghadi (MVA) government led by Chief Minister Uddhav Thackeray and the Raj Bhavan has highlighted the complete breakdown in communication between the two sides. Usually, the Raj Bhavan applies to the general administration department for using the official aircraft; permission is granted immediately, after routine paperwork.

In this case, the Raj Bhavan had applied on February 2, but the chief minister’s office (CMO) did not respond. The CMO said it had informed the Raj Bhavan on February 10 that permission had not yet been granted. “The Raj Bhavan secretariat should have confirmed beforehand whether permission was granted or not. The honourable governor got delayed because of this. The state government is not at fault,” said a statement issued by the CMO. It also said that Uddhav was clear that the concerned official in the Raj Bhavan was to blame.

Former chief minister Devendra Fadnavis said the incident was an insult to the office of the governor. “It happened only because of the government’s ego, and it is a dark moment in the state’s history,” said Fadnavis. “The governor is the supreme authority of the state and it was completely wrong to make him deboard the flight.”

It is reliably learnt that the Raj Bhavan tried to get the permission till the last minute, but was told that the governor would have to speak directly to the chief minister. Koshyari refused, which is a clear sign that he and Uddhav are not on talking terms. “It is not the case of a cold war, there is an open war between the governor and the government,” said Shiv Sena MP Sanjay Raut, who is also the executive editor of the party mouthpiece Saamna. “The governor is acting like the BJP’s pointsman to create problems for the government.”

The Shiv Sena has long accused Koshyari of acting more like a BJP leader than a governor. The latest in its long list of grievances is that the governor has been sitting on the list of 12 nominees to the legislative council for two months. The governor’s nominees are usually representatives from diverse fields such as arts, literature and social work. Traditionally, the cabinet proposes the names and the governor clears it. But Koshyari has refused to honour this tradition.

It all began when Koshyari administered the oath of office to Fadnavis and Ajit Pawar in a hush-hush early morning ceremony in November 2019, without ascertaining whether they had the numbers to form the government. He then refused to clear Uddhav’s nomination to the legislative council from the governor’s quota, saying the chief minister should get himself elected. Soon after this, Uddhav stayed away from a meeting called by the governor to discuss the response to Covid-19. The ties soured further when Koshyari wrote to Uddhav about reopening temples in Maharashtra. The chief minister wrote back saying he did not need a certificate of hindutva from Koshyari.

Political analyst Ravikiran Deshmukh said the controversy over the aircraft was completely uncalled for. “It sets a very bad precedent,” said Deshmukh, who had served as media adviser to the Fadnavis government. “The government could have informed the Raj Bhavan well in advance about the nonavailability of the aircraft. Under such circumstances, a chartered flight would have been made available. The acrimonious relationship between the two highest offices of the state is not a sign of a healthy democracy.”

Social activist Vishwambhar Choudhary said the state should have provided the aircraft irrespective of its differences with the governor. “A certain decorum has to be maintained when you are dealing with the governor, notwithstanding the differences you have with the person,” he said. “This has certainly damaged Maharashtra’s image.”

Meanwhile, the Congress, which is a member of the ruling alliance, too, has voiced its discontent against the governor. Newly appointed state Congress president Nana Patole said the party was thinking about moving court against the governor for his refusal to accept the nominees to the legislative council. Patole, who was the speaker of the legislative assembly till recently, said he had set up committees of both houses, assuming that the governor would clear the nominations. “However, in the absence of 12 members, the committees may not become functional,” said Patole. “As the governor has failed to implement the recommendation of the cabinet, we feel approaching the High Court will be the best option.”