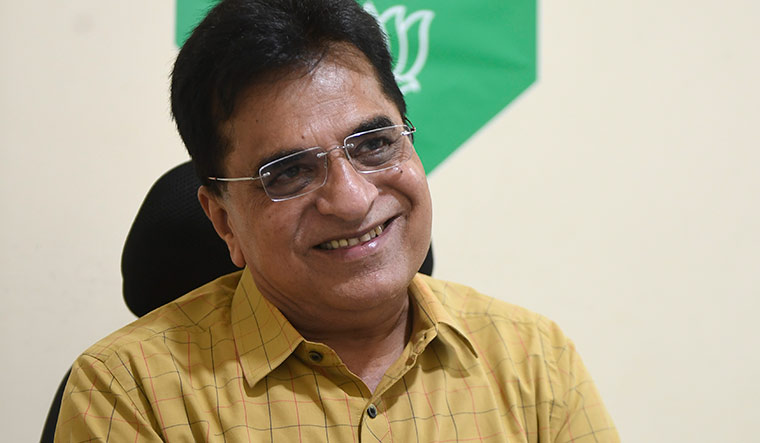 On January 11, former MP and senior BJP leader Kirit Somaiya filed a complaint with the Election Commission of India against Maharashtra Chief Minister Uddhav Thackeray. Somaiya alleged that Thackeray had concealed assets when he filed his affidavit ahead of the legislative council elections in May 2020. He said that the chief minister did not disclose 19 bungalows—valued at Rs5.29 crore—owned by his wife, Rashmi, and Shiv Sena legislator Ravindra Waikar’s wife, Manisha.

The complaint against Thackeray caused tremors in the state’s political establishment. Somaiya did what no other BJP leader had done—train his guns on the chief minister. For Somaiya, it was yet another salvo in his fight against corruption. Interestingly, all his targets so far have been Shiv Sena leaders and his fight is starting to look like a crusade against the Shiv Sena.

Somaiya exposed irregularities in the management of Covid-19 by the Brihanmumbai Municipal Corporation (BMC), which is controlled by the Shiv Sena. Somaiya then claimed that the BMC had bought land worth Rs2.6 crore in Dahisar for Rs354 crore. He also alleged that the BMC’s Rs3,000-crore plan to construct a 5,000-bed Covid-19 hospital in Mulund was a scam. He also went after Mumbai Mayor Kishori Pednekar, alleging that she had grabbed and occupied Slum Rehabilitation Authority (SRA) land. “The mayor is running her business, Kish Corporate Services, from the ground floor of a Gomata Janata SRA Society flat,”he said. “This land was not allotted to her or her family members and is meant to serve as a social welfare centre.”In his complaint to Municipal Commissioner I.S. Chahal, Somaiya said that the mayor had given BMC contracts to her family members.

Next, Somaiya turned his attention to Transport Minister Anil Parab. He alleged that Parab had grabbed land from the Maharashtra Housing and Area Development Authority (MHADA). The MHADA, said Somaiya, had issued a notice to demolish an illegal construction by the minister. However, Parab dismissed Somaiya’s claim. “This is political vendetta,”he said. “I don’t know why the MHADA issued the order when I don’t own the property.”

Somaiya found irregularities in residential buildings constructed by Shiv Sena leader and MLA Pratap Sarnaik’s Vihang Group. (Sarnaik was raided by the Enforcement Directorate in November 2020.) “Vihang Group constructed Vihang Garden Society in 2008,”he said. “Two of the buildings there are illegal; some 114 flat owners cannot sell their flats, and one of the buildings does not even have an occupation certificate,”said Somaiya. He further alleged that Sarnaik and his partner Mohit Agarwal, founders of Vihang Astha Housing LLP, have used 0100 crore from the National Spot Exchange Limited scam. “When I filed the petition in Jignesh Shah’s NSEL scam, I came to know that Sarnaik was one of the beneficiaries,”said Somaiya. “Mohit Agarwal, who had been arrested earlier, had transferred 0100 crore to Vihang Astha Housing LLP. With this money, they bought land in Titwala. Now, ED has taken possession of the land and the dealings are being investigated.”

But, the biggest revelation so far has been the allegation against Thackeray. In 2014, Rashmi and Manisha purchased land in Korlai village from architect Anvay Naik. It was for Naik’s suicide that Republic TV editor-in-chief Arnab Goswami was charged with abetment, as his firm had failed to pay money owed to Naik. Somaiya said that he got to know about the deal as his relatives live a few kilometres from Korlai. “The land is just 100m from the coastline,”he said. “There are 30 plots and 19 bungalows; the total [built-up area] is 23,000sqft. After I disclosed it [on November 11], Rashmi Thackeray paid house tax for six years, the next day.”

The chief minister disclosed only the land and not the bungalows, he added. “The Supreme Court, in such cases, have asked investigation agencies to take strict action,”he said. “There are precedents where the election of the representative in question was made invalid. The chief electoral officer of Maharashtra has assured me that he will go into the complaint in detail.”

Somaiya, a chartered accountant, said that he was not targeting the Shiv Sena. “Look at my record,”he said. “I have dug out cases against [former] Uttar Pradesh chief minister Mayawati, Rajasthan Chief Minister Ashok Gehlot and powerful [people] in Assam. My party has told me to expose corruption and I am doing that dutifully.”His efforts are going to be immensely helpful to the BJP in the BMC elections scheduled for February 2022. In 2017, too, Somaiya had gone all out against corruption in the BMC and earned the ire of Shiv Sena leadership. The party, which was in an alliance with the BJP, was so furious that it insisted that Somaiya, who was then an MP, not be given a Lok Sabha ticket in 2019. The BJP obliged. But, Somaiya’s exposé helped the BJP to increase its tally from 30 in 2012 to 82 in 2017, just two short of the Shiv Sena’s 84.

Harshal Pradhan, media adviser and close aide to Thackeray told THE WEEK that all Somaiya’s claims were baseless. “The Shiv Sena does not take people like Kirit Somaiya seriously,” he said. “It is his habit to level allegations whenever there are elections. He is doing it [now] as we are heading towards the BMC elections of 2022. All [the chief minister’s] properties have been listed in the declaration made by him. Somaiya’s son, who is a corporator in the BMC, is facing charges of extortion and corruption. It would be better if Somaiya comes clean on that.” Somaiya has been getting threats for his exposés. He said that he is not bothered, but his family is worried. “I can understand their tension,”he said. “But I am not going to keep quiet. The BMC is a den of [the] mafia and I am going to take it down.”