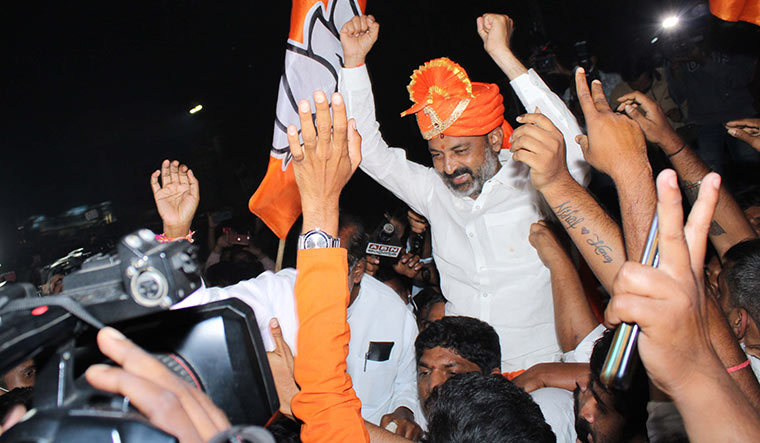 Change agent: Bandi Sanjay Kumar, the BJP’s state president, is seen as a major factor in the party winning 48 seats in the GHMC elections.

Telangana BJP president Bandi Sanjay Kumar said, “Pakistan or India. Who will you support in this match?” The venue was a locality of middle-class residents in Hyderabad. “Pakistan”, most likely, was a reference to the All India Majlis-e-Ittehadul Muslimeen (AIMIM) and its bastions, but “India” definitely meant the BJP. The “match” was the Greater Hyderabad Municipal Corporation (GHMC) elections.

It is understandable why Kumar chose this metaphor. An India-Pakistan cricket match led to events that increased his political profile. In the 2011 cricket World Cup, India beat Pakistan in the semi-finals. During the victory celebrations in Karimnagar, in northern Telangana, locals spilled out onto the streets. They spotted a group of men with green flags. It was assumed that they were flying Pakistani flags; tempers ran high, leading to a scuffle. The police registered a case. Kumar, who had just finished his first term as a corporator, was one of the accused. The case is now a footnote in the story of the rise of Karimnagar’s “Hindu tiger”.

Till about a year-and-a-half back, Kumar’s highest elected post was municipal corporator and the most significant position he held in the party was city president, Karimnagar. Even BJP cadre in rural parts of Karimnagar district did not know much about him. Now, Kumar, 49, is an MP and the president of the state unit. He is credited with turning the BJP’s fortunes in Telangana. A 10-day campaign by Kumar, filled with communal rhetoric and diatribes, is seen as a major factor in the BJP winning 48 seats in the GHMC elections this time from four seats in 2016. Its vote share increased from 10 per cent to 35 per cent, almost equalling that of the ruling Telangana Rashtra Samithi (TRS), which was the single largest party. It is the BJP’s best performance ever in the GHMC polls.

Kumar said that his party would conduct a “surgical strike” in the old city of Hyderabad to flush out illegal immigrants and “break” the headquarters of the AIMIM. As Kumar is not from Hyderabad, he did not have to balance politics with personal relations like how BJP leaders from the city had to, said a party insider. So, he spoke unabashedly.

A mini version of this style of canvassing had already played out in Karimnagar. Kumar had contested the 2014 and 2018 assembly elections from there on a BJP ticket. A one-time aide of Kumar’s, who requested anonymity, said that his main election promise for both polls was that he would pull down the wall of an eidgah (enclosure for Eid prayers), which was disrupting traffic. “At one gathering he even said he will unfurl a saffron flag at the site,” said the former aide. “Sanjay has always been known to make aggressive communally sensitive statements and it definitely seems to have worked for him.”

An energetic speaker, Kumar has a penchant for catchy phrases and mannerisms. During the campaign for the civic polls, his signature move was grinding his teeth with an angry expression. He would ask the crowds to react the same way when members of the ruling party approached them soliciting votes.

The BJP’s old guard in the state was reserved in its criticism of chief minister and TRS supremo K. Chandrashekhar Rao. Kumar, who took over as party state president in March, does not hold back. He has said that the initials KCR stands for kachara or trash and openly calls the chief minister a drunkard. Kumar’s knack for identifying elements that can stir up emotions was seen during the 2019 general elections. The TRS candidate was in an advantageous position until, ironically, Rao attended a public meeting in Karimnagar. He used the phrase “Hindu gallu... bondhu gallu” to drive home the point that the BJP was exploiting Hindus. This line caught on like wildfire and Kumar capitalised. The result was that a large number of Hindu youth rallied behind him and he won with a margin of more than 89,000 votes. In the build up to the civic body polls, Kumar announced that traffic challans of two-wheelers would be waived off if the BJP won the mayor’s post. He based this manifesto promise on the premise that youth in the old city were let off without traffic penalties, while others were being unnecessarily penalised.

Hailing from a middle-class family in Karimnagar, Kumar is known to be the Rashtriya Swayamsevak Sangh’s blue-eyed boy and his sudden elevation is attributed to his RSS affiliation. According to people close to him, Kumar’s popularity in the initial days was more because of his religious activities than political work. He built Lakshmi and Saraswati temples in Karimnagar and organised Hanuman jayanthi rallies on a large scale every year. As a young kar sevak, Kumar went to Ayodhya to support the Ram Janmabhoomi movement.

Did the new version of the BJP, under Kumar’s leadership, disturb Hyderabad’s communal harmony? Kumar does not believe so. “I am only stating facts,” he said. “Is it not true that Rohingyas are staying in Hyderabad and are being used as vote banks? Why are the AIMIM and the TRS feeling bad if I use harsh words against illegal immigrants? If the TRS and the AIMIM is indulging in appeasement politics for 12 per cent Muslim voters, what is wrong if I ask Hindus, who constitute majority, to vote for the BJP? These parties are communal and not the BJP.” 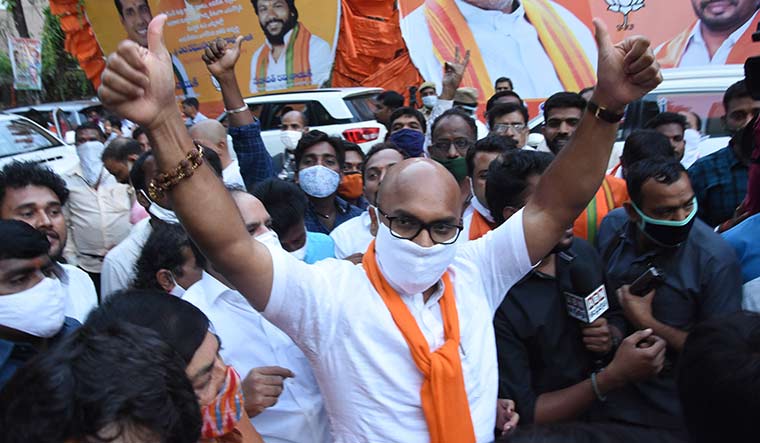 Tough language: D. Aravind’s father was the Congress’s state president and a minister.

The central BJP leadership is said to be impressed with Kumar and have given him its blessings and a free hand. “They told me to keep fighting,” he said. “This is just the beginning. There will be an intense campaign leading up to the 2023 assembly elections.” He believes the BJP will come to power in Telangana, for the first time, in 2023.

Apart from Kumar’s efforts, a major contribution to the BJP’s growth in the state has come from the TRS. In the last six years, the ruling party has opened its gates to more than 35 MLAs and MPs from the Congress, the Telugu Desam Party and the left parties. While these parties were weakened systematically, the BJP remained unscathed. The first signs of the BJP transforming from a party with negligible presence to a potential challenger were seen during the 2019 general elections. It won four out of the 17 seats. Among its winners was Dharmapuri Aravind, at Nizamabad. Like Kumar, the BJP propped up Aravind. He was so in demand as a campaigner for the civic polls that he attended more than 50 road shows and public meetings in 10 days. Aravind minced no words while attacking the Rao family and AIMIM president Asaduddin Owaisi and his family.

“Listen to me Akbaruddin (Asaduddin’s brother and MLA), once the BJP government comes to power in the state, I will keep you, your brother and your party near my feet,” Aravind said during a road show. This was in reaction to Akbaruddin saying that any chief minister in the state has to bend before the AIMIM. When asked about the strong language he used in his reaction to Akbaruddin, Aravind said he was an admirer of former Andhra Pradesh chief minister and Congress leader Y.S. Rajasekhara Reddy. “Our family was close to him,” said Aravind. His father, D. Srinivas, was state Congress president and a former minister. Srinivas is now a Rajya Sabha MP in the TRS fold. Aravind calls himself a “Modi follower” and believes that India is a “Hindu rashtra”, considering its composition and culture.

Aravind said there was no correlation between the BJP’s ideology and the lack of Hindu-Muslim unity. “Communal riots have happened in this state and not in BJP-ruled states,” he said. “The chief minister or his son (cabinet minister K.T. Rama Rao) did not even visit the places where Hindus suffered. The definition of communal riots is not only when Muslims are affected.”