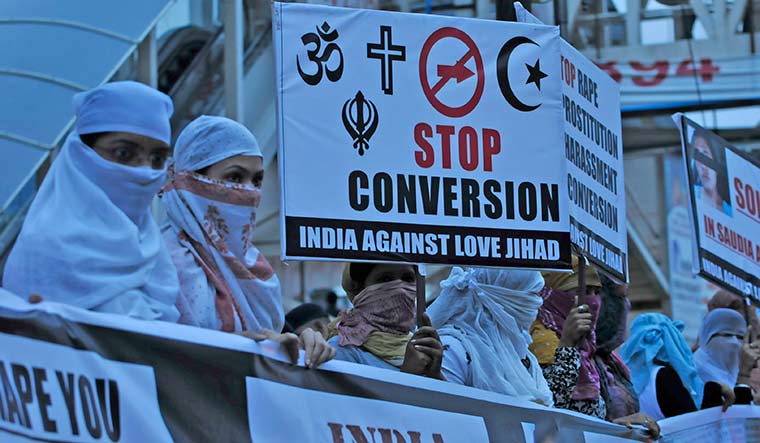 Fearing and Othering: A protest against love jihad and forced conversions at MP Nagar, Bhopal, in 2014 | Getty Images

On the eve of the bypolls in Madhya Pradesh, a stern-looking Chief Minister Shivraj Singh Chouhan announced: “Love ke naam par koi jihad nahi hoga (there will be no jihad in the name of love).” And, if someone tried to do it, he continued, they will be set right. “Legal provisions will be made for this,” he told the media. It did create a flutter, and might have helped consolidate the Hindu votes for the BJP. The party won 19 of the 28 seats, helping it attain a simple majority in the assembly.

That statement by Chouhan, however, was a signal of things to come. On November 17, Home Minister Narottam Mishra announced the Madhya Pradesh Religious Freedom Bill, 2020. Chouhan, following the bypolls, was reportedly on a holiday then.

Mishra, considered close to Union Home Minister Amit Shah, said that under the proposed legislation, marriages by force, fraud or allurement for the purpose of religious conversion will be declared null and void. A non-bailable and cognisable offence, it would attract a rigorous imprisonment of five years, Mishra said. Also, the co-accused in the case would be awarded the same punishment. However, action would only be initiated on the complaint of the person who was converted or his or her immediate family. The district administration would have to be notified a month in advance of any such conversions. Mishra said that the bill will be tabled in the assembly in the upcoming winter session, to be held in December or January.

Activists and the opposition have raised questions over the need for such a bill. They said the state already has laws that prohibit religious conversion through force, fraud and allurement (Madhya Pradesh Religious Freedom Act, 1968) and marriages through force or inducement (section 366 of the IPC).

While Mishra told The WEEK that the bill will be an amendment to the 1968 act, additional chief secretary (home) Rajesh Rajora said that it would be a new law that would replace the 1968 act. “The name of the proposed legislation being the same (as the 1968 act) might have created the confusion,” he said. He added that the bill will focus on marriages through force, fraud and allurement for the purpose of conversion.

Activists also questioned the constitutionality of provisions like prior intimation of inter-religious marriages to the district administration. But what miffed them the most was the use of the term ‘love jihad’ in the context of the proposed legislation, seeing it as an affront to the Muslim community. 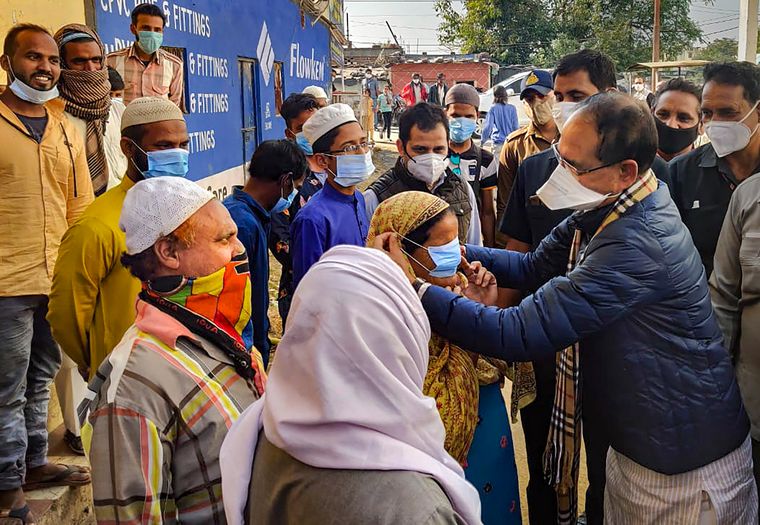 Stealing them blind: Shivraj Singh Chouhan maintained a moderate image in the past three terms to win Muslim votes. But now he wants to stamp his position as a Hindu leader | PTI

Mishra, however, was cautious and disassociated himself from the term, saying it was coined by the media. “There has been an upswing in the cases (of religious conversions through marriages using force, fraud or allurement), which in your (media) language is called love jihad,” he had said. But, in his tweet, he clearly said that love jihad meant marriages through force or allurement for purpose of conversion.

Activists said that there was no doubt that saffron outfits and the BJP had often used the term to describe marriages involving Hindu women and Muslim men. And the bill in Madhya Pradesh, like in many other BJP-ruled states, is an attempt to gain political mileage by opposing inter-religious marriages, they said.

Mishra told THE WEEK that the legislation was proposed now as several “such marriages” were being reported across the country. He added that the Madhya Pradesh government, too, had received intelligence reports about instances in the state. 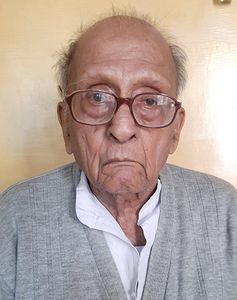 Chouhan, too, told THE WEEK that the state had seen instances of conversions for marriages through force, fraud or allurement. “Our aim is to protect our daughters,” he said. “However, the modalities of the proposed law are still in process of finalisation and details will be shared at the right time.”

But Lajja Shankar Herdenia, national convener of All India Secular Forum, denied coming across any such incident in the state. “It is the habit of the BJP and the RSS to keep doing things that would create tension and division in the society,” he said. “This allows their governments to avoid talking about issues like unemployment and starvation.”

Herdenia added that all attempts to empower Hindu women have been historically opposed by the RSS. Even the Hindu Code Bill, which gave Hindu women the right to divorce, was strongly opposed by the RSS, the Hindu Mahasabha and other right-wing outfits, he said. The constitution of the RSS says that its membership is open only to Hindu men, said Herdenia, so they, of all people, do not have the right to talk about women’s rights.

Activist and writer John Dayal said that the concept of love jihad was being used by the RSS and the BJP as a political instrument to radicalise its core constituency, now that the Ram Mandir issue was over and the cow slaughter controversy had lost steam.

Meanwhile, the Muslim community is vocal about its objections. The Muslim Vikas Parishad in Bhopal has asked the state government to clarify the legal and constitutional definition of the word jihad. The Parishad’s objection is to the use of a “holy” word in the wrong context; it does not want the word to be used in the legislation and in public statements. It has also asked the government to publish the list of all inter-religious marriages cleared between January 2018 and November 2020, the details and reasons of all such marriages that had ended.

Supreme Court lawyer Haji Mohammad Haroon, who is also the chairman of the state unit of the Jamiat-Ulema-e-Hind, said the bill is unconstitutional and against freedom of religion. Marriage, he said, is a personal choice. Also, while there were several instances of conversions in interfaith marriages, there were also instances where the spouses, be it Hindu or Muslim, did not convert, he added. “The proposed law will simply be a way to harass the middle class, as no one bothers to see what is happening in poor settlements and no one dares to question the rich and the influential,” said Haroon.

He also said that jihad was being used to target Muslims. “Jihad has a totally different meaning as it connotes steps to be taken to eradicate religious evil,” said Haroon. “Eradication of evil could be through action, verbal opposition or even by thinking bad of the evil in one’s heart. It has nothing to do with terrorism, as is often [misconstrued]. In my view, the actual jihad was the one done by Lord Ram who waged a battle against the evil Ravana.”

J.P. Dhanopia, Congress spokesman and lawyer, pointed out that ‘love jihad’ had no legal definition and the BJP government would not be able to include it in the proposed legislation. “But they are playing the music of ‘love jihad’ big in the background of the proposed law with the clear intention of creating hate and division in the society, as is their agenda,” he said. He, too, questioned the need for another law when there were laws already in place to prohibit religious conversion and forced marriage.

Madhya Pradesh was among the first few states in the country to bring in a law against religious conversions through force, fraud or allurement in 1968. States like Odisha, Chhattisgarh, Gujarat, Himachal Pradesh, Arunachal Pradesh, Jharkhand and Uttarakhand have similar laws.

The 1968 act was promulgated by the Bharatiya Jana Sangh-led Samyukta Vidhayak Dal government. Herdenia, who is also a veteran journalist, said that the act was brought in to stop the alleged conversions through allurement to Christianity in the state’s tribal pockets. The punishment accorded was imprisonment up to a year or a fine up to 05,000. In cases where minors, women and people belonging to the scheduled castes and scheduled tribes were involved, the imprisonment could go up to two years and the fine up to 010,000. Also, the priest or the person who converts another had to notify the district magistrate within seven days of the conversion. The act, however, does not have any provisions on inter-religious marriages.

In 1977, the High Court upheld the 1968 act, saying that the relevant sections “establish the equality of religious freedom for all citizens by prohibiting conversion by objectionable activities such as conversion by force, fraud and by allurement”. A constitutional bench of the Supreme Court also later upheld the act, saying that “right to propagate (religion) was distinct from right to convert”.

After the BJP government came to power in Madhya Pradesh in 2003, two unsuccessful attempts were made to make the 1968 act more stringent—both times Chouhan was chief minister.

Herdenia said that they met the then governor Balram Jakhar and urged him not to sign the amendment bill. “The governor then referred the matter to the president of India and on the basis of the advice of the attorney general that it was ‘ultra vires and unconstitutional’, the president refused to grant it assent,” he said. The ground for holding the amendment unconstitutional was that it “violated the freedom of religion guaranteed in the Constitution because it insisted on prior permission (for conversion)”.

“We again approached the governor (Ram Naresh Yadav) and informed him about the earlier decision of the president. The governor did not sign the 2013 amendment bill,” said Herdenia. “We will do whatever is necessary to stall the proposed legislation of 2020, including the option of approaching the courts.”

A push for power?

Political analyst Manish Dixit has another take on the controversy. He looks at it as a game of one-upmanship between Chouhan, Uttar Pradesh Chief Minister Yogi Adityanath and other second-rung BJP leaders.

“This is a preparation for the future, perhaps as early as 2023, when it seems Narendra Modi will not be the prime minister,” said Dixit. “Who will fill the vacuum then? Among BJP leaders, Chouhan, being a four-time chief minister, is politically more experienced than even Home Minister Amit Shah and BJP president J.P. Nadda. He is popular, is an OBC and has a good RSS connect.”

Chouhan’s statement on the proposed legislation came immediately after Yogi announced his intention to bring in a similar law. He also constituted a cow cabinet and banned firecrackers that came from China and those that had pictures of deities on packets. He also got Congress MLA Arif Masood booked for leading a protest against French president Emmanuel Macron over his comments on Islam and even had Masood’s ‘illegal’ property partially razed.

“It looks like Chouhan wants to further impress the RSS and stamp his position as a Hindu leader. He also wants to keep the BJP top leadership happy by trying to implement its guidelines and decisions in the state with alacrity,” said Dixit. “In the past three terms, Chouhan maintained a moderate image, even hugging Muslims on Eid. A large chunk of Muslims here switched over to the BJP only because of Chouhan. Having done that, he does not want any minus marking on the RSS records and these are attempts in that direction.”