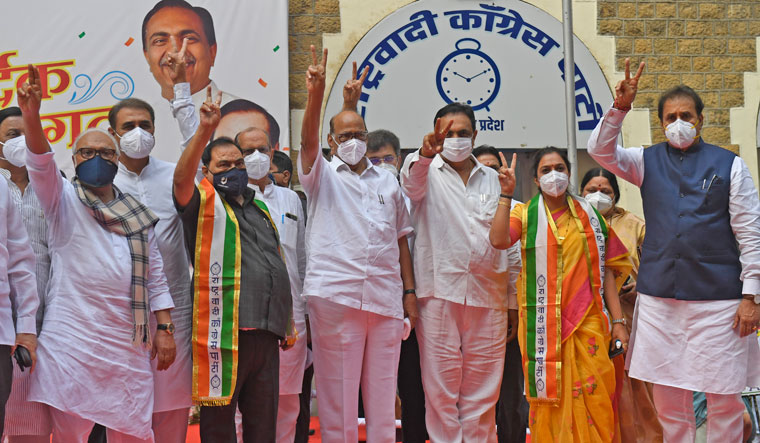 Shift time: Eknath Khadse (in black shirt) joining the NCP with daughter Rohini Khadse (in yellow sari) in the presence of senior leaders of the party | Amey Mansabdar

On October 23, the BJP in Maharashtra received a rude jolt. Its senior-most leader, Eknath Khadse, quit the party and joined hands with Sharad Pawar and his Nationalist Congress Party. Khadse’s exit is likely to hit the BJP very hard in north Maharashtra, where his acumen and organisational skills had consistently helped the party perform well in elections. A grassroots leader, Khadse had felt humiliated and alienated in the BJP since 2016, when he resigned as minister in the Devendra Fadnavis government.

Khadse began his political career as a sarpanch more than four decades ago. He was instrumental in building grassroots reach for the BJP in Jalgaon, Dhule and Nandurbar districts. At various times, he was minister of finance, revenue and agriculture. In fact, it was Khadse and his late party colleague Gopinath Munde who took Fadnavis under their wings and brought the young legislator to the front benches in the assembly.

After Munde died in June 2014, Khadse became the senior-most BJP leader in Maharashtra. He was also leader of the opposition. So when the BJP emerged as the single largest party after the 2014 assembly polls, Khadse hoped that he would be asked to form government. But Prime Minister Narendra Modi chose Fadnavis, and Khadse had to be content with being the number two in the cabinet.

Thus began Khadse’s downfall in the BJP. A no-nonsense speaker, Khadse soon gained the reputation of a motormouth in cabinet meetings. He could never come to terms with the fact that he was serving under someone who was more than two decades his junior. Khadse began running more than a dozen ministries, as if he was the chief minister. The clashes were inevitable.

Khadse had to step down as minister after it was alleged that he had allotted government land to his relatives and that he had links to the gangster Dawood Ibrahim. Fadnavis, who had earlier given clean chits to cabinet colleagues who faced corruption charges, forced Khadse to resign. As if the humiliation was not enough, Khadse also faced a corruption inquiry. The denial of a party ticket to contest the 2019 assembly polls was the last straw. The BJP gave the ticket to Khadse’s daughter Rohini, who was defeated by a Shiv Sena rebel.

Khadse is the tallest leader of the Leuva Patil community, which belongs to the Other Backward Classes and has a strong presence in north Maharashtra. Natha bhau, as Khadse is popularly known, is the last word in many villages and taluk panchayats in the region. With Khadse gone, the BJP will now have to rely solely on Girish Mahajan—an OBC leader, but not a Leuva Patil. Mahajan is known as a troubleshooter, but local people say his clout is limited to Jamner, his assembly seat. Also, his words do not carry weight when the BJP is not in power.

Khadse, however, is widely respected across north Maharashtra. The Leuva Patils, who are mostly farmers, had been Congress supporters before leaders like Khadse and Munde rose as a result of the BJP’s “social engineering”. Because the Marathas never voted for the party, the BJP had focused on OBC communities.

BJP insiders see three long-term effects of Khadse’s exit from the party. First and foremost, its impact on the Leuva Patil community. Second, Khadse’s exit will strengthen the feeling that OBCs are not as dear to the party as they once were. The feeling was spawned when Khadse and Chandrashekhar Bavankule, minister and Teli leader in Vidarbha, were denied party tickets. The third effect is the possible disillusionment of party members who were denied their due when Fadnavis inducted outsiders and gave them plum posts.

“So far, no big BJP leader had been able to quit the party and remain relevant in politics after joining other parties,” said a BJP source. “But Khadse has now shown the way. I won’t be surprised if other loyal OBC leaders who are feeling sidelined follow suit in the months to come.”

A section of BJP leaders is questioning Fadnavis’s strategy to woo the Marathas. He brought in reservation for the community—something which even Maratha chief ministers had failed to do. The decision apparently alienated the party’s core OBC base. The BJP, which had single-handedly won 122 seats in 2014, could win only 105 seats even after joining hands with the Sena. “OBC alienation definitely had an impact in Vidarbha and north Maharashtra, where the party had sidelined veterans like Khadse and Bavankule,” said the party source.

Khadse will be hoping to become a minister soon, even though there are no vacant berths in the cabinet. One of the NCP ministers will have to quit if Khadse has to be inducted. That may not happen anytime soon, but he will be rewarded with a seat in the legislative council.

For now, Khadse has trained his guns on Fadnavis, who remains the tallest BJP leader in the state. He says he has no complaints about the BJP’s national leadership, and that his fight is with Fadnavis. “In every election since 1989, Jalgaon district has sent two BJP MPs to Delhi,” Khadse told Pawar after joining the NCP. “This will change: We will send NCP MPs in 2024.”