Battle for the centrepiece 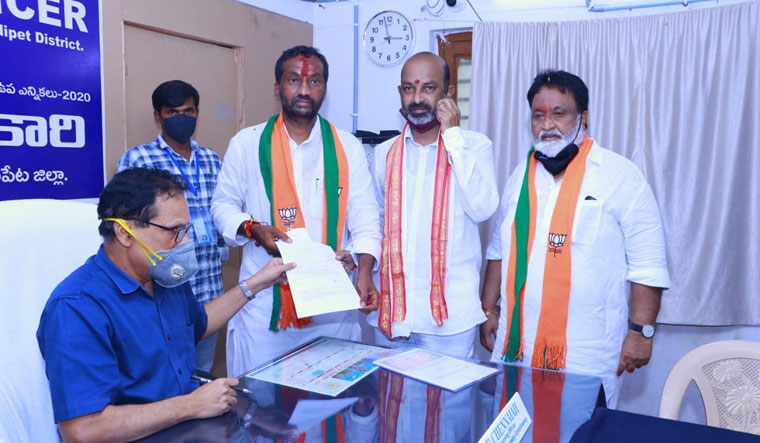 Dubbaka assembly constituency in central Telangana is electorally significant because of the constituencies near it. Dubbaka borders Gajwel, represented by Chief Minister K. Chandrashekar Rao aka KCR, to the south. To Dubbaka’s north is Sircilla—represented by KCR’s son, IT Minister K.T. Rama Rao—and in the east is Siddipet, held by Finance Minister Harish Rao, KCR’s nephew.

Dubbaka fell vacant after the death of S. Ramalinga Reddy of the Telangana Rashtra Samithi (TRS) and the bypoll is scheduled for November 3. But, what could have been a comfortable win for the ruling party, riding on the emotions attached with Reddy’s death, is turning into an interesting political contest. The reason? The BJP and the Congress identified three poll issues—the three high-profile constituencies nearby.

They have accused the three ministers of developing their own constituencies while “neglecting” Dubbaka, which was not held by a family member.

The first mover was the BJP’s M. Raghunandan Rao, who hit the streets even before his candidature was announced. Raghunandan was once a close associate of the chief minister and held important posts in the ruling party. After joining the BJP, he lost both the 2018 assembly elections and the 2019 Lok Sabha polls.

“Gajwel looks like Jubilee Hills (an upscale area in Hyderabad), while Dubbaka looks like a poverty-stricken area,” says Raghunandan. “There are no decent roads or colleges.” He has been going from house to house with this message. “Since 2016, the district has received hundreds of crores in funds,” he says. “Why did the chief minister’s Gajwel get Rs434 crore and finance minister’s Siddipet Rs180 crore, while Dubbaka only got Rs10 crore? People are becoming aware of the neglect.” Raghunandan enjoys a favourable image among the youth. A lawyer, who has also worked as a journalist, he is known for his sharp oratory skills.

The Congress candidate is Cheruku Srinivas Reddy, who was with the TRS until recently. He is banking on the image of his late father, former TRS leader and minister Cheruku Muthyam Reddy, who had endeared himself to the people of Dubbaka with his commitment towards its development. He is also pointing out the development in the Rao clan’s constituencies. “People have to decide if they want a rubber stamp or a genuine leader,” says Srinivas Reddy. “I am confident people will vote for me as they know that I will fight for funds and other allocations.” The Congress is looking at the bypoll as a first step towards its revival in the state; the BJP, which has just one MLA, is hoping to make this a building block for the 2023 assembly polls. For TRS, retaining the seat has become a matter of prestige. S. Sujatha, wife of the deceased MLA, has been given the ticket. And, master strategist Harish Rao is the face of the campaign. Aiding the finance minister are six MLAs.

For Harish Rao, the bypoll is important at a personal level. For starters, Raghunandan is an old foe. Moreover, Harish Rao is seen as one of the top contenders to succeed KCR. A grand win in Dubbaka could cement his claim.

Another factor is the Greater Hyderabad local body elections (likely to be held this year). Since Dubbaka is close to Hyderabad, it is believed that the results will have some impact on the civic body elections. Harish Rao is confident that the party will win the bypoll and “create a record”. 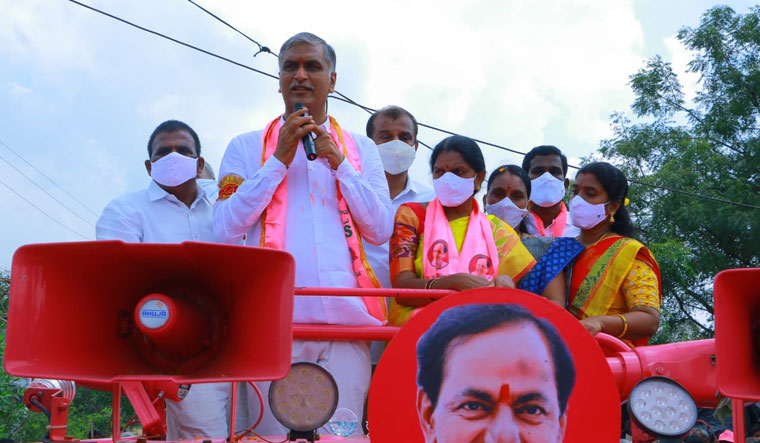 There have also been allegations about misuse of power. Raghunandan alleges that Rs40 lakh, which was legal, was seized from him by the police and that the information was gathered by tapping his phone. He adds that those who want to join him are being discouraged by the TRS.

A week before the bypoll, the police raided the house of a relative of Raghunandan and seized Rs18.67 lakh, saying that it was for bribing voters. But, BJP supporters confronted the police, snatched the currency bundles and fled. A few hours later, the BJP launched protests and state president B. Sanjay was arrested as he tried to reach the constituency. As the byelection date got closer, the Congress seemed to be missing in action, and it was more like a straight fight between the TRS and the BJP.

Experts are not impressed by the opposition’s strategy of comparing constituencies. “Each constituency is different and cannot be compared like that,” says political analyst and former MLC Prof K. Nageshwar Rao. “I don’t think this campaign will have much impact on the elections.” TRS leader and chairman of Telangana State Forest Development Corporation Vanteru Pratap Reddy has been actively involved in the campaign. He is confident of victory. He says: “Every house in this constituency has benefitted from the welfare schemes of our party. Our win is inevitable. The BJP and the Congress are fighting for second place by talking about silly issues. For the opposition parties, it is a question of survival.”