The political equations in Bihar are changing 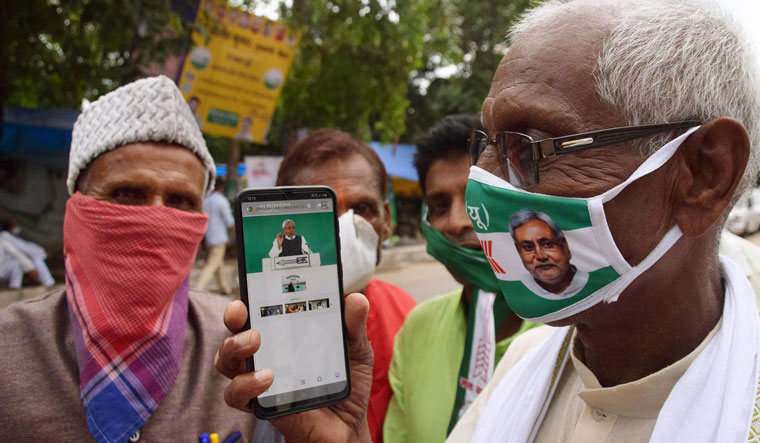 Bihar is set for an interesting, yet unpredictable contest. At the heart of the 2020 elections is a strong push to effect a generational change in the state dominated by Lalu Prasad, Nitish Kumar and Ram Vilas Paswan for the past three decades. In fact, this will be the first elections since the 1990s—when the Mandal Commission changed the politics of the Hindi heartland—without Paswan Sr and Lalu Prasad. The former had passed away in Delhi on October 8, while the latter, currently in jail, may only be released on bail just a day ahead of the election results—on November 10.

This change was visible in the reshuffle of political alliances in the state ahead of the elections. The two major opponents—the NDA and the Grand Alliance—had witnessed the exit and entry of partners in quick succession. Paswan’s Lok Janshakti Party, now helmed by his son Chirag Paswan, made a curious decision which could impact not only the outcome of this election, but also the entire political scenario in the state. The LJP announced that it will contest alone in 143 of the 243 seats—primarily focusing on seats fought by Chief Minister Nitish Kumar’s Janata Dal (United). Chirag cited reasons for his stance against Nitish Kumar, saying the latter had humiliated his father. The letter Chirag had written to the BJP chief, J.P. Nadda, detailing the reasons behind his decision to go solo was made public sometime before Paswan Sr’s death. Chirag said that the LJP has full faith in the BJP. He also indicated that he will not even shy away from using the name of Prime Minister Narendra Modi in the LJP’s campaign, which the BJP warned against. The BJP is pinning its hopes on Modi’s appeal to tide over any anti-incumbency that may be there in the state against Nitish.

The LJP conundrum left the JD(U) leadership jittery as they saw it as an attempt to hobble it. Two days after the LJP’s decision, and after an internal decision, the BJP reaffirmed its faith in Nitish Kumar’s leadership. “There should be no confusion on the issue of leadership,” said Deputy Chief Minister and senior BJP leader Sushil Kumar Modi. “Nitish Kumar is the chief minister candidate, and even in the post-poll scenario he will be chief minister. Four parties are contesting together—the BJP, the JD(U), the HAM (Hindustani Awam Morcha [Secular] led by Jitan Ram Manjhi) and the VIP (Vikassheel Insaan Party led by Mukesh Sahni). He will win with a three-fourths majority.”

But the LJP’s move has given rise to speculation as both the BJP and the JD(U) are contesting on almost an equal number of seats. The JD(U) will have 122 seats to contest, of which it will give seven seats to the HAM, while the BJP will have 121 seats, of which it allotted 11 seats to the VIP. If the JD(U) were to get fewer seats because of the LJP, it may lead to clamour within the BJP for the top post. The LJP has already said it will support the BJP in the state after elections. This will fulfil the BJP’s desire to be the lead player in the state rather than play second fiddle to a regional satrap.

On the other side of the political divide, the Rashtriya Janata Dal-led Grand Alliance lost three partners—Jitan Ram Manjhi, Upendra Kushwaha (Rashtriya Lok Samta Party) and Mukesh Sahni—as they dared to question the leadership of RJD’s de-facto supremo, Tejashwi Yadav. The RJD has now joined hands with the left parties; the Congress is already a partner.

Smaller parties that command pockets of influence have also formed regional alliances to try out their luck. Kushwaha has aligned with Mayawati’s Bahujan Samaj Party to form the Grand Democratic Secular Front. Asaduddin Owaisi-led All India Majlis-e-Ittehadul Muslimeen and Devendra Prasad Yadav-led Samajwadi Janata Dal (Democratic) have also joined this alliance. Kushwaha is the chief minister face of this alliance.

Bhim Army chief Chandrashekhar Azad Ravan’s new political outfit, the Azad Samaj Party, will make its electoral debut in alliance with Pappu Yadav’s Jan Adhikar Party (Loktantrik) under the banner of the Progressive Democratic Alliance. The Social Democratic Party of India, the Bahujan Mukti Party and the Indian Union Muslim League are the other parties in this alliance.

Another factor that is powering a change in Bihar’s electoral politics is the changing demography of voters. Since the 2019 Lok Sabha elections, the number of voters in the state has increased by over 20 lakh to reach 7.29 crore. This includes first-time voters, and over 2.3 lakh migrants who had returned home during the pandemic.

The 29-year-old chief ministerial candidate of the Grand Alliance, Yadav, has already promised to create 10 lakh jobs if he comes to power. The RJD draws its power from the fact that nearly 9.5 lakh people have registered in its digital portal for unemployed youth, launched on September 5. The portal also got 13 lakh missed calls since its launch. Bihar has seen widespread loss of livelihoods and unemployment because of the Covid-19 pandemic. A recent Centre for Monitoring Indian Economy survey has pegged the unemployment rate in the state at around 46 per cent—three times that of last year.

Yadav is cautious about seat sharing after the bitter experience of his father Lalu Prasad, who had said while accepting Nitish Kumar as chief minister candidate in 2015 that he was ready to drink any poison to keep communalism at bay. Though the RJD had won 80 seats, they accepted Nitish Kumar, who had 71 seats, as the chief minister. But Kumar left the Grand Alliance in 2017 to join hands with the BJP. The RJD realised that its votes helped alliance partners win, but the latter’s votes were not transferred to them during elections. So, this time the RJD will contest in 144 seats, the Congress in 70, and left parties in 29.

In order to counter the RJD’s youth-centred approach, the BJP immediately sent its newly-appointed Yuva Morcha chief and Bangalore South MP, Tejasvi Surya, to Patna. “Tejashwi Yadav and Rahul Gandhi should not talk about employment,”said Surya. “They themselves are unemployed. It is the Narendra Modi government which has created jobs for the youth.”

Like Yadav, Paswan Jr is also focusing on his image as a “young leader”. He has singularly made ‘Bihar First, Bihari First’, a slogan for change in the state, his uncompromising choice.

The JD(U), on the other hand, is trying to build a narrative based on 15 years of rule of Nitish Kumar vs 15 years of Lalu Prasad. The effort is to revive the memories of the “poor law and order situation”in the state during Lalu’s “misrule”. But the campaign may have its limitations. Nitish Kumar has built his reputation around doling out development schemes where women are one of the biggest beneficiaries. During the 2019 Lok Sabha elections, the state witnessed higher women voter turnout as 60 per cent of them cast their votes. Coupled with Prime Minister Modi’s appeal, the ruling JDU-BJP combine is looking for an encore.

What is worrying JD(U) leaders is the criticism over the state of affairs in terms of development and job creation. “Many people say that Nitish Kumar’s first tenure was better than his other terms,”said Sanjay Kumar Jha, state water resources minister and JD(U) general secretary. “It was better as he got the state in a hopeless condition, and he helped it get out of it. As he set the benchmark very high [during the first tenure], it led to higher expectations. Ask people what we have done. See how much work we have done in creating infrastructure.”

Another big factor in the Bihar elections is caste. The NDA expects support from a bouquet of castes. Apart from the state leaders, the BJP has roped in former Maharashtra chief minister Devendra Fadnavis and Tejasvi Surya to handle the elections in the state. Both are brahmins—ideal choices—as the saffron party is trying to woo the forward castes. Meanwhile, the Grand Alliance’s focus is primarily on the Yadav and Muslim vote banks, which have 14 and 17 per cent population in the state, respectively. The Congress appeals to forward castes and dalits, too. The left parties are joining hands with the alliance as they also have pockets of influence across the state; the Communist Party of India (Marxist-Leninist) had won three seats in 2015.

The parties are looking for emotive issues, too, to win over people. There were efforts to use Bollywood actor Sushant Singh Rajput’s death, too, as an election issue, as the actor’s family hails from Purnea in Bihar.

As the electioneering picks up amid the pandemic, the state claims to have recovered fast from infections. State Health Minister Mangal Panday said there were only 10,450 active cases in the state and it has a 94 per cent recovery rate—the highest in the country. But what remains to be seen will be the state government machinery’s ability to ensure a free and fair election, keeping social distancing norms in mind.